You are here: Home » Articles filed under: 'News' » Article: 'The Diorama Dilemma' 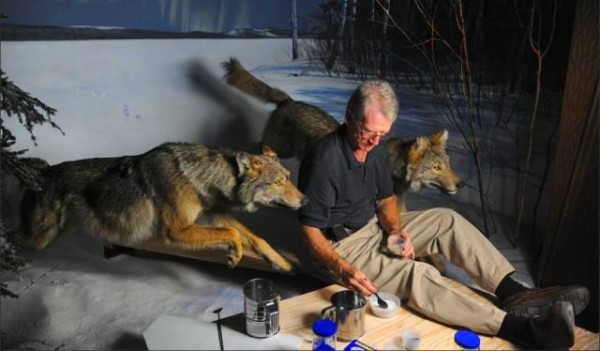 Max Kutner, Museum Dioramas Are as Endangered as the Animals They Contain, 2 August 2015

Aliens chose Devils Tower in Wyoming as their landing site in Close Encounters of the Third Kind. President Teddy Roosevelt made it America’s first national monument, and later a taxidermist for the American Museum of Natural History (AMNH) in New York visited the spot to collect mule deer specimens for a habitat diorama.

The diorama, completed in the 1940s, is now one of at least 117 at the museum, and Michael Novacek’s favorite display. “I can almost feel the air. It’s so perfect. The little amount of haze, the clouds floating by. It’s so transporting,” he says during a recent visit, without looking away from the diorama. A deer stands perched with its majestic antlers framing the Devils Tower rock formation painted in the background. Another deer sniffs the sloping ground behind a needley shrub. Novacek, the museum’s senior vice president and provost for science, folds his arms, shakes his head and says, “Just amazing.”

Since museums began constructing them more than a century ago, habitat dioramas have carried millions of visitors to other times and places. The mule deer display triggers such an emotional response from Novacek because it reminds him of when he was a graduate student, studying extinct mammals near Devils Tower. Not that one needs a personal connection to feel its power. A few display cases away, visitors are practically climbing over one another to get a better look at the jaguars. There’s a chorus of whoas and oh my gods, and one kid says with awe, “It looks so real!”