May 11th, 2017 | Browse other: News. | Tagged with: Nicobar pigeon found in the Kimberley, Western Australian Museum | 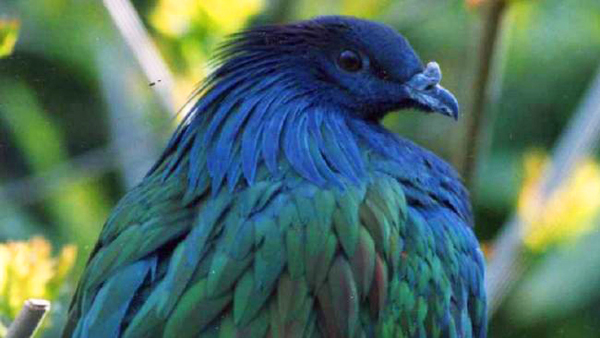 A Nicobar pigeon has been found in the Kimberley. Photo: The Australian.

Victoria Laurie, The dodo’s gorgeous island-hopping relative finds its way to our shores, The Australian, 5 May 2017

A gorgeously plumed pigeon ­described as the closest living descenda­nt of the now extinct dodo has been found by Aborig­inal rangers in the Kimberley.

The Nicobar pigeon has never before been found on the Australian mainland, but was spotted by Bardi Jawi rangers walking across a road near monsoon vine thickets at Chile Creek on the Dampier Peninsula last month.

Since then there have been numerous sightings and earlier this week a juvenile bird was capture­d 40km away by children in the front yard of a house at One Arm Point, near Broome.

“It was definitely a strange bird to all of us,” says Bardi Jawi ranger co-ordinator Phillip McCarthy, who says his rangers handed over the captured Nicobar pigeon to quarantine officers as part of their biosecurity role in protecting the Kimberley coast.

“I’ve lived here all my life and I’ve never seen one. We don’t know how the bird got here — whether it flew all the way, if it island­-hopped or came by boat.”

With rainbow-hued adult plum­age and a knob on its nose, the iridescent bird is named after the Nicobar Islands, one of the most isolated island chains in the world, in the Bay of Bengal.

But pigeon flocks have a tendency to hop islands in search of food, so the species range extends down to the Malay Archipelago, The Philippines, New Guinea, Indones­ia and Solomon Islands.

The closest it has been recorded to Australia previously was in 1989, when a single bird landed on an oil rig in the Timor Sea.

The pigeon species, which is listed by the International Union for Conservation of Nature as near-endangered, could be taking­ up residence on the Kimberle­y mainland and on its isolated and protected islands.

The Bardi Jawi rangers hope the captive bird may eventually be able to be released back into their local vine thickets, although they worry about dog and cat pred­ation.

“It has magnificent colours, like a bird from the rainforest,” says Mr McCarthy. “Perhaps it decided to make a home here.”