You are here: Home » Articles filed under: 'News' » Article: 'The dog that flew planes:'

The dog that flew planes: 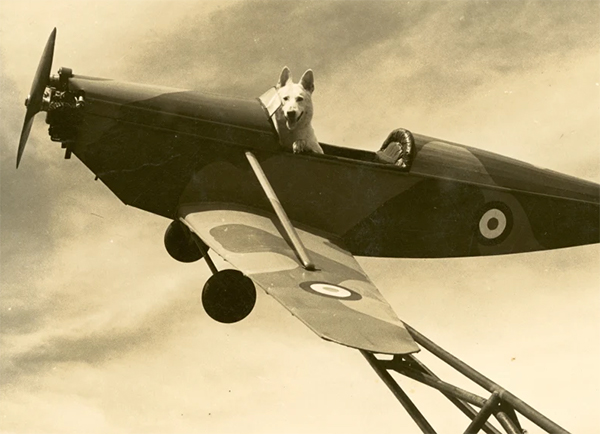 Australia’s museums are (gradually) reopening. Under lockdown, their collections were still viewable online – and it gave some hidden treasures a chance to find the spotlight. We asked leading institutions to nominate some favourites. 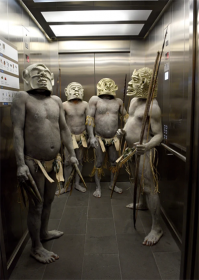 The Asaro Mud Men of the Eastern Highlands of Papua New Guinea at the Australian Museum in 2016. Credit: Steven Siewert.

These gruesome, otherwordly mud masks are made by the Asaro people from the Eastern Highlands of Papua New Guinea. Created more than 100 years ago, they were designed to ward off enemies. Preparing for a raid on people wanting to steal their land, instead of smearing themselves with ash as was common, they made masks with terrifying, disfigured expressions.

The masks, still made today, are formed from a special clay that is dug up, cleaned and rolled into layers, then fashioned into an oval. The mouth and other features are then carved into them, each one an individual work; they are very heavy.

The Asaro community is made up of several tribes and numerous smaller clan groups living at the foot of Mount Daulo and the start of the great Asaro Valley that runs east towards Goroka in the Eastern Highlands Province of Papua New Guinea.

A clay mask from the village of Komunive in Papua New Guinea. Credit: Abram Powell.

These are the first masks of this kind for the Australian Museum’s collection and were a gift from the Asaro people. Four highland men visited Sydney in 2016 to present them, and wore them for a performance; they moved in what seemed like slow-motion around the crowd, almost ghostlike.

Michael Mel, manager for Pacific and International Collections, Australian Museum. The museum is closed for renovation until mid-2020.

Zoe the Police Dog was a household name in Australia in the 1930s and ’40s. One of the first dogs trained for the police force in Australia, she and her cohort were hugely popular.

A large, expensive manhunt led to the decision to create the dog force, inspired by success in the UK, where bloodhounds were used; they weren’t available here so German shepherds were trained instead. Dogs were used to track missing children, hunt for criminals on the run and sometimes to attack. 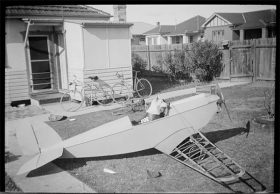 Zoe the Police Dog, with her plane under construction. Negatives unearthed from the Forensic Police Archive, Sydney. Credit: Justice and Police Museum.

A white German shepherd, Zoe was the first police dog in the world to respond to a radio signal, wearing a small transmitter attached to her harness.

She was also trained to do stunts at charity events, appearing to drive a car, a miniature tank, then a plane. The Sun reported she was a star turn at the February 1941 police carnival when she appeared to drive a specially constructed miniature car. The weight of the dog taking her seat in the car, on command, started the motor and enabled the vehicle to be steered by remote control.

Scotty Denham spearheaded the use of dogs in the force and Constable Eric Brown made the plane. Known as the Zoeplane, it had a wingspan of 16 feet and a fuselage length of 20 feet and could take off and land. Built as a charity fund-raising prop designed to have a dog in the cockpit, it was anchored to a long arm that revolved around a platform, counter-balanced by a weight that went up as the plane went down.

Even though the dogs were often featured in the magazines back then, these pictures from the Forensic Archive have never before been published. Zoe went deaf in her old age and died in 1946, in news that made the papers. 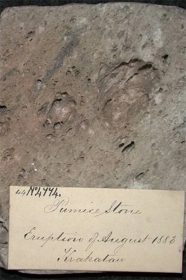 A piece of the pumice from the eruption of Krakatoa, which remains the world’s largest ever recorded. Credit: Museums Victoria.

This piece of Krakatoa pumice is a remainder of the biggest, most explosive volcanic eruption in recorded history. The island, between Java and Sumatra, blew up in March 1883.

Sonic booms from the eruption were heard thousands of kilometres away in Perth and Mauritius and threw an estimated 25 cubic kilometres of rock into the air. Official records said about 36,000 people were killed but the death tolls were undoubtedly greater.

The dust coloured sunsets around the world for many years. Munch’s scream is said to be inspired by Krakatoa’s eruption.

The pumice was donated by the director of the Javanese Geological Survey in 1889 to the National Museum of Victoria and is part of a suite of rocks from Java and Krakatoa. The rocks reveal how the lava has changed over time, how the magma was formed. Every geological specimen is a fossil of a historical event and tells you about a geological process that you may not be able to see now. 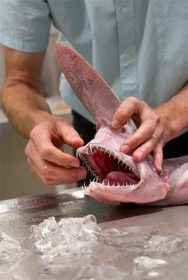 Unlike other sharks, the goblin shark has a snout. Its teeth are more like a screwdriver, long and pointy, as opposed to the more familiar white, triangular pointed shark teeth.

Common sharks feed using their teeth to cut pieces of meat, whereas the goblin uses its snout to detect electronic fields generated by living creatures – a fish or a crustacean buried under the soft sediment of the ocean floor – then uses its slingshot-like jaw to spear the prey. The jaw mechanism is unique; the top jaw is not fixed to the skull and when in action, both jaws move forward.

These bizarre animals are an example of the weird and wonderful things in the deep sea. Found in scattered localities around the Pacific, Atlantic and Indian Ocean, they are rarely encountered because they’re anywhere from 300 metres to more than a kilometre down. Finding one has been likened to flying over a rainforest in a helicopter with a bucket attached trying to catch a monkey.

They are not fast-swimming sharks and are quite flabby, with small fins, reflecting the fact that the goblin shark is a pretty lazy specimen.

First recorded by David Starr Jordan in 1898, the goblin shark can grow to more than four metres in length. Australian Museum has four specimens, two just over a metre, and two adults, which are 3.8 and 3.6 metres long. They were trawled off the south coast of NSW and donated to the museum.

Carved emu eggs can have up to 15 layers of colour; this one made by Esther Kirby is a bluey-green and features a dugong. She uses a scalpel to create them – when she gets down to the white it’s as thin as paper. The shadowing she can get on the egg is extraordinary, almost like you’re looking at a photograph.

To carve an emu egg requires patience, diligence and dedication; they have a hardy shell but they are very fragile.

Kirby is one of the most highly regarded emu egg carvers in Australia, one of a handful who continue the tradition in south-eastern Australia and the Carnavon region of Western Australia. She learnt from her father Uncle Sam Kirby, a world-renowned egg carver. He used a pocketknife to carve and before that a sharpened jam tin.

Egg carving has its history and traditions in the customary practice of carving; it became more popular in the early 20th century. Traditionally Aboriginal people carved on shields and clubs and incised markers onto possum skin coats, reflecting deep connections to maps of country, affiliations of clan and country; they are very significant to the maker and owner. 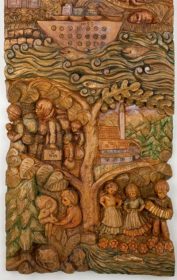 This elaborate wood-carving by Eva Schubert traces her life story. Her visual narrative is almost childlike. She came to Australia as a refugee in 1955 with her husband.

It starts in the bottom right, with her idyllic childhood in the forest, in what was then Czechoslovakia.

She became a refugee during the second world war, when millions of people were displaced, shown in the carving with people carrying their worldly belongings. In 1955, she and her husband came to Australia; the middle section depicts the ship journey.

Near the top, you can see the adaptation of her style, moving into Australian flora and fauna away from the European motifs. She uses colour subtly but beautifully. The carving records her story but is also a beautiful artistic piece.

Schubert became a carver after learning the craft from her husband. In 1996, the Immigration Museum commissioned the piece, called My Life; the collection also holds some of her tools and the cuttings from the wood form of her works in progress.

Her migration experience was at the heart of her identity, as was her creative practice.