You are here: Home » Articles filed under: 'News' » Article: 'The “Dundee Effect”? How a new museum'

The “Dundee Effect”? How a new museum

May 3rd, 2019 | Browse other: News. | Tagged with: how a new museum transformed a Scottish town, Three cities now vying to be Scotland’s cultural capital | 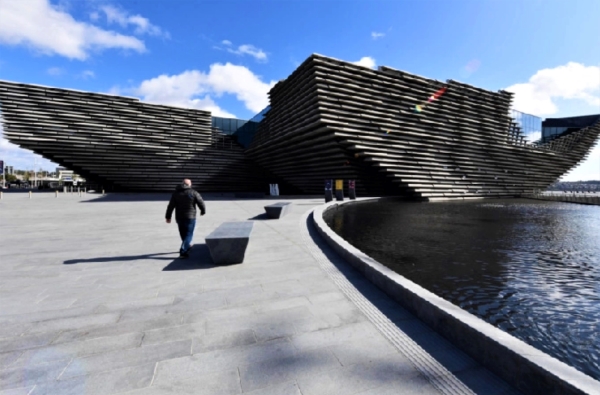 Dundee, Edinburgh and Glasgow could all make a bid to become Scotland’s leading city of culture, writes Brian Ferguson.

It seems a long time since news emerged that Dundee was in talks with the Victoria and Albert design museum in London to create the city’s own V&A attraction overlooking the River Tay. It is actually 12 years this month since Dundee University’s first announcement. The project would never have got off the ground without a huge amount of vision and drive from the taskforce behind the initial business case and brief for the museum. When the city launched an international design contest three years later it was adamant it wanted a “world-class building” on the site.

The cavalcade of headlines made around the world since the appointment of Japanese architect Kengo Kuma in 2010 would suggest it has lived up to those expectations. It has also captured the imagination of the public, with more than half a million visitors – the forecast for its first full year – notched up within six months.

But could anyone in Dundee have imagined how the V&A project would have helped transform perceptions of the city? It has been hard to keep pace with the plaudits and accolades that have been heaped on Dundee in the last couple of years and, somewhat remarkably, there is no sign of them slowing down.

Lonely Planet, Bloomberg, the Wall Street Journal and National Geographic have all placed Dundee on must-visit lists. The last few days alone have seen the Sunday Times name Dundee as the best place to live in Scotland and Conde Nast Traveler name it as one of Britain’s top 10 places for a city break. Glasgow and Edinburgh were notable by their absence. Cynics there may point to a “V&A” effect largely propelling Dundee to become what is now described by Conde Nast Traveler as “Scotland’s renaissance city”.

But most of its glowing reports have rightly acknowledged the thriving and constantly evolving cultural sector that Dundee has long boasted, with the city perhaps unfairly overlooked in favour of Glasgow and Edinburgh, and their mega-events.

What the rise of Dundee has highlighted, however, is a degree of complacency that, in different ways, has afflicted Edinburgh and Glasgow.

It was telling to read the views of Sir Ewan Brown, the man leading the project Edinburgh’s first concert hall in 100 years, over the city’s failure to ensure its cultural infrastructure has kept pace with the city’s tourism industry – or the modern-day demands of audiences and performers. While the £45 million New Town venue is likely to get the go-ahead next week, it has been opposed by the developers of the St James hotel, retail and leisure complex, and the Gleneagles resort, although their neighbouring projects are a long way from completion. Bigger challenges lie ahead in trying to replace the largely obsolete Ross Bandstand – despite ambitions from promoters for it to be established as “Scotland’s Hollywood Bowl” – due to a vociferous lobby against the staging of commercial events there. Glasgow has not been shy in promoting itself as Scotland’s leading cultural destination since the run-up to the 2014 Commonwealth Games, but that has rung a bit hollow since the closure of The Arches, the two fires that have struck Glasgow School of Art and the threat of demolition over the blaze-hit O2 ABC.

It was notable that Dundee was one of the alternatives suggested by festival organiser Geoff Ellis when he threatened to pull the plug on TRNSMT and the Summer Sessions over a planned “ticket tax”.

No-one in Dundee, Edinburgh or Glasgow would be happy to admit it publicly, but there is an inescapable sense that the crown of Scotland’s culture capital is there for the taking.