You are here: Home » Articles filed under: 'News' » Article: 'The end of Neighbours, Australian culture &'

The end of Neighbours, Australian culture &

May 5th, 2022 | Browse other: News. | Tagged with: Jason Donovan and Kylie Minogue, There would be no Jason and Kylie without Scott and Charlene |

Thomas Mitchell, There would be no Jason and Kylie without Scott and Charlene, The Age, 2 May 2022

The last time Kylie Minogue as Charlene Robinson set foot in Pin Oak Court, the famous Vermont South cul-de-sac that doubles as Neighbours’ fictional Ramsay Street, it was 1988, and the world was a vastly different place.

John Howard was toiling away in opposition, yet to become our second-longest-serving prime minister. The world’s first website was three years away, so there was no tweeting, Instagramming or pretending to know what the acronym NFT stands for. Neighbours was one of the most popular shows on Australian television. 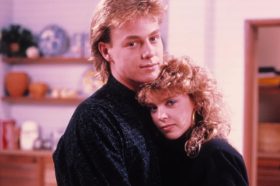 Much of that popularity came down to Minogue, who, alongside Jason Donovan, formed the show’s most enduring couple, Scott and Charlene Robinson. She was the rough-around-the-edges mechanic, he was the handsome boy next door, and together they captured the nation’s fascination.

It didn’t hurt that the onscreen couple had a real-life love affair which helped generate tremendous interest in both the show and their characters. The pinnacle of Scott-and-Charlene-mania arrived in 1987 when the pair tied the knot in a lavish ceremony. 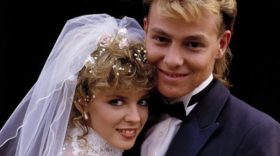 Kylie Minogue and Jason Donovan, who famously played Charlene and Scott in Neighbours, will be returning to the soap in the show’s season finale. 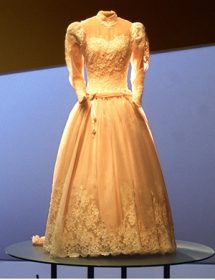 The wedding dress worn by Minogue in the 1987 episode of Neighbours is now on permanent display at the Tasmanian Museum & Art Gallery.

Two million Australians (one in eight of us) tuned in to watch the episode, and when it aired in Britain in November, it attracted an audience of 19.6 million.

The wedding remains the stuff of TV legend, launching both the show and the actors into a new stratosphere of celebrity. To this day, the wedding dress worn by Minogue is on display at the Tasmanian Museum & Art Gallery. So if you ever find yourself in Hobart with absolutely nothing to do, that’s always an option.

The Scott and Charlene storyline represented a cultural high point for the show. When Fremantle Media confirmed the cancellation of Neighbours in March, speculation quickly turned to whether Kylie and Jason might return for the finale.

On Sunday, we got our answer, Donovan and Minogue breaking the internet (OK, fine, maybe just bruising it) by announcing, via Instagram, that they would be reprising their roles for the finale. But while there is natural excitement about seeing Scott and Charlene reunited on screen, fans should be wary about how the show will manage their comeback.

Neighbours fans have been through so much in the period since Minogue and Donovan hot-footed it out of Erinsborough. There have been tornadoes, twisters, that time Toadie (Ryan Moloney) killed Dee (Madeleine West) on their wedding day only for her to return years later, multiple electrical fires, Bouncer The Dog’s acid-trip dreams, and now, the sad reality that Ramsay Street will soon be a ghost town.

The last thing they need to see is two of their most beloved characters phoning it in for a celebrity-style cameo. If Kylie and Jason are going to come back as Charlene and Scott, then they need to fully commit to the roles. We must not detect that one has won a Grammy and sold millions of albums and the other maintains a career on stage and screen in the UK. 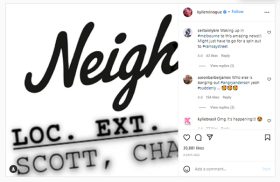 We want to see Our Kylie in Charlene’s greased-up overalls, rocking her painfully tight perm and speaking with a clipped Australian accent. These days Minogue sounds more like the Queen than Charlene, but if this is going to work, then she must rediscover her inner bogan.

Same goes for Jason; no dyed blonde mullet, no Scott.

The return of Scott and Charlene will see a lot of former Neighbours viewers tuning back in, probably for the first time in a long time, and leaning into that nostalgia is a no-brainer.

Treat Scott and Charlene as a couple who have existed in a time capsule, thawed out and sent hooning back to Ramsay Street in Charlene’s Mini, as Angry Anderson’s Suddenly blasts through the cassette player. For the return of the couple who defined suburban Australia in the ’80s, the producers owe us that. 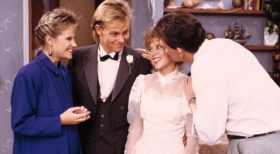 If Kylie and Jason are going to come back as Charlene and Scott, then they need to fully commit to the roles.