You are here: Home » Articles filed under: 'News' » Article: 'The enduring influence of Ikat fabric'

The enduring influence of Ikat fabric

May 24th, 2018 | Browse other: News. | Tagged with: Enduring Influence of Ikat Fabric, To Dye For: Ikats From Central Asia | 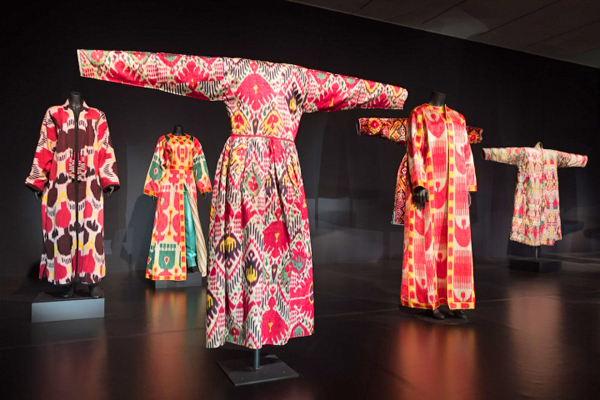 Ikat patterns have become enormously popular in both fashion and interior design. But most consumers seem to be ignorant of the textile’s cultural origins.

WASHINGTON, DC — In 1997, Oscar de la Renta designed a spring/summer haute couture collection for Pierre Balmain’s fashion house that included flowing robes with bold, colorful geometric patterns. They were inspired by the traditional silk ikats of what is now Uzbekistan, which had their heyday in the 19th century but only became widely known to Western collectors after the collapse of the Soviet Union in 1991. The Dominican-born designer was so taken with the textiles that he visited Uzbekistan and commissioned local weavers to produce fabrics for the French label.

De la Renta went on to incorporate or reference ikats in at least several other collections for both Balmain and his eponymous fashion label, up until de la Renta’s death in 2014. In doing so, he is credited with launching a trend: Ikat patterns have become enormously popular in both fashion and interior design, with brands ranging from Anthropologie to Target featuring them on everything from women’s clothing to armchairs. But most consumers seem to be ignorant of the textile’s cultural origins.

To Dye For: Ikats From Central Asia, currently on view at the Smithsonian’s Arthur M. Sackler Gallery, juxtaposes a half-dozen of de la Renta’s original ikat-inspired pieces spanning from 1997 to 2013 (on loan from his estate) with about 30 historical Central Asian ikats, examining how these textiles in a sense crossed over.

The term ikat, which comes from a Malay-Indonesian word meaning “to tie,” refers to both the technique and the fabrics and patterns it produces. Ikats are made through a labor-intensive series of steps that involves resist-dyeing (a process that controls the spread of the dye) bundles of vertical, or warp, threads, thus creating the design through the dyeing process rather than in the weaving, unlike most other fabrics.

In 19th-century Central Asia, ikat production involved a complex network of artisans who worked mainly along ethnic lines: Tajiks did the yellow and red dyeing, Jews handled the indigo dyeing, and Uzbeks conceived the patterns and did the weaving. Although the method was developed in several parts of the world, Uzbekistan’s stunning silk ikats have become the best known.

“Nobody really knows why [ikat] suddenly appeared in Central Asia and Bukhara and Samarkand in the early 19th century,” Massumeh Farhad, the Sackler’s chief curator, told Hyperallergic. “And when it appeared, it was so sophisticated that you’d think there must have been precedents, but we just don’t know.”

The historical ikats in To Dye For were all donated to the Sackler by Guido Goldman — a Swiss-born academic who founded the Center for European Studies at Harvard University — who began acquiring them in the 1970s, eventually amassing one of the world’s most significant collections. The works on display include a couple dozen flat tapestries, as well as coats and robes that would have once been worn by both men and women as symbols of wealth and status in the oasis cities of Bukhara and Samarkand.

The exhibit doesn’t take a critical stance on de la Renta’s incorporation of ikat in his designs, or address questions about the Western fashion world’s appropriation of other cultures. Its aim is more straightforward: to inform visitors about the textile’s origins in Central Asia and to illuminate that cultural and historical context.