You are here: Home » Articles filed under: 'News' » Article: 'The ‘Fearless Girl’ statue turns one today' 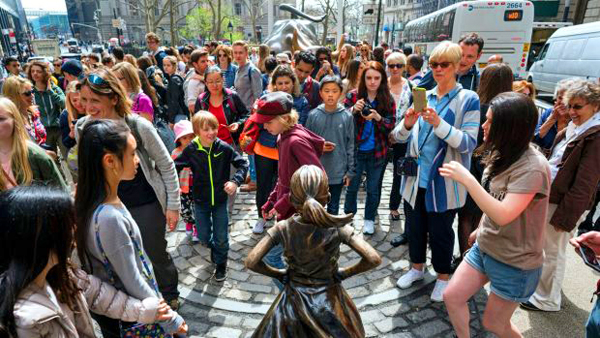 The statue has become a tourist attraction in New York. Photo: AP.

When the Fearless Girl statue turns one this week, she’ll have inspired more than legions of selfies with tourists and controversies over a corporation’s role in public art. The investment firm behind her says that since it placed the defiant bronze little girl in New York’s financial district under the cover of night last year, it has pushed more than 150 companies to add women to their previously all-male boards.

State Street Global Advisers, the investment firm behind the Fearless Girl statue, is expected to announce Wednesday that of the 787 all-male boards in the United States, Britain and Australia that it identified and then pressured to add women, 152 did so. Another 34 said they plan to in the near term.

At 511 of the companies that did not add a woman, meanwhile, the firm voted against that board’s chair of the nominating committee, which selects new members. It plans to expand its campaign to Japan, Canada and Europe this year and push companies, particularly those in Europe where there are quotas on the number of women at the board level, to disclose their numbers of women in executive management jobs, too.

“Only when they’re aware of what the numbers are can they think about longer term goals,” said Lynn Blake, an executive vice president at State Street, noting that data on managers below the very highest ranks is usually hard for investors to get.

While the research showing the financial impact of diverse boards is interesting, she said, “the research we find even more compelling is research that goes down to senior management levels,” and shows that more women can make an even greater impact on long-term financial results.

The announcement comes as other large asset-management firms have been more vocal about taking an active stance on social issues or governance reforms at the companies where they invest. In January, BlackRock CEO Laurence Fink, which manages nearly $US6.3 trillion ($8.1 trillion) in investments, put CEOs on alert that they would be expected to answer questions such as how they plan to use savings from the tax reform law and whether they are creating a diverse workforce. State Street manages $US1.8 trillion in equity assets, Blake said, nearly all of which is passively managed in vehicles such as index funds, which hold stocks that cannot be sold if investors are unhappy with management’s strategy or the diversity of a company’s board.

The firm is not shying away from its campaign despite plenty of controversial headlines since the statue’s launch – including having to pay $US5 million in fines over its own gender pay practices and criticism that the bronze girl facing down the “Charging Bull” statue is “corporate feminism” and even “everything that’s wrong with our society,” in the words of one critic. (The statue only has a permit for its current spot on Broadway through March 8, but will soon find a new home in New York. A query to the mayor’s press office was not immediately returned.)

In October, State Street was the subject of social media posts noting the irony or hypocrisy of a company that was trumpeting women’s empowerment only to be called in for charges of pay bias. The US Department of Labor alleged that in 2010 and 2011 it discriminated against 305 of its top female employees by paying them less than male peers, as well as against 15 of its black executives who were paid less than white peers. The firm settled the claims, which were first generated by an audit of federal contractors.