You are here: Home » Articles filed under: 'News' » Article: 'The future viability of platypus populations'

The future viability of platypus populations

November 24th, 2022 | Browse other: News. | Tagged with: The future viability of platypus populations | 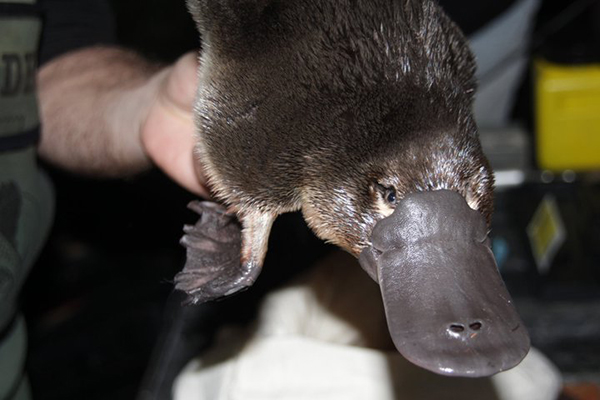 “Platypus monitoring” by Melbourne Water is licensed under CC BY-NC-ND 2.0.

Fragmentation by major dams and implications for the future viability of platypus populations, Communications Biology, November 2022

The evolutionarily unique platypus (Ornithorhynchus anatinus) has experienced major declines and extinctions from a range of historical and recent interacting human-mediated threats. Although spending most of their time in the water, platypuses can move over land. Nevertheless, uncertainties remain whether dams are barriers to movement, thus limiting gene flow and dispersal, essential to evolution and ecology. Here we examined disruption of gene flow between platypus groups below and above five major dams, matched to four adjacent rivers without major dams. Genetic differentiation (FST) across dams was 4- to 20-fold higher than along similar stretches of adjacent undammed rivers; FST across dams was similar to differentiation between adjacent river systems. This indicates that major dams represent major barriers for platypus movements. Furthermore, FST between groups was correlated with the year in which the dam was built, increasing by 0.011 every generation, reflecting the effects of these barriers on platypus genetics. This study provides evidence of gene flow restriction, which jeopardises the long-term viability of platypus populations when groups are fragmented by major dams. Mitigation strategies, such as building of by-pass structures and translocation between upstream and downstream of the dam, should be considered in conservation and management planning.

The semi-aquatic platypus (Ornithorhynchus anatinus), along with echidnas, belong to the order Monotremata, the most species-poor (n = 5) and most basal branch of mammals, which diverged from marsupials and eutherians 187 Mya1. Platypuses have a unique combination of features, including oviparity, venomous spurs in males, electroreception used to locate freshwater macroinvertebrates, biofluorescent pelage, and multiple sex chromosomes (five pairs instead of one2,3,4). The uniqueness and rarity of platypus features (sensu Pavoine et al.5) and its evolutionary distinctiveness6 make it arguably one of the most irreplaceable mammals existing today.

The platypus is currently listed as ‘Near Threatened’ by the International Union for Conservation of Nature (IUCN7), ‘Endangered’ in South Australia (National Parks and Wildlife Act 1972) and ‘Vulnerable’ in Victoria8.

There is increasing evidence of larger numbers of platypuses in historical times9 and ongoing declines and extinctions of local populations 2,10,11. Declines have been driven by multiple and synergistic threats, including river regulation, loss and modification of habitats, climate change, pollution, by-catch mortality and predation by invasive species2,9,10,11. Continued declines due to current and future climate change are predicted as a result of increased frequency and severity of droughts 2,12,13, as well as elevated temperature conditions which could lead to the loss of more than 30% of suitable habitat by 2070 12,14.

Threats to freshwater ecosystems are commonly synergistic and are intensified by the construction of major dams that can have immediate and long-term impacts 15. Nearly half of the world’s river discharge is impacted by flow regulation and fragmentation 16. Dams pose a major threat to global freshwater biodiversity 17. Large dams form major barriers for aquatic organisms, limiting critical ecological processes, such as fish migration 18. Water impoundments behind major dams form wind-exposed, deep, and standing (lentic) ecosystems which can offer little resources for flow-dependant species19. In Australia, dams are one of the more serious threats for platypus conservation, given their potential broad impact on habitat2,12,20. Major dams are widespread across much of the platypus’ distribution, where as many as 77% (383 out of 495) of the Australian major dams (wall height >10 m; ancold.org.au) coincide within the regions where platypuses occur (Fig. 1a; see also Bino et al.11). Immediate adverse effects of major dams extend over large areas both upstream and downstream. Below major dams, altered natural flow regimes, including changing of the timing of flows and important reduction in flow volumes have been found to significantly impact platypus abundances and demographics21. Conditions below and above major dams represent poor foraging and burrowing habitat for platypuses, given lower productivity of macroinvertebrate prey species 10,22,23,24,25.