You are here: Home » Articles filed under: 'News' » Article: 'The history wars are over'

The history wars are over

‘The history wars are over, now its time to get politics back in our museum’

In an election year we need to remember that, in recent years in Australia, history has been the subject of fierce party politics, and we should spare a thought for our museum sector.

In 1996, at the Sir Robert Menzies lecture, then prime minister John Howard famously condemned a “black arm band” view of history. When the National Museum of Australia opened in 2001, Howard denounced, as part of an array of gripes, the postmodern architecture of the museum and what he deemed the “privileging” of the narratives of First Australians. He then stacked the Museum Council with his mates who shared his ideological views.

The result is a scar that runs deep. When Andrew Sayers was appointed director of the National Museum in 2010, he wisely declared the museum should not be defined by its history, but has that difficult beginning been resolved?

Former ACT Labor Chief Minister Jon Stanhope, currently the Administrator of Christmas Island and Cocos (Keeling) Islands, suggested the National Museum of Australia collect objects relating to asylum seekers. Such a collection would represent a difficult narrative with profound implications for human rights, hardly a “balance sheet” of “heroic achievement” by those in power, as John Howard suggested in the Menzies lecture.

Is Stanhope’s initiative, then, a sign that the history wars are over?

Kevin Rudd certainly called a truce in 2009 at the launch of Australians by Thomas Keneally, by announcing his support for “debates about the complexities of the good, the bad, the ugly”. And Kevin Rudd did more than declare an end to the war. He put his money where his mouth was.

In November of the same year, as part of the National Apology to the Forgotten Australians and Former Child Migrants, Kevin Rudd announced his government would fund an exhibition at the National Museum of Australia in order to “provide future generations with a solemn reminder of the past”.

Subsequently Inside: Life in Children’s Homes and Institutions, an exhibition I helped curate, opened at the National Museum two years later.

Kevin Rudd’s initiative in funding an exhibition about Forgotten Australians wasn’t backed by power politics. The former prime minister was responding to the findings of a Senate Committee, published in its report Forgotten Australians, a committee comprised of representatives from six, separate political parties. Stanhope, too, is supporting a view of social history that includes difficult narratives, not a singular ideology.

So as long as government ministers support an inclusive agenda, then cultural institutions should not shy away from dialogue with government ministers. After all, a museum cannot source the complexities of its national narratives solely, from the work of historians.

Historians, justifiably, only pursue their own lines of scholarly interest. Government-funded museums, on the other hand, have a moral obligation to be of public benefit. Museums must tell the truth, all of it, even those difficult and uncomfortable truths. The experiences of the marginalised and those suffering from trauma are less likely to be reflected in the objects-for-sale in the catalogues of prestigious auction houses or commercial galleries. So museums need to look to a broad range of sectors, disciplines and advocacy groups in order to fulfil an inclusive agenda.

Cultural institutions should never be used as vehicles for party politics but there is no reason why those politicians who openly and actively engage with their constituents cannot be perceived, by museums, as an additional and positive source of insight, into the experiences and narratives of Australians.

Robert Manne has argued the history wars will not be over until Australians cease to flinch at the uncomfortable truths of their nation’s past.

Perhaps the advocacy like Stanhope’s for the inclusion of narratives of trauma within the work of the National Museum of Australia shows that the Museum can now confidently attend to telling stories in a cultural climate characterised by accord and goodwill.

No matter who wins the September election, is fair that Australians expect its museum sector to take heart and more importantly show courage to tell the truth, the whole truth, and nothing but.

Visit the original article on The Conversation to see public comments. 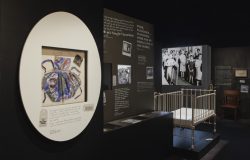 Image from Inside: Life in Children's Homes and Institutions exhibition, National Museum of Australia. Picture: National Museum of Australia
Positions Vacant » View All
» Team Leader, First Peoples Art & Culture – TMAG
» Booking Services & Rostering Officer – SLM
Latest News » View All
Egyptians petition for BM to return
the Rosetta Stone Read more.
BM pledges ‘not to dismantle’ Parthenon
sculptures amid reports of talks with Greece Read more.
NHM to install life-size Titanosaur
cast The world’s largest dinosaur to fit (- just) Read more.
Gallerie d’Italia’s Art & Finance exhibition
- a long & mutually beneficial history Read more.
TMAG’s ‘Lost’ last Tasmanian tiger remains
found! ... cataloguing collections matters Read more.
Top +
Council of Australasian Museum Directors c/o Mr Brian Oldman, South Australian Museum PO Box 234 Adelaide, South Australia 5001 Australia, © CAMD 2022
Copyright: All information and resources provided on this website remain the copyright of the Council of Australasian Museum Directors. Permission is granted for viewing and downloading for personal and not for profit purposes. Those wishing to reproduce any materials for commercial, educational or other uses are requested to contact us.
Disclaimer: The content of this website is provided for information purposes only and is not intended as a substitute for professional advice. No claim is made as to the accuracy or authenticity of the content of the website. The Council of Australasian Museum Directors does not accept any liability to any person for the information or advice (or the use of such information or advice) which is provided on this website. The information on our website is provided on the basis that all persons accessing the site undertake responsibility for assessing the relevance and accuracy of its content. No responsibility is taken for any information or services which may appear on any linked web sites. Hostgator.
.