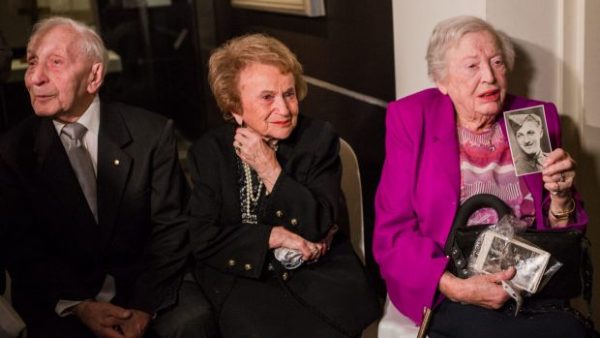 Out of the 250 children from her Jewish school in Dresden Irma Hanner was one of just six who survived the Holocaust.

She was eight when someone told her what Gestapo meant, nine when they took her mother to Ravensbrück women’s concentration camp and 12 when they came for her.

At Theresienstadt concentration camp in Czechoslovakia she was surrounded by 40,000 people, but said she never felt more alone.

“I lost my childhood, my youth, and my family,” she said.

The resilient 86-year-old, who migrated to Australia in 1949, shared her brave story at the launch of the Australian War Memorial‘s new permanent Holocaust display.

She said her children and five grandchildren jokingly call her “the bionic woman”.

In the camps, she suffered tonsilitis and a make-shift surgery by a fellow prisoner to remove her tonsils, encephalitis and four years of cruelty and barbaric killing perpetrated by the Nazis.

But rather than fortitude, she said it was “only luck” that allowed her to survive.

The Holocaust revealed humanity’s capacity for evil but Australian survivors warn that the generations living in its shadow must foster respect and be vigilant about countering hatred.

The Australian War Memorial‘s The Holocaust: witnesses and survivors exhibition tells the horrifying story of the genocide through the eyes of some of the 30,000 survivors who made their post-war lives in Australia.

The collection includes video testimony, survivor’s belongings, identity cards, faded Stars of David and confronting images taken by late Australian war artist Alan Moore of the conditions in the Bergen-Belsen camp when it was liberated.

“If they can remember that they can think of how to contribute by undertaking small acts of kindness rather than thinking of the negative side.”

Australian War Memorial director Dr Brendan Nelson said while there had been controversy surrounding the project he felt it was the museum’s responsibility to remind Australians the Holocaust was possible because of a “majority indifference to the plight of a minority.”

He said the museum’s role as the custodian of the nation’s soul was to remind us of the values we uphold in a world confronted by the treatment of refugees, persecution of people and the modern resurgence of totalitarianism.

“The Holocaust and its impacts are an Australian story,” he said. “Between 20,000 and 35,000 survivors of the genocide made new homes in Australia.

“It has everything to do with us as Australians, not only because we did have direct interactions with the Holocaust but also because we are a part of humankind.”