You are here: Home » Articles filed under: 'News' » Article: 'The Honourable Joan Kirner'

Museum Victoria mourns Joan Kirner, the former Premier of Victoria, who served as a member of the museum’s governing body from 2003 to 2012. 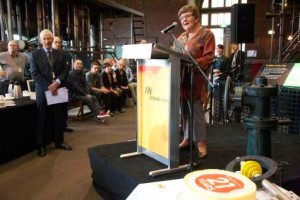 Joan Kirner speaking at the celebration of the 21st birthday of Scienceworks. Source: Museum Victoria.

Joan’s first involvement with the museum occurred during her time as Premier of Victoria when she opened Scienceworks, an investment in the scientific life of the State that proved very forward-thinking.

Joan was an enthusiastic supporter of Museum Victoria. Just last week she was talking about ways in which she might help with one of the museum’s current projects that is providing visibility to the role of women on farms in Australia. Her enthusiasm for efforts to recognise and encourage women in all aspects of public and personal life extended to many other aspects of social justice, including the rights of Aboriginal Australians. She was a member of the museum’s Aboriginal Cultural Heritage Advisory Committee, and the development of the First Peoples exhibition in Bunjilaka was dear to her heart.

Joan’s passions extended to wildlife, and particularly birds. She and Ron, her husband, went on camping trips that would bring them to places rich in birdlife until ill-health curtailed that activity. She was a great advocate for opportunities for the museum to display its rich collections of natural science specimens, culminating in the opening of the award-winning Wild: Amazing animals in a changing world at Melbourne Museum. As someone who placed the education of young people high on any agenda, the museum’s ability to reach and inspire hundreds of thousands of children was a source of considerable pleasure. Joan was also on the Immigration Museum Advisory Committee and was a strong advocate for youth engagement which resulted in the Talking Difference project.

I enjoyed working with Joan Kirner enormously during her nine years (the maximum term) as a Board member. Her enthusiasm was matched by her keen intellect: she was a constant source of wisdom. When she stepped down from the Board, Joan was appointed an Honorary Life Fellow of Museum Victoria and she continued to take a close interest in its progress. Her insights into the politics and personalities of Victoria were always valuable and frequently amusing. She was held in high regard by everyone associated with Museum Victoria and we will miss her greatly.