You are here: Home » Articles filed under: 'News' » Article: 'The Lost Museum' 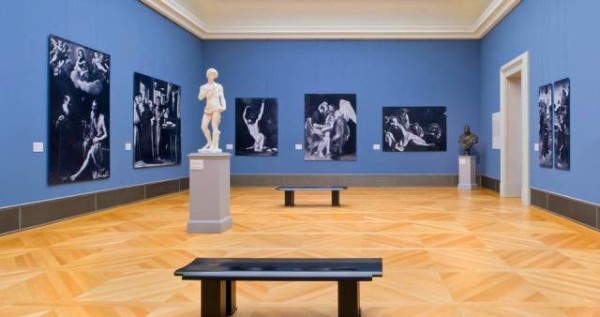 Like much of Berlin itself, the city’s museums have been subject to the periodic physical and administrative shake-ups that continue to make visits both exciting and a tad puzzling. The Bode Museum (once called the Kaiser-Friedrich-Museum), primarily devoted to European sculpture, is currently the venue for a challenging exhibition, “The Lost Museum: The Berlin Sculpture and Paintings Collections 70 Years After World War II.” It is a rare look at museum PTSD, revealing more about the history and physical condition of art than we’re accustomed to seeing in museums. Some may consider this particular focus a distraction from the continuing unresolved issues surrounding art plundered by the Nazis. There’s also the risk of commemorative displays feeling self-congratulatory, thereby dwarfing the actual events being remembered.

That might have been the case here as well; the exhibition’s focus is on the fate of the 400 works lost by the painting and sculpture collections once housed in this building. Given all we know about the millions of lives lost and the amount of property destroyed thanks to the actions of a regime headquartered in Berlin, such numbers of artworks might seem infinitesimal, and beside the point. This could have been a self-pitying display. Instead, it’s a candid exposition of museum issues regarding art loss, recovery and reconstitution, described in the dual-language (German/English) wall texts as “a polyphonic reflection: curators, conservators, archivists, historians, moulders and artists . . . offer a variety of perspectives and even contradictions.” The exhibition can also be understood in the context of the recent trend in museums to encourage multiple voices and perspectives. The visitor may enter with a fixed view of how to think about seven decades following the war’s end, but the museum asserts that “this legacy [of missing art] has meant something different for each generation. Every approach reflects the prevailing political zeitgeist and thus the decision to favor one version of the past over another.”

An Indiana Jones adventure-turned-art-exhibition (with no fully intact works on view), this show tracks the fate of Berlin’s prewar art treasures—many of which were stored in a bunker in Friedrichshain (a district of Berlin near the center), where two unexplained fires took place in May 1945, around the time of the war’s end, destroying or seriously damaging most of the art there. Among the casualties were sculptural masterpieces by Laurana, Pollaiuolo and Donatello, as well as paintings by Petrus Christus, Caravaggio and Van Dyck.Other works had been stored in Thuringia (central Germany) and were liberated by the U.S. Army in 1945 and subsequently restituted to the (West) Berlin museums. A far greater number (perhaps 2.5 million objects) were taken by the Red Army to the Soviet Union in 1945-46; of these, about 1.5 million works were returned to East Germany during the years 1955-58. The works that now remain in Russia form the focus of a German-Russian Museum Dialogue group—also discussed here—that continues to wrestle with ownership and war restitution issues on both sides.