You are here: Home » Articles filed under: 'News' » Article: 'The Met’s current challenges'

George Goldner, who led the museum’s department of prints and drawings for two decades, says it needs to reassess its priorities 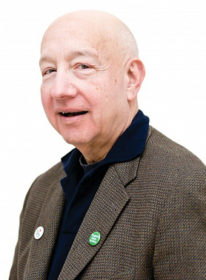 George Goldner, who led the Metropolitan Museum of Art’s department of prints and drawings for 21 years, spoke to us about how the museum has changed, and offered his candid opinions on its current challenges. We spoke with him earlier this month, several weeks before the Met’s director, Thomas Campbell, announced his resignation on 28 February. During his tenure, Goldner made 8,200 acquisitions, by artists from Leonardo da Vinci to Hans Christian Andersen. He retired in 2015 and served as a consultant to the Met until January. The interview appears in our March print edition.

The Art Newspaper: You started at the Met in 1993. What were the defining characteristics of the institution then?
George Goldner: It was a very traditional institution, which focused mainly on exhibitions, acquisitions, scholarship and the galleries. It had a clear identity and a manageable agenda.

How has the museum changed in recent years?
I think Tom Campbell has pursued three distinct agendas. First, he wanted to maintain the best things of Philippe’s administration [de Montebello, the Met’s director between 1977 and 2008]: scholarship, acquisitions—traditional work that people like me believe a museum is all about. Second, Tom strongly believes in an egalitarian vision. This has sometimes pulled the museum away from scholarship, despite his wish to do otherwise, and toward an emphasis on things like the website, branding, public programming. However, much to his credit, before his time, the Met had a whiff of snobbery about it, which Tom has rightly erased. The third part is the dramatic thrust into contemporary art, which came from a group of trustees, who unsurprisingly collect it. Each agenda costs a lot of money, and the latter two are somewhat contradictory of the first.

Is that how the Met got into its difficult financial position?
Part of the problem is that too much was done simultaneously, and too quickly. Even though the Met is a wealthy institution, this led to certain things being done less well and to a financial crunch. Nevertheless, it still remains difficult to understand how an institution with a large endowment, excellent attendance and large revenue could have so suddenly found itself in a crippling financial position.

Is it surprising that there wasn’t more oversight?
Tom was hired as someone who had a great record as a curator, but I don’t think anybody imagined him as a financial expert. I used to be the curators’ representative to the trustee finance committee for a few years when Philippe was director. It meets five to six times a year and is made up of accomplished businessmen, who somehow failed to prevent this apparent crisis.