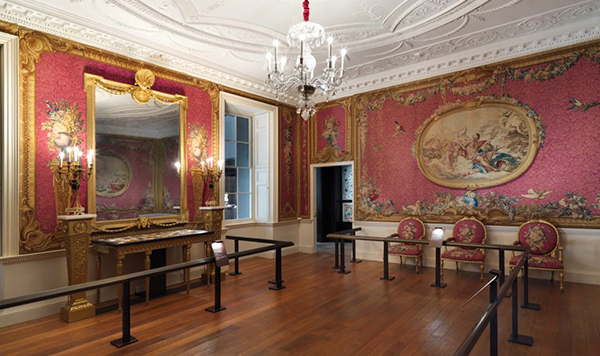 Installation view of of the Croome Court Tapestry Room in the Met’s new British Galleries. Photo by Joseph Coscia, February 2020. Courtesy of the Metropolitan Museum of Art.

Tess Thackara, The Met’s Newly Reopened British Galleries Tell a Much More Honest Story About Wealth, Class, and Empire—and Their Dark Side, 26 February 2020

A renovation costing roughly $22 million has transformed the museum’s journey through the British decorative arts. 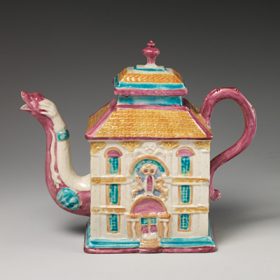 The newly revamped British galleries at  open to the public on March 2 as part of the institution’s 150-year anniversary program.

There, you’ll find a wealth of eye-opening juxtapositions. Rococo tea caddies bearing romanticized colonial scenes are on view alongside an anti-slavery medallion; fine silverware from aristocratic homes hovers over lowly earthenware jugs from Tudor households. And throughout, British humor and eccentricity are on frequent display: Don Quixote battles a set of windmills in a cartoonish 17th-century textile, and a 19th-century jar takes the form of a goofy, grinning bird.

The renovation of these galleries, some seven years in the making and with a price tag of around $22 million, enlivens the United States’ most comprehensive collection of British decorative arts and design (there are also paintings and sculpture peppered throughout). This facelift is intended to inject some life into a relatively dry presentation and show a far more nuanced representation of material cultural traditions that relied heavily on empire-building and wealth amassed from slave labor.

Formerly, the galleries focused heavily on the tastes of the British upper classes—and failed to draw much foot traffic, Met curator Wolf Burchard told Artnet News. Recreated interiors from luxury country homes formed the backdrop to its collection of textiles, ornaments, and artworks.

In an effort to make these objects relevant to a contemporary audience, the museum has sought to expand its perspective, emphasizing the development and growth of the British Empire—with all of its systems of exploitation, as well as its cultural appropriations and cross-pollinations.

There’s also a fresh emphasis on the traditions of the working and middle classes, and significant additions to the museum’s 19th-century holdings. More than a quarter of the objects on view are new acquisitions.

“The previous galleries were of their time,” said Burchard. “They were pretty interiors designed to showcase the most wonderful objects that we have in our collection.” The core of the collection was donated to the museum in the mid-to-late-20th century, when British decorative arts were immensely popular and fetched high prices at auction—and when art history was considerably less attuned to the broader political and social context of museum displays.

“For all the beauty of these objects, the British empire was the backbone of the British economy and the funds made available to produce these things is in part due to the empire and the slave trade—and you have to acknowledge that,” Burchard explained.

That said, there are still plenty of luxury accoutrements and lavish interiors to ogle. The 10-room display, which begins in the 16th century and winds up in the 19th, includes a restored 17th-century staircase from stately Cashbury Park, which visitors can ascend to a mezzanine. At some point in its history in the Met’s collection, the staircase got chopped up and stored in pieces. Its various parts have now been located and returned, more or less, to their original magnificence. 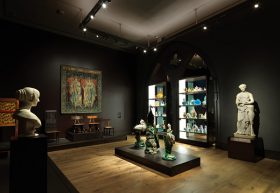 Installation view of the 19th Century Gallery in the Met’s new British Galleries. Photo by Joseph Coscia, February 2020. Courtesy of the Metropolitan Museum of Art.

Elsewhere, there is an extraordinary bed from Hampton Court Castle—a great pompous mass of wood and blue silk damask drapery— made by Huguenot upholsterers after they left France, where they’d been persecuted by King Louis XIV. (The bed appeared in the previous gallery display as part of an interior, but here gets its own spotlight in order to emphasize its sculptural character, said Burchard.)

A handful of comprehensive interiors do remain in the refurbished galleries—like an 18th-century room from Croome Court, with walls covered in lush, full-bleed tapestries made at the historic Gobelins textile workshop in Paris. But the interiors of these spaces have largely been emptied of objects so that viewers will “appreciate them as architectural masterpieces in their own right,” said Burchard. .

All this opulence is balanced with displays that give new dimension and color to the various layers of British society and its transgressions overseas. A highlight is the Trade & Empire section, which features a vast figurative chintz showing a battle between the English and French in Southeast India. Nearby, a towering display of teapots—nodding to Britain’s best-loved import and legacy of its forays East—runs the gamut from high to low, from a deluxe Chelsea porcelain vessel with ornate gilding (“the Ferrari of teapots,” according to Burchard) to an earthenware teapot in the form of a cauliflower.

It is in this section that an anti-slavery medallion made by the Wedgwood pottery workshop, showing a man in shackles, appears alongside a set of Paul de Lamerie silver tea caddies showing exotic scenes of abundance overseas. The objects, placed in a corner cabinet, could easily go unnoticed—but, like other subtle details in the display, they leave you with the sense of a narrative that is as richly complex and vibrant as it is morally abhorrent.

Throughout, the museum is eager to provide context and address any potential 21st-century sensitivities. An ivory candelabra, for example, is accompanied by a wall text that warns of the troubling ethics of the ivory trade. “We are obviously not in any way endorsing its use,” said Burchard of the material. “We think it’s important that when you put objects on display like this that you take the responsibility of showing that they were of their time.”

The galleries paint a picture of a country reaching out far beyond its borders and enjoying the benefits of global trade—as seen in the many Chinoiserie porcelain objects, an Egyptomania bench and candelabra, and ample evidence of the numerous, rich cultural interactions between Britain and the Continent represented here. As such it offers a stark contrast with a country that today is turning inward, gripped by Brexit.

The showcase is, above all, a celebration of the innovation and entrepreneurship of artisans and craftspeople in Britain over four centuries—like the feverishly inventive, diverse shapes and patterns created by the 19th-century homeware designer Christopher Dresser, who incorporated styles from Japan and other parts of the world into his wares.

While Dresser is well-known, however, many of the craftsmen represented here are not. Craftspeople, of course, have long enjoyed considerably less prestige than painters and sculptors. “These galleries are really dedicated to the unsung heroes of the decorative arts,” said Burchard, “the majority of whom will remain anonymous for eternity because we just don’t know who made these objects.”