You are here: Home » Articles filed under: 'News' » Article: 'The Met’s “responsibility to speak out”'

The Met’s “responsibility to speak out” 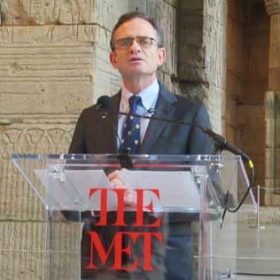 Throwing caution to the winds, the Metropolitan Museum today went beyond the more measured words of a few other museums in its angry call to “bring to justice those responsible” for the “criminal actions” at the Capitol on Jan. 6.

The Met’s official Statement on Capitol Desecration, signed by Daniel Weiss, president and CEO, and Max Hollein, director, began with this no-holds-barred barrage:

The attack on the United States Capitol was an act of domestic terrorism that violated our nation’s highest values. The actions of these treasonous rioters underscore the threat to democracy in a society where misinformation, racism, and other hateful ideologies are allowed to run rampant. [Emphasis added.]

The “domestic terrorism” label has been borne out by today’s Washington Post article reporting that “dozens of people on a terrorist watch list were in Washington for pro-Trump events Jan. 6, a day that ended in a chaotic crime rampage when a violent mob stormed the U.S. Capitol, according to people familiar with evidence gathered in the FBI’s investigation.”

In what seemed to be an attempt to anticipate and deflect criticism for skirting restrictions imposed on political activity by 501(c)(3) nonprofits, the Met offered this self-justification in its official statement:

The Metropolitan Museum of Art has a responsibility to speak out on…these areas. The Capitol building and its treasured art collection were subject to acts of shameful vandalism and desecration, including the spraying of a blood-like substance on statues and the general destruction of art and objects throughout the building.

[Reports that I’ve seen mentioned a “blood-like substance” on only one sculpture—a bust of Zachary Taylor—and suggested that the damage to art (as distinguished from furniture) in the building was relatively light—“pepper spray accretions and residue from tear gas and fire extinguishers—that will require cleaning and conservation,” in the words of the Architect of the Capitol.]

Most disturbing, racist and antisemitic imagery was paraded throughout the complex, including a noose and numerous Confederate flags along with insignia of various other hate groups. These symbols of hate, amid the halls of one of the nation’s most cherished and democratic landmarks, were a violent affront to our ideals of freedom and equality.

The statement ended with an offer of “whatever assistance would be helpful” in addressing damage to the Capitol’s art and objects, while noting that “early reports indicate that the damage to the building and the objects within can be repaired by the dedicated professional staff at the Capitol who are charged with its care.”

As you may remember, some museums, including the Museum of Modern Art and the Getty, previously took a quasi-political stand in response to (soon-to-be-ex-) President Trump‘s 2017 Executive Order Protecting the Nation from Foreign Terrorist Entry into the United States—the so-called “travel ban.” MoMA made its point in its permanent-collection galleries, by inserting works by artists from nations subject to the travel ban: 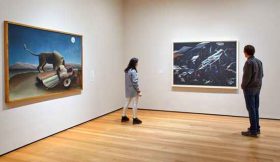 Speaking of bans, you can examine on the website of the U.S. Capitol Police the long list of “items [that are] prohibited from being brought into the buildings and grounds” of the Capitol—restrictions that were clearly honored in the breach on Jan. 6. There continues to be grave concern about future attacks on state capitols, the U.S. Capitol or even the White House.

If museums in Washington weren’t already closed (due to the pandemic), they might well need to lock up now to guard against possible pandemonium, as the time for President-Elect Biden‘s eagerly (and apprehensively) anticipated inauguration approaches.