You are here: Home » Articles filed under: 'News' » Article: 'The Mollusc Man' 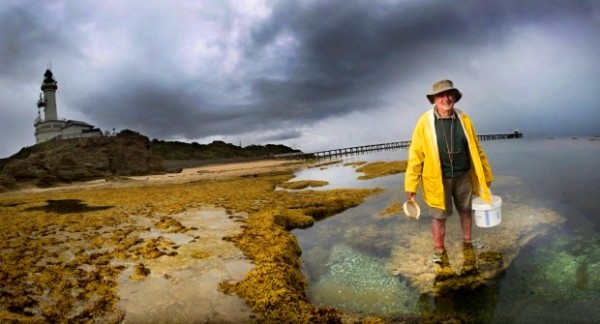 If you think tiny marine molluscs are a bit of a yawn, then you haven’t encountered Robert Burn.

While the soft-bodied sea creatures known as nudibranchs may sit at the bottom of the food chain, according to Mr Burn, they are very clever.

For a start these striking “butterflies of the sea” are hermaphroditic – meaning they have male and female reproductive organs.

They also have eyes without lenses. And their external gills inspired their name: nudus meaning naked and brankhia meaning lungs.

“They are captivating, I find them quite fascinating,” he said.

Just shy of 79, Mr Burn has identified almost 100 species of the marine creature which are completely new to science.

But he’s no scientist. By training Mr Burn is a builder. His family have been builders in Geelong more than a century. It’s just that over the years – without intending to – Mr Burn has become a world expert in the marine molluscs that call the waters around Port Phillip Bay, Western Port Bay and Bass Strait home.

“It’s a hobby,” Mr Burn said. “But over the years it has become an obsessive hobby.”

An honorary associate at Museum Victoria, he has co-authored around 100 papers in scientific journals over the past 60 years and contributed chapters to books on marine life. But Mr Burn’s latest book, a nudibranch field guide released in February by Museum Victoria and CSIRO Publishing, is his first as a sole author.