You are here: Home » Articles filed under: 'News' » Article: 'The more the museum “supports” dissent'

The more the museum “supports” dissent

October 3rd, 2019 | Browse other: News. | Tagged with: museums and ethical choice, The rich fund museums to launder their reputations | 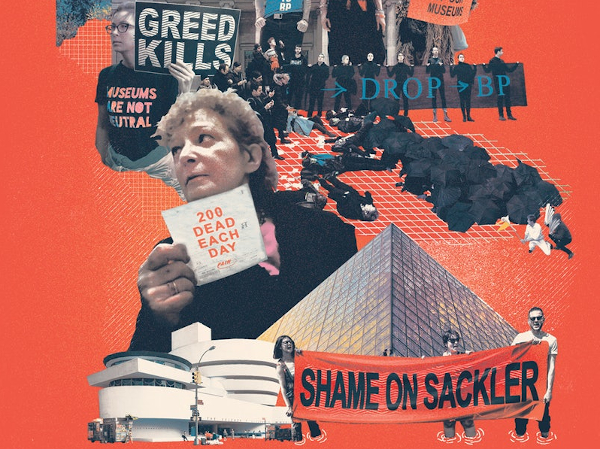 The rich fund museums to launder their reputations. Museums exploit identity politics to distract from the shady money funding them. In the art world, it’s all just business as usual.

In four minutes on Season 3, The Sopranos nails the ethical dilemma that has long mired the art world. Carmela Soprano’s consultation with the Jewish shrink is priceless: Facing the truth about Tony, her mob-boss spouse, the upscale Mafia housewife tries to compartmentalize her marriage from its funding sources. She is loath to divorce. “Us Catholics, we place a great deal of stock in the sanctity of the family,” she explains. He bluntly advises her to leave: “You’ll never be able to quell the feelings of guilt and shame as long as you’re his accomplice.” “All I do is make sure he has dinner on his table,” Carmela insists. “So ‘enabler’ would be a more accurate job description,” the therapist schools her. “I’m not charging you, because I won’t take blood money, and you can’t either. One thing you can’t say is that you haven’t been told.”

Like pious Carmela in her haute bourgeois drag, art museums are married to the mob. They want to be seen as temples to the creative spirit untouched by the ruthless machinations of capital, a blameless zone of public service, but a quick scan of their patrons reveals the truth. Asserting their sanctity, museums gentrify a rogue’s gallery of funders: banksters and hedge fund managers, fossil fuel oligarchs, private-prison and opioid profiteers. They demonstrate little compunction about art-washing predators whose business models are as antisocial as Tony’s. From the robber barons of yore—Frick, Carnegie, Rockefeller, etc.—to today’s one percent, it is a hallowed tradition for apex greedheads to seek the halo of philanthropy by supporting the arts. Museum boards are crowded with the worst of the moneyed elite, permitting them to launder their reputations for plunder and pelf as they impress their rivals with lavish tax-deductible donations, reap prestige, and celebrate themselves with galas. Their philanthropy is socialism for the rich, an expression of everything wrong in our grotesquely unequal republic—“freedom’s land,” as Gore Vidal would say, “bravery’s home.”

Museum development departments market art-world cachet as tax-deductible corporate PR. It’s their de facto business model to custom-craft “collaborations” for sponsors as a strategy to defuse public concerns and deflect criticism. As a festering symptom of our culture’s capture by corporate interests, until very recently, this symbiotic relationship has caused not outrage but resignation, even abject appreciation—until, that is, the flurry of scandals that brought the whole devil’s bargain into public view. On both sides of the Atlantic, artists and activists have agitated effectively enough to oust a few choice specimens of the dirty-handed rich, among them tear gas magnate Warren Kanders, who resigned as vice chairman of the board of the Whitney in July, after eight artists pulled out of the Biennial in protest.

These events mark a significant disruption of the status quo. Art professionals (i.e., curators and staff) who wanted to advance (nay, survive) have historically had to be courtiers to the rich, willing to self-censor any gauche tendencies that might rub their patrons the wrong way. Such complicity with sponsors has been baked into the system since the 1970s, when NEA cuts threw arts organizations to the tender mercies of the marketplace. The tax break, according to the National Endowment for the Arts, has become “the most significant form of arts support” in the United States, where charitable donations to the arts far outstrip governmental financing. 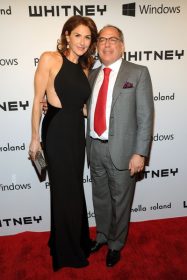 The contradiction between the lofty stated values of the museum and the predatory exploits of its patrons would be great fodder for satire if it were not so deeply disturbing. Consider the Museum of Modern Art’s expansion, coming this October. “The museum didn’t emphasize female artists, didn’t emphasize what minority artists were doing, and it was limited on geography. Where those were always the exceptions, now they really should be part of the reality of the multicultural society we all live in,” said MoMA chairman and vulture capitalist Leon Black, whose former family charity director was prominent creep Jeffrey Epstein. Also creepy: Black’s fellow board member Larry Fink, who is the CEO of BlackRock, the second-largest investor in private prisons, which serve their for-profit goals at the expense of incarcerated populations, overwhelmingly people of color. The appalling Carmelaesque hypocrisy of these institutions, masking their dependency on dirty money with flamboyant shows of identity sensitivity, shocks nobody because it is simply business as usual. The new wing boasts a $50 million gift from trustee Steven Cohen, whose trusty Point72 hedge fund was created after his former firm, SAC Capital, pleaded guilty to fraud. I’ll go out on a limb here and predict that the wing will be hailed as progress.

Last spring, Decolonize This Place (DTP), a collective of two dozen activist groups working against colonialism and gentrification, targeted Kanders, who has supported museums as a “safe place for unsafe ideas” while profiting from the violent repression of immigrants, dissidents, and other hapless losers of neoliberal empire. Kanders’s Safariland “defense products,” as they are euphemistically called, have been used against protesters at Standing Rock and Ferguson and migrants at the Mexican border. The activists’ open letter to the Whitney mounted a powerful critique of the museum’s complicity with historic and present injustice. “We know this goes beyond Kanders,” the signatories wrote. “He is a stand-in for an entire system.” For months, despite weekly demonstrations, Kanders refused to step down.

But in July, his reluctant hand was forced by a piece in Artforum co-written by Hannah Black, Ciarán Finlayson, and Tobi Haslett, who argued that artists were being “instrumentalized to cleanse Kanders’s reputation,” and called for participants in the Whitney Biennial to withdraw before the show closed in September. Kanders, they wrote, may be no worse than others on boards around the country, and capitalist accumulation depends on the “exploitation, misery, and boredom of people all over the world,” but these facts make it more, not less, important to act when there is a chance to do so. Eight artists, including standout star Nicole Eisenman, responded to the call by pulling out.

CODE PINK and Art Space Sanctuary, which disrupted MoMA’s annual David Rockefeller awards to protest MoMA board member Larry Fink and honoree Brian Moynihan, of Bank of America, made a similar point of targeting the system, not the individual. The protesters demanded that the museum, and Fink, “divest from private prisons in the U.S.” “The goal of the campaign,” they explained to Hyperallergic, was “not for Fink to resign from MoMA’s board but instead to call attention to museum practices in the U.S. that are complicit with oligarchical structures.”

Meanwhile in the U.K. protests against ecocidal art patron BP have been heating up. The activist group BP or Not BP? has staged massive protests at the British Museum, where the gas company’s contract runs through 2022, and has twitted the upcoming BP-sponsored blockbuster Troy: Myth and Reality as a “Trojan Horse for BP.” English actor and director Mark Rylance recently resigned from the Royal Shakespeare Company, refusing to be a stooge for BP, whose toxic sponsorship, he eloquently argued, is inconsistent with the RSC’s stated values. Egyptian novelist Ahdaf Soueif stepped down from the British Museum’s board of trustees in July, troubled by BP’s sponsorship, the corporation’s lack of engagement regarding the repatriation of artworks, and the museum’s treatment of its own contract workers. As she wrote in the London Review of Books: “The world is caught up in battles over climate change, vicious and widening inequality, the residual heritage of colonialism, questions of democracy, citizenship and human rights. On all these issues the museum needs to take a clear ethical position.”

Before Kanders resigned, he went as far as to applaud the protesters’ “bravery” and praise the institution where for so long he was safe from accountability. “I am not the problem,” he replied to a collective “boo!” signed by 100 Whitney staffers back in November 2018. Whitney director Adam Weinberg stood with Kanders for months, announcing he welcomed the demonstrators’ “dissent,” even as he reasserted the museum’s mythic autonomy. “The Whitney cannot right all the ills of an unjust world,” Weinberg unnecessarily reminded us. For a long time the Whitney was perfectly happy to welcome the DTP protesters as a badge of its enlightenment and open-mindedness, while Kanders brazenly profited from practices that directly contradicted the museum’s claim to respect diversity. With a few small gestures, the spectacle of dissent was safely absorbed into the Whitney brand borg. This is how The New York Times describes art museums’ preferred stance: “They want to stay above the fray.” Carmela Soprano would doubtless nod sagely in agreement.