You are here: Home » Articles filed under: 'News' » Article: 'The night parrot: a mystery as old'

The night parrot: a mystery as old 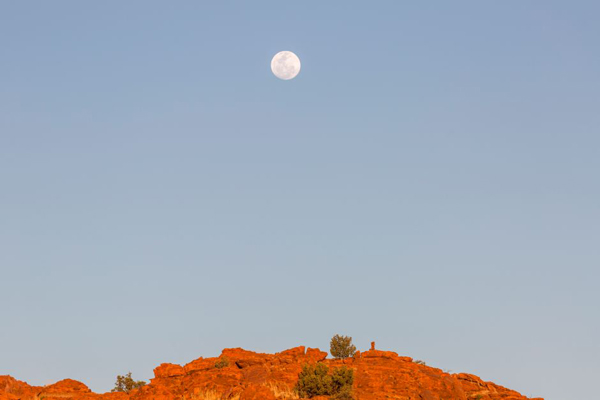 Anne Jones, The night parrot: A mystery as old as our country, ABC News, 10 February 2019

In the middle of the Little Sandy Desert, an old man sits with a strong cup of tea and a story to tell.

He’s one of very few people in the world who has seen a night parrot alive — he flushed one burning a patch of spinifex. 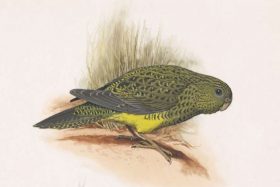 A 1971 painting of a night parrot by William Cooper. (Supplied: National Library of Australia)

But this story is much older. He is telling the night parrot Dreaming story.

Two ancestral beings, he says, were gathering the animals together and naming them.

“You gotta go right back to that Dreamtime — they wanted to get him, have a look at him, name him, so he could be among the rest of the birds,” elder and traditional owner Rita Cutter translates from Manyjilyjarra.

“But this little bird seen them and just disappeared, never to be mentioned or looked at.” A hand movement off into the bushes.

“And they really wanted to get a hold him.

“They woulda had a little talk together — and that two beings, they woulda put him in amongst all the rest of the birds.

“‘You can join in, mix in, have fun and do whatever you want, as long as you’re with your families, in the right surroundings,'” Ms Cutter translates, slipping into the voice of those elder beings.

“But as soon as he seen them two — he just disappeared. They looked, looked, lifted [the grasses] and nothing.

“They tried to get him out of that big jumpy [spinifex].

“Flooding it, hail stones, caused all that big rain to come to try to get him out.

The parrot remained aloof from the family of birds, mysterious and unseen.

Even in the Dreaming, the night parrot was a loner, and the ancestors of humans were chasing him.

Colonial collectors and a death in a waterhole

The night parrot has been described as Australia’s most elusive bird.

It lives on the ground amid inhospitable spinifex in some of our harshest climates and is largely nocturnal. This, combined with the species’ low numbers, makes them extremely difficult to find.

The European scientific “discovery” of the night parrot was haphazard and connected with favoured colonial activities of the time: collecting things and finding new resources to exploit.

A specimen was taken in South Australia by Charles Sturt’s expedition in 1845, and after travelling around the world to England, through the hands of John Gould to a benefactor’s collection, it was misidentified and ultimately went unnoticed.

Twenty years later, a specimen from Western Australia caught the eye of Gould and he named it the Western Ground-Parakeet in 1861.

Around the country it had many different common names: the Australian owl parrot, the porcupine parrot, the midnight cuckoo and solitaire, each of these giving a tantalising hint at local knowledge of the bird’s habits.

In the Victorian era, it was fashionable to collect animal materials. Sometimes live animals, and other times the bits of animals: eggs, furs, feathers or skeletons.

“Fairly soon after Gould gave it a name, it became a desirable,” says Penny Olsen from the Australian National University.

Andrews showed a ruthless tenacity for collecting, not just parrots, but all birds, mammals and even fish.

The specimens that he collected — mostly shot — now sit in museums and private collections around the world.

Andrews was the most prolific of all night parrot collectors.

“We think something like 28 specimens that are now in museums were collected by him, and there is only 30-odd, all told,” Dr Olsen says.

“He seemed like an interesting character, quite solitary and rather too fond of the drink.”

Andrews was found in 1884 floating face down in a waterhole near a place poetically named Dismal Gully.

The most successful pursuer of night parrots had come to an end.

“It was all fairly mysterious, just like the bird itself,” says Dr Olsen.

After Andrews in the 1870s, hardly anybody else found night parrots.