You are here: Home » Articles filed under: 'News' » Article: 'The pandemic may have killed the blockbuster'

The pandemic may have killed the blockbuster

August 12th, 2021 | Browse other: News. | Tagged with: France’s divisive health pass, the future of the RMN-Grand Palais, The Pandemic May Have Killed the Blockbuster Exhibition |

We spoke to the president of RMN-Grand Palais about his vision for the future of the Paris institution.

Before taking off for his summer vacation, Chris Dercon, president of the Réunion des musées nationaux Grand Palais (RMN-Grand Palais), invited Artnet News to his ninth-floor office overlooking the Seine near Bastille in Paris.

Born in Belgium in 1958, Dercon became president of the institution, which oversees 16 museums and the Grand Palais, in 2019. His international career has spanned being director of the Volksbühne in Berlin, London’s Tate Modern, Haus der Kunst in Munich, and Museum Boijmans Van Beuningen in Rotterdam. Prior to that, he was director of programming at the Witte de With Center for Contemporary Art in Rotterdam (now called Kunstinstituut Melly) and artistic director of MoMA-PS1 in New York.

During a wide-ranging conversation, Dercon explained why he has invited the German artist Anselm Kiefer to show at the Grand Palais Éphémère, or Ephemeral Grand Palais—the temporary structure near the Eiffel Towel that will host Grand Palais programming while the original undergoes renovation. He also shared his thoughts on lessons learned during the Covid-19 pandemic, France’s divisive health pass, and his plans for the reopening of the Grand Palais in 2025. 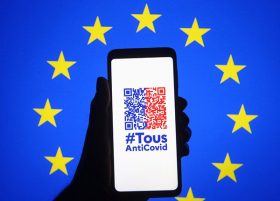 The TousAntiCovid app is seen on a smartphone with the EU flag in the background. The app’s COVID-19 health pass, showing PCR tests, antigen tests, and vaccination certificates, is becoming mandatory for entrance to venues that host more than 50 people, including museums. Photo by Pavlo Gonchar/SOPA Images/LightRocket via Getty Images.

The TousAntiCovid app is seen on a smartphone with the EU flag in the background. The app’s COVID-19 health pass, showing PCR tests, antigen tests, and vaccination certificates, is becoming mandatory for entrance to venues that host more than 50 people, including museums. Photo by Pavlo Gonchar/SOPA Images/LightRocket via Getty Images.

What have you learnt during the pandemic?

In recent years, I’ve been publishing a lot on the future of museums and have been part of discussions on how to make shows, exhibition displays and museum architecture differently. Suddenly, during the pandemic, these questions were raised again much more urgently.

Finally, people are taking these things seriously, like the cost of blockbusters, and trying to invent new formats, and we’re seeing a lot of young curators from Kunsthalles and biennials becoming senior museum curators. I’m thrilled to see that there are many things that we considered taboo, such as how a museum can do more for a local community instead of catering to economic models for tourists, that even big museums like the Louvre will have to take seriously, which [the Louvre’s president] Laurence des Cars has said.

We probably cannot afford to ship works back and forth and will have to think of other ways to do necessary shows with fewer works. When I was director of the Museum Boijmans van Beuningen, all year long we’d have requests for Magritte’s because [museums] wanted to sell tickets. Did they contribute anything to the research on Magritte? I wonder. Some did, of course. The cultural industry is part of our museums’ business but one should ask why do we do such-and-such a show, and do we need all these paintings? Can we tell a story with less?

At biennales, it will be a challenge to make exhibitions where people watch cinema together in one black box and then go to another black box. We’ll have to start thinking about displays, recycling materials, and coming up with more economical models of showing works of art.

What are your thoughts on the requirement of the French health pass to enter museums?

I have a responsibility toward the public and staff, and think that the pass sanitaire is a very good thing. I repeat what Emmanuel Macron said: if you don’t want to be vaccinated, you are taking my liberty. You are not “free,” you’re just a fucking arsehole—he didn’t say “fucking arsehole,” I’m saying that.

But I’m not defending what some colleagues are talking about—the idea of selling first-class, premium and business class [museum] tickets [on the basis that] if you want to be alone, you have to pay more. 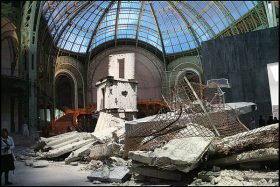 At first, I was keen to introduce the work of a woman artist as the first exhibition at the Grand Palais Éphémère. I was thinking consciously of how the Monumenta series regrettably only had one woman, Emilia Kabakov. But because of the pandemic, that exhibition has been stalled until next summer when we will give over the Grand Palais Éphémère to a woman artist known for her precise architectural interventions through the medium of painting. The Réunion des Musées Nationaux-Grand Palais was never in charge of the selection of artists for Monumenta, the project had been initiated by the ministry of culture, way before my arrival.

The adventure with Kiefer came about after his visit to the building and fits nicely into a continuation of the first Monumenta. It has enabled us to revisit Monumenta’s history and unearth information that was widely unknown. For instance, it was actually Christian Boltanski, who recently left us, who had proposed Kiefer’s name for the first Monumenta. Boltanski was invited to do Monumenta in 2007 but [his wife] Annette Messager was going to have a show that year at the Centre Pompidou. Boltanski said that he couldn’t do it the same year as Annette and would do it later. In presenting Kiefer’s exhibition now, we’re also able to showcase conversations between [Georg] Baselitz [who will have a retrospective at the Centre Pompidou this fall] and Kiefer.

What can you tell us about Kiefer’s intervention?

When Anselm Kiefer came to see the Grand Palais Éphémère, he said: “This feels just like my studio in Croissy-Beaubourg [in the Paris suburbs]. An atelier in the heart of Paris would be a nice thing to try.”

His studio is 60,000 square-meters while the Grand Palais Éphémère is 10,000 square-meters. Although unimpressed by its scale, he was struck by its bold elegance. He’s very interested in the definition of the artist’s studio, asking himself: When does a work have the capacity to be shown and when is a work worthy of being shown? That decision-making is the real magic of the artist deciding to give an artwork to the world. We decided against a classical show. Kiefer is taking on the Grand Palais Éphémère as an artist’s studio, “occupation” being a typical term for Kiefer. [Dercon shows renderings of Kiefer’s project that will see paintings displayed on moveable support structures from his studio, without any walls or petitions being installed.] 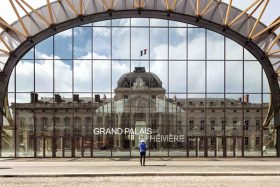 After curating an exhibition in June with augmented reality artworks, would you consider making a show about NFTs?

But a good joke also has good content, and at the moment I don’t see any interesting content in terms of NFTs, with the exception of artists working about NFTs like Simon Denny [in his project NFT Mine Offsets]. I can’t wait to see Hito Steyerl do something about NFTs and I have a weakness for the gesture of Damien Hirst with his NFT project, which is very smart. But I always need to take a critical distance to do things.

How different will the Grand Palais be after the renovations have been completed?

The Grand Palais has got smaller and smaller since the beginning, and when the Palais de la Découverte was created in 1937, it was almost cut in two. We’ve rediscovered a lot of space, which means we can do more. The building will be much more permeable and transparent for the public. The horizontal and vertical light will come back. People will be able to make use of the Grand Palais without having to buy a ticket for an exhibition, because we’ll create a huge public space for free in the middle where they can hang out.

What will the opening show be?

It will be “Dakar-Paris 1966,” named after the first show, “L’art nègre,” in the new galleries created by [former French culture minister] André Malraux and the architect Pierre Vivien at the Grand Palais in 1966.

We’re working with the Musée du Quai Branly to make a critical reconstruction. Primarily, it will be about the history of the reception of African art objects in Paris, the importance of the Dakar festival of 1966 and the creation of the concept of la négritude [Blackness] by Léopold Sédar Senghor. 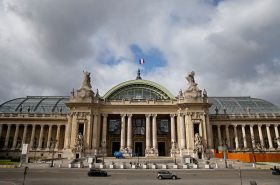 The Grand Palais is seen the day it is closed for renovation work on March 12, 2021 in Paris, France. Photo by Chesnot/Getty Images.

How would you define your strategy for the Grand Palais?

My strategy is to bring the revolutionary vision of Reynold Arnould [director of the national galleries of the Grand Palais from 1966 to 1980] back to life.

Arnould, who was also an artist, wanted to create a new space for culture where many different things could come together. We’re going to name a space after him so that people come across his vision again because nobody knows about him. I also think that there should be a room named after Irène Bizot, one of the big leading ladies of the galeries nationales [as former director of the RMN]. The Bizot Group, the most important group of [international] museum directors [founded in 1992] was named after her.

During the renovations, do you have plans to use the perimeter of the Grand Palais?

From September 16, there’ll be drawings on wood by Nayel Zeaite on the 800-metre-long palisade around the building site of the Grand Palais. He had an amazing exhibition at the Palais de Tokyo on the history of vandalism [in the group exhibition, “Futur, ancien, fugitif,” 2019-2020].

I like things which I don’t know yet; that’s when I get interested and call an artist. The idea was born immediately and he’s worked on it for over a year. He’s telling the story of the Grand Palais, such as the “Homage to Pablo Picasso” exhibition [in 1966] and “L’art nègre;” it will stay on the palisade for three years.