You are here: Home » Articles filed under: 'News' » Article: 'The railways own cricket champion'

The railways own cricket champion 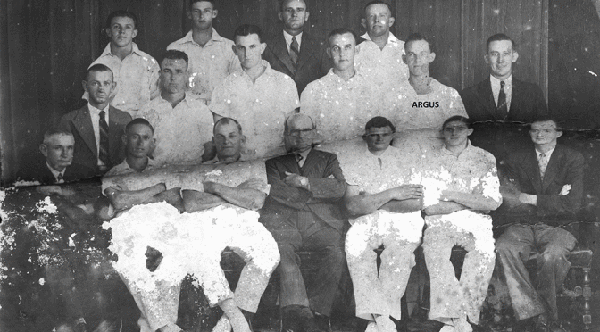 While working on a small collection of cricket trophies that had been donated to the Museum a few years ago, I began to research the man who had been awarded them. What I discovered was the remarkable story Ray Argus; a fast bowler and very handy slogger for the Ipswich Railways Cricket Club. The Second World War interrupted his remarkable career and he did not play again after deciding to retire in 1945 but for two and a half seasons Argus was unstoppable.

Raymond Robert Argus first came to the attention of the Ipswich cricket media in early 1937 playing for Kilcoy in the Upper Brisbane River Cricket Association competition. At the start of the new season in September 1938 it was announced that Railways had gained new players for the coming season from beyond the local district, including players from Victoria, Murgon and 26 year old Argus from Kilcoy. The 1938/39 Ipswich A Grade cricket competition was comprised of teams from Booval, Alberts, East Ipswich, Goodna, Past Grammars and Ipswich Railways.

Argus joined the Railway Department in March 1938, becoming a Temporary Coach Builder at the Ipswich Railway Workshops. In his debut for the Railways side, Argus bowled 3/19. With his first season starting well, the Queensland Times (QT) observed that he was a ‘fastish’ bowler and by November of that year, he was really starting to let the opposition have it.

His most clinical performance for the 1938/39 season came against Past Grammars when he bowled 4/8 in seven overs. This good form led to a representative call up, and Argus was chosen for a side made up of Ipswich A Grade players to take on a Queensland Cricket Association Warehouse Rep side from Brisbane in January 1939. The game was played at the Ipswich Showground with the Ipswich team defeating the Warehouse side. It was noted in the 31 January 1939 edition of the Queensland Times that ‘R Argus bowled splendidly to capture five wickets for 15 runs’.

Ray Argus had made quite an impression during his first A Grade season, but Railways still finished in fifth place – second-last on the table.  However, the 1939/40 season would see a remarkable turnaround in luck for the side.

For the 1939/40 season, Argus bowled a club record 67 wickets for the season. He had spells of 5/27 against Booval, 4/33 1st innings and 5/20 2nd innings against Past Grammars, 8/42 against Alberts and 7/32 against Goodna. Perhaps, even more, astonishing, though, he also scored one of the quickest centuries that the competition had ever seen.

After bowling an eight-wicket haul against Past Grammars, Argus came in down the order and belted a score of 112 in only 44 minutes. The QT described his batting as ‘cyclonic’. (In a game against East Ipswich in the 1938/39 season it took one of East’s batsmen 45 minutes to score 3 runs – no wonder Argus’ performance stood out in an era with such glacial scoring.) Argus’ abilities were a big factor in helping Railways to improve and the team played so well that they won the A Grade Premiership (the reserves side also won a premiership so Railways won ‘the double’ for the 1939/40 season).

The 1940/41 season was another successful outing for both Argus and his Railways side. The A Grade side became back-to-back premiers and Argus was awarded the P. Fallu Cup for the most wickets taken in a match.

Named after an Ipswich Solicitor who was a partner in the Dale & Fallu Law Firm. Argus was awarded the P. Fallu Cup after taking 14 wickets against Past Grammars in a single match (8/38 1st innings and 6/33 2nd innings).

The Railways cricket side of the late 1930s/early 1940s experienced tremendous success, but like the rest of the world at that time, the Second World War had become an all-consuming urgent endeavour.

The administration announced that the 1941/42 cricket competition would take place despite the war. Argus continued his excellent form and put on another batting masterclass, scoring 61 runs in only 32 minutes against East Ipswich. He scored 34 of those runs in the one over, hitting four 4s and two 6s.

Dwindling numbers due to enlistment necessitated a one-month break in the competition in mid-December 1941. Hopes that the season could be salvaged were dashed in late January 1942, when the competition was altogether abandoned due to the war, with many of the teams no longer able to field a full side.

Argus was a coach builder, which was a protected job, and he stayed in Ipswich during the war. Cricket returned to Ipswich in October 1945 for the 45/46 season, but it was noted in the QT that Railways would be without some of their pre-war stars, including Argus.

Frustratingly, I was unable to discover why Argus didn’t play again after 1945. He would only have been 33 years old when cricket resumed, but perhaps he decided to retire a legend, rather than risk his reputation. He remained dedicated to the Railway Cricket side and became a committee member and the club’s delegate to the Ipswich and West Moreton Cricket Association. He was awarded life membership of the Railways Cricket Club in 1954 after 17 years of service. He resigned from the Railway Department in 1959. 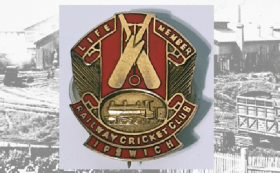