You are here: Home » Articles filed under: 'News' » Article: 'The secret life of QM'

The secret life of QM 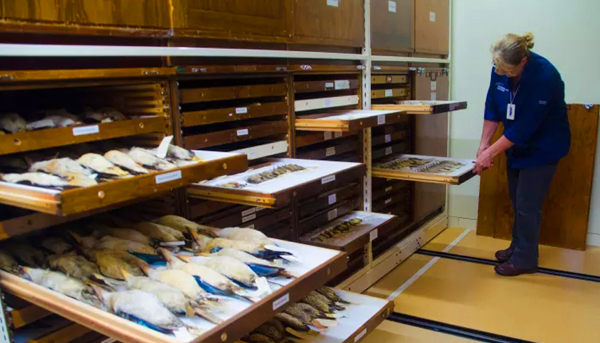 A glimpse into the private areas of the Queensland Museum, where animal specimens are stored. Photo: Supplied

While the levels downstairs bustle with crowds swarming to exhibits, a secret and quieter world exists upstairs at the Queensland Museum.

Behind the scenes at the museum in the heart of the Brisbane cultural precinct is a series of rooms filled with millions of animal specimens stored in towering compactus units.

The collection tells the story of Australia’s biodiversity, from a 15-metre humpback whale skeleton to the tiniest of ants.

And unlike a stamp collection, they don’t just collect one of every kind.

“Museum specimens are like a library, but instead of coming in to read the information you actually generate information by looking at the collection and piecing together a jigsaw of information,” Ms Janetzki said.

New Australian species of mammals, birds, fish, molluscs or insects are being discovered and added to the Queensland Museum collection every week.

The specimens are a treasure trove of information for scientists who come to the museum with the goal of answering life’s mysteries.

“Sometimes museums are the only source of that information, you can’t go into the wild and find genetic samples because many species are extinct,” Ms Janetzki said.

One researcher is attempting to identify the species responsible for lack of rainforest regeneration by comparing the bite marks on seeds collected locally to the teeth of mammals and the beaks of birds in the collection.

Other scientists have approached the museum for their data on cone snail locations, so its venom can be used to design new drug therapies.

Specimens are added to the museum library by researchers, collectors, and members of the public alike.

Dry specimens, such as mammals, are first quarantined and then preserved by removing elements that will decompose.

“We fill them with cotton wool and dacron, they’re like teddy bears,” Ms Janetzki.

Old specimens remain in good shape because they are stored in low temperatures, low humidity and low light.

“The musty smell in here is naphthalene used to keep insects away,” Ms Janetzki said.

“If we get an insect attack in here it will destroy large quantities of the collection.”

The Queensland Museum collection may never be complete.

Curator of molluscs Dr John Healy calls on the public to help fill the gaps.

“In many cases, we know what things are called, but we don’t know where to find them, how they act, or what their eggs look like.

“If you’re lucky enough to be on the reef or by a rockpool and see something interesting, take your phone and document it and contribute to science that way.”

If you have an enquiry about a species you want to be identified, the experts at Queensland Museum might just let you know you’ve discovered a new species for their ever-growing collection.

The 2018 World Science Festival is on in Brisbane, concluding on Sunday March 25.