You are here: Home » Articles filed under: 'News' » Article: 'The Shellal mosaic & AWM'

November 18th, 2022 | Browse other: News. | Tagged with: australian war memorial, Should a priceless mosaic inside the Australian War Memorial be returned to the Middle East? | 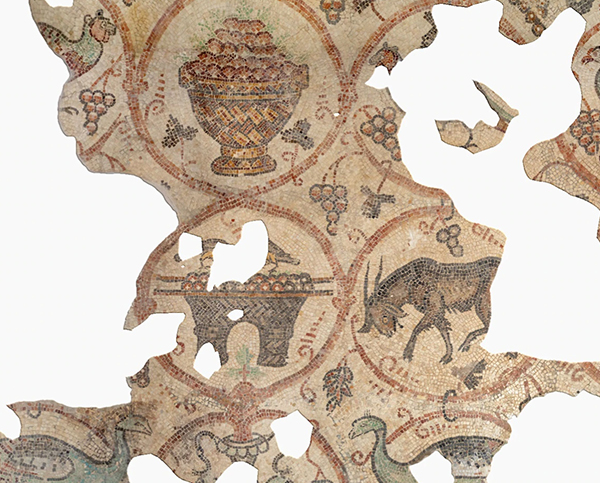 Should a priceless mosaic inside the Australian War Memorial be returned to the Middle East?

Tucked away inside the Australian War Memorial, beneath thousands of names of the fallen, among weapons and mementos from past conflicts, is a mosaic.

The Shellal Mosaic, made up of broken, faded pieces, depicting animals and winding grapevines, isn’t nearly as eye-catching or as grand as the war museum’s many other displays.

But this mosaic is one of the most controversial artworks in Australia.

It’s controversial because it was taken — some say looted — by Australian and New Zealand troops in the middle of a war zone, from land which today is among the most contested in the world.

To an Israeli archaeologist, this artwork is “stolen property”.

To a Palestinian mosaic expert, it’s a missing piece of cultural heritage.

And to an Australian war historian, it’s all a “very strange story”.

The story of the Shellal Mosaic begins almost 1,500 years ago.

In the mid-sixth century, the Byzantine Empire, which was an evolution of the Roman Empire to the east, ruled across the Mediterranean region.

Around this time, a Christian church was constructed in Byzantine-controlled Palestine, with an important feature: An opulent floor made up of half a million ‘tesserae’, or tiny, colourful tiles.

The Shellal Mosaic, as it’s called today, was born.

But as the centuries went on and the Byzantine Empire faded, the church fell to ruin, with the building and its once-opulent mosaic floor forgotten.

That is, until one of the bloodiest conflicts in human history.

In World War I, soldiers from Australia and New Zealand were sent to the Middle East to fight the Turkish Ottoman Empire, which had sided with the Germans.

Dr Emily Robertson, a war historian at the Australian National University, explains, “Essentially, Australia, as a dominion of the British Empire, was obliged to go to [this] war”.

During the Second Battle of Gaza in 1917, Australian and New Zealand soldiers found themselves on a hill near a Palestinian town called Shellal.

“They were digging trenches … [and] this mosaic pops up,” Dr Robertson says. 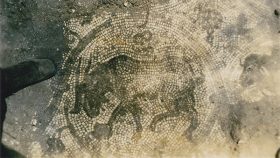 A section of the Shellal Mosaic after being found in 1917. Supplied: The State Library of Queensland.

It would have been a stunning find. According to a description of the mosaic from the Australian War Memorial, it was seen as “amongst the best mosaics of the sixth century”.

He would play a crucial role in the mosaic’s fate.

A chaplain and amateur archaeologist

“He was born in the UK. He was educated in Oxford, then he came to Australia. And he served as a chaplain with the Queensland mounted forces,” she says.

Rev Maitland Woods was also an amateur archaeologist, which Dr Robertson says “wasn’t as uncommon as you would think” at the time. 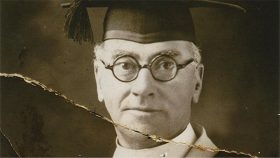 Reverend William Maitland Woods lobbied for the Shellal Mosaic to be brought to Australia. Supplied: The State Library of Queensland.

The Shellal Mosaic had been damaged in the fighting, so Rev Maitland Woods convinced his superiors that it needed to be “saved” and was given approval to dig it up.

So, under his watchful eye, around 30 Australian and New Zealand soldiers worked beneath the searing sun, and occasional enemy airplanes, to remove the mosaic from the ground.

“These men took so much pride, this was part of their ANZAC story, to have found the mosaic,” Dr Robertson says.

They used glue, canvas and plaster to keep the patterns in place, and then packed it into more than 60 crates.

These crates were sent to Cairo, where a British committee on war trophies would decide its fate.

That is when the real drama began.

As World War I ground on, there was talk about establishing an Australian war museum.

“[Soldiers were] told to collect things that were relevant to the war, to perhaps go into this future war museum … It became an obsession,” Dr Robertson says.

“The Australians were known as perhaps the most avid, and sometimes ghoulish, collectors.”