You are here: Home » Articles filed under: 'News' » Article: 'The State of Trust & Integrity in Research'

The State of Trust & Integrity in Research

Public trust in science can be boosted if major funding bodies adopt improved, standardized policies for data sharing and open access research, say the authors of a new report.

Ripeta – a Digital Science company dedicated to supporting and building trust in science – has today released its inaugural report: The State of Trust & Integrity in Research.

Containing contributions from a range of experienced authors – including from the National Institutes of Health (NIH), other external commentators and Ripeta itself – the report deals with issues of fostering public trust in science, and improving integrity in research through policies, data sharing, and open access practices.

It also includes a comparison of the policies and practices of five of the world’s major research funders.

Dr Leslie McIntosh, Founder and CEO of Ripeta, says: “In this rapidly changing world with trust in science having been shaken to its foundations, now more than ever it’s critical that we look at all aspects of how trust in science can be best supported and strengthened.

“There have been several high-profile cases in recent years in which seemingly legitimate studies have been found to include fabricated data, and this helps to illustrate what’s at stake: millions, or potentially billions of dollars in taxpayers’ money going to waste on studies that could have been diverted towards more worthy research, and a risk to public health, for example, from having illegitimate research shape clinical approaches.

Exclusive analysis by Ripeta in one section of the report compares the policies and practices of five major world funders: the Bill and Melinda Gates Foundation, the European Commission (EC), the National Institutes of Health (NIH) in the United States, the National Natural Science Foundation of China (NSFC), and the German Federal Ministry of Education and Research (BMBF).

The analysis shows that although each of the funders have their own policies in place to support data sharing, there are discrepancies between those policies and how they translate into practice.

For example, the number of research papers published in open access (OA) journals varied greatly depending on the funder. The NIH (95%) and the Bill & Melinda Gates Foundation (93%) far outstripped the representation of OA publications of other funders, especially the NSFC (33%). 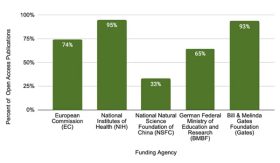 In addition to its detailed analysis of the five major funders, Ripeta found that with regard to 62 key funders worldwide:

See also: The State of Trust & Integrity in Research