You are here: Home » Articles filed under: 'News' » Article: 'The story behind Charlottesville'

The story behind Charlottesville 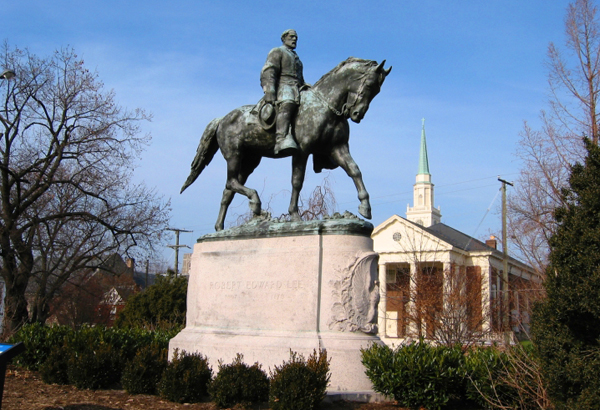 The statue whose planned removal spurred this weekend’s violent rallies was unveiled in 1924, when General Lee’s three-year-old great-granddaughter pulled a giant Confederate flag off of it.

The impetus for this weekend’s violent and deadly rallies of white supremacists and neo-Nazis in Charlottesville, Virginia, was a piece of public art. Specifically, an equestrian statue of Confederate general Robert E. Lee that is slated for removal. In February, Charlottesville’s city council voted to take down the statue, though in early May a judge issued a six-month injunction to stop its removal after a coalition of historians and Confederate supporters filed an appeal. For now, the 14-foot-tall bronze sculpture still sits atop its granite pedestal in Emancipation Park — whose renaming from Lee Park in June was not without incident, either — its fate as yet undecided.

The campaign to relocate Charlottesville’s Lee statue is part of a nationwide movement to critically examine and recontextualize public artworks that pay tribute to or otherwise elevate white supremacy, chief among them monuments to the Confederacy. New Orleans has removed four of its most prominent, with plans to display them in a setting that offers more historical context for the events and men they commemorate. In June, after much legalwrangling, St. Louis’s Confederate Monument was dismantled. Just yesterday, the mayor of Louisville, Kentucky, announced plans to review the city’s public art holdings to identify any works that might “be interpreted to be honoring bigotry, racism and/or slavery.”

Like many of the Confederate monuments dotting the South, Charlottesville’s statue of Lee was made in the North. It was designed by New York sculptor Henry Shrady — who is most famous, ironically, for co-designing the monument to Lee’s opponent in the Civil War, Ulysses S. Grant, at the US Capitol in Washington, DC — and, after his death in 1922, completed by the Italian-American artist Leo Lentelli.

According to nomination documents filed with the National Register of Historic Places in 1996 (the Lee monument was listed in 1997), the first artist approached to create the monument was Daniel Chester French, but because he was unavailable he recommended Shrady for the job. When Shrady died five years after taking on the commission (and just two weeks before his Grant Monument was inaugurated), Lentelli took on the project. However, by the time he gained access to the late sculptor’s studio, his clay model for the statue was badly damaged and cracked. It would be another two years before the monument was unveiled.

The Lee Monument was commissioned by Paul Goodloe McIntire, a businessman and philanthropist born in Charlottesville who financed several other prominent statues in the city, as well as supporting the University of Virginia — whose McIntire Department of Art is named after him, and to whose Fralin Museum of Art he donated hundreds of works. He also created Lee Park itself, buying the parcel of land it occupies in 1917 and clearing it to create a landscaped space for the planned monument. The statue of Lee atop his horse, Traveller, was cast by Brooklyn-based company Roman Bronze Works, while its pink granite pedestal (designed by Virginia architect Walter Dabney Blair) was fabricated in Washington, DC.