You are here: Home » Articles filed under: 'News' » Article: 'The value of Australia’s archives – NAA'

The value of Australia’s archives – NAA 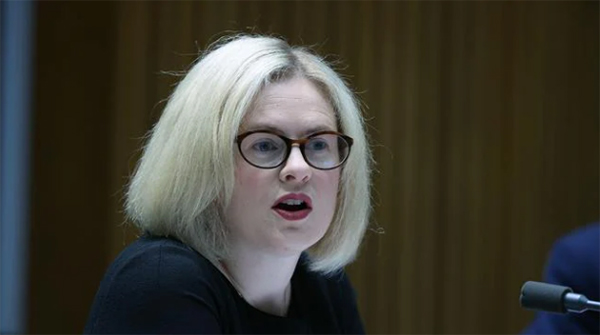 The provocation for the campaign was an appearance at Senate estimates by Assistant Attorney-General Amanda Stoker. Picture: NCA NewsWire/Gary Ramage.

The novelist and critic Alexis Wright, celebrated for her panoramic narratives of Indigenous life in the far north, recently had a remarkable encounter.

For years she had known of a Chinese great-grandfather who had arrived in the Territory late in the 19th century and married into the Waanyi people; then one day, miraculously digitised by the National Archives of Australia, she saw him.

A full-face photo, a side profile, a handprint, along with biographical information gleaned by a long-forgotten bureaucrat. It was, she says, “an enormously important gift to our family”.

And it’s one reason why Wright last week was among more than 150 signatories of an open letter drafted by Graeme Davison, emeritus professor of history at Monash University, calling for a better deal for the National Archives of Australia, which since 2015 has suffered an annual appropriation decrease of nearly $9m and shed approximately a fifth of its staff. The self-styled “memory of the nation” is at risk of subsiding into dementia.

The provocation for the campaign was an appearance at Senate estimates by Assistant Attorney-General Amanda Stoker on May 27.

“Time marches on,” Stoker said airily, deprecating reports of decaying records as “part of the ageing process”, studiously indifferent to projections that nearly all the NAA’s holdings of film and magnetic tape will be irretrievably damaged by 2025.

NAA was already a byword among historians for collapsing standards of service, swinging copying costs, atrocious delays, and worsening opaque secrecy, manifest in last year’s pointless and expensive fight to prevent the Palace Letters from becoming public. Now its minister was dismissing the loss of records from entirely avoidable lack of care as “business as usual”.

So Davison and I started seeking supporters. No luvvies. No Twitter windsocks. Only individuals with a substantial commitment to the written word, printed document, and institutional memory, and reflecting all shades of politics and belief.

They were joined by the last two directors-general of NAA (Ross Gibbs and George Nichols), the previous director-general of the National Library (Jan Fullerton) and a patron of Victoria’s Public Records Office who also happens to have been a Liberal premier (Ted Baillieu). Likewise compelled were a former NSW Chief Justice (Jim Spigelman), and two former justices of Victoria’s Supreme Court (Stephen Charles and David Harper).

Academic ranks were swelled by the Australian-born Regius Professors of History at Cambridge and Oxford (Sir Christopher Clark and Lyndal Roper); there are Australian educators at universities in Britain, Europe, the US, and China, plus official historians of the Vietnam War (Peter Edwards) and ASIO (David Horner).

Biographers of Alfred Deakin, Malcolm Fraser, and Sir John Gorton mingle on the list with biographers of Gough Whitlam, John Curtin and Paul Keating. Stan Grant and Henry Reynolds are shoulder-to-shoulder with John Carroll and Paul Santamaria; Jenny Hocking is at one with Troy Bramson. Archives have never been a partisan issue in Australia. What they have required has been imagination and initiative.

In June 1920, on the site of the projected capitol of the mooted capital at the foot of Kurrajong Hill, the Prince of Wales laid a polished granite commemoration stone for a structure in which would be “enshrined the records of Australian achievement and the archives of the nation”. It was reported that the ceremony’s legacy would be “preserved in history for future generations of Australians”.

It wasn’t. The building never materialised; the stone disappeared; for another four decades, commonwealth record-keeping was, haphazardly, the domain of the Parliamentary Library.

From this, 60 years ago, the Commonwealth Archive Office, NAA’s forerunner, was finally peeled, forming part of the great Menzian legacy of collecting institutions, bracketed by the National Library and the National Gallery.

Archives had an innate appeal to Menzies, who argued that those ignorant of history could have “no sense of proportion” and “no benefit of experience in dealing with new problems as they arise”; records offered a guide to “what errors were made and should be avoided” in future.

Archives are paradoxically forward-looking institutions. Their creation gestures to confidence in a country’s future – a prediction that there will be great things worth recording and bad things worth pondering, even if these may initially be difficult to distinguish.

For it is impossible to foresee all the ways a record may become relevant. As Davison put it in his letter, NAA’s “most important users are not yet born”.

Consider NAA: SP605/7, 1951/2058, which is the 70-year-old butt of a certificate of exemption from the provisions of the Immigration Act, number 512058, for an officially “stateless” seven-year-old girl, Erika Strausz. 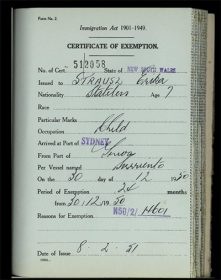 It was on this condition of “statelessness” that Erika’s son, Treasurer Josh Frydenberg, relied last year when his eligibility to sit in parliament was challenged in the Federal Court. He could find the relevant document with a few keystrokes as I did.

Yet in his recent budget, Frydenberg did no more than continue NAA on the short rations of the preceding decade, during which it has fallen ever further behind its mission, despite recommendations of not one but two recent reports.

Presented in February 2019, the Inquiry into Canberra’s National Institutions deemed NAA fundamental to “conserving, interpreting and facilitating engagement with Australia’s history, culture and national identity”, and among its recommendations acknowledged “the need for the digitisation of analogue audiovisual items in the collections of the institutions, to ensure that all such material is digitally preserved by 2025”. So that’s gone well.

For the past 18 months, the government has also been sitting on the Functional and Efficiency Review of NAA, which it disgorged only after repeated FOI requests from Senator Rex Patrick – perhaps because its author, respected former finance secretary David Tune, did not give them what they wanted.

To “stay contemporary in the digital age”, Tune concluded, would require substantial investment. He stressed the urgency of a seven-year program for the digitisation of at-risk records, at the additional cost of $67m albeit spread over seven years – in budgetary terms barely a rounding error.

But where the government is lavishing $500m on superseding a celebrated 20-year-old building at the Australian War Memorial, NAA has been reduced to rolling out a half-baked membership program so far raising a meagre $30,000.

For this “new way”, seemingly a stalking horse for an ideological drive to fund NAA by philanthropy, Stoker professed great enthusiasm: “It’s about public engagement. It’s about active citizenship, by participating and understanding what the archives do.”

It’s not and she doesn’t. NAA is not a gallery, museum or concert hall, which lend themselves readily to corporate largesse; it is not a prime ministerial photo opportunity or a marginal seat winner.

It is, in the first instance, a backstop of government, a promoter of good governance, and nowadays a pillar of cybersecurity, whose function only then is to “encourage, facilitate, publicise and sponsor the use of archival material”.

Tune draws attention in his review to conclusions of the Royal Commission into Institutional Responses to Child Sexual Abuse that poor record-keeping and information-sharing was a factor in failing to thwart offenders.

That is precisely why NAA falls into Stoker’s bailiwick rather than being part of the arts portfolio; that is why NAA has an advisory council chaired by a 76-year-old Queensland Liberal Party retainer with a fondness for family history, Denver Beanland, rather than a board with top-end-of-town connections.

Stoker is right to suggest that the subsidising of a public good by private interests would represent “an enormous transformation of the way we do archives in this country”.

It would also be an extremely bad transformation, a stealth privatisation of the national story, not to mention almost certainly unfeasible: Tune has already concluded that such course “would not yield significant income”, and involve the expenditure of almost as much as was made.

Let’s be clear. To wilfully let irreplaceable records decay is not a passive response to “the ageing process”. It is an unpersoning; it is, if you like, a cancellation. It is, arrogantly, to stand in for posterity, to say that this or that will never matter to anyone for any reason.

To invest in archives, by contrast, is to honour our historic endowments, to make a gift to our descendants, and to have sufficient faith in our own bona fides that we are prepared to abide their judgment.

We took 40 years to commit to Australian archives and 60 years to nurture them. On present trends, this government will undermine them irrevocably in the next five.

See also: Dear PM, you need to save the nation’s memory bank