You are here: Home » Articles filed under: 'News' » Article: 'The value of heritage – lip service to'

The value of heritage – lip service to

September 27th, 2019 | Browse other: News. | Tagged with: Governments only pay lip service to heritage, heritage is not appropriately resourced | 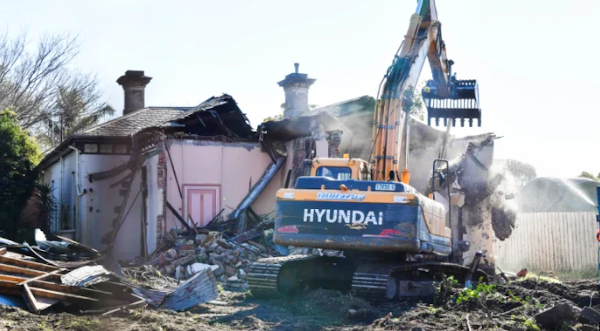 No. 368 Auburn Road, Hawthorn, as it was demolished in August. Credit: Joe Armao.

Every so often, the ongoing wanton destruction of heritage places gets a spotlight shone on it through high-profile demolitions such as the Corkman Irish Pub, or more recently a heritage home in Hawthorn. Regrettably, we at the National Trust know that avoidable destruction to heritage places goes on across Victoria on a weekly, if not daily basis. This destruction largely passes without comment.

The destruction of any recognised heritage place leaves a tangible loss. The building and all that it represented as a place of architectural merit, design, beauty and aesthetic contribution is gone. There is also an intangible cost. Less easy to quantify but none the less very real and genuinely dislocating. The identity of place becomes diluted and less well-defined. Powerless, communities see and sense the special character of places that has been nurtured for generations disappear from their physical and mental landscape. Destruction of our built heritage environment destroys the links with the past from which we can all draw sustenance. Memories, cultural associations and our sense of personal, local identity are diminished.

Why does this destruction and lack of respect for heritage occur? With rose-coloured glasses off, largely because heritage, seemingly, does not matter. Governments of all levels suggest that it does but this is only lip service. If heritage genuinely mattered then it would be appropriately resourced and it is not. Another reason is because heritage is strangely treated as “outside” of what is commonly regarded as the cultural sector of this state, such as museums, galleries, music, theatre, dance – a cultural sector that is generously funded. Yet heritage is rarely in the carved-up funding pie, despite being integral to our cultural wellbeing – a wellbeing that is equally as important as physical, mental and social wellbeing – again, domains that are generously funded by governments. Take sport. Of course it is important to Australians and our way of life, but so too is heritage and it remains starved of funding.

A lack of understanding of the true value of heritage further explains the parlous state of affairs. Many fail to appreciate how heritage contributes to social cohesion and to vibrant, prosperous and healthy communities. The value of heritage lies in creating a sense of place and connectedness. Heritage fails to be seen and understood for the true beneficial community force that it can be, especially through tourism and employment.

Solutions are aplenty to stop the bulldozers and afford heritage the respect it deserves. We concur with the recent editorial in The Age which called for the buck passing between the state and local governments to stop and that “it is time for the state and councils to make a commitment [to heritage]”. Such a commitment requires state government to adequately resource local government and to provide clear strategic guidance for the protection of heritage, and the removal of inconsistency across the board. Local government must be more proactive than reactive to heritage protection, and it would certainly help if local government ceased viewing heritage as an obstacle to development rather than the community benefit it can deliver.

There are numerous ways to adequately support heritage preservation and recognition. Some would barely cost governments anything other than the will to proceed. For decades, the National Trust has been calling for the establishment of a National Heritage Lottery, as is successfully operated in the UK, providing billions of pounds for heritage restoration programs. The time is now for one to be established to support Australia’s important heritage. The National Trust also calls on both federal and state governments to support the establishment of a “National Trust Heritage Revolving Fund” to save endangered, at-risk heritage all around the country. Revolving funds operate successfully in many other countries where at-risk heritage is purchased, restored and conserved, given new purpose and sold at a profit, with the funds generated used to save more heritage places.

If heritage does matter to Australia’s cultural wellbeing and has a genuinely acknowledged value to Australian society and its future, then all agencies working together to safeguard, champion and celebrate our rich and diverse heritage is essential.

Kristin Stegley is chairman of the National Trust of Australia (Victoria).