You are here: Home » Articles filed under: 'News' » Article: 'The value of school trips to Canberra'

The value of school trips to Canberra 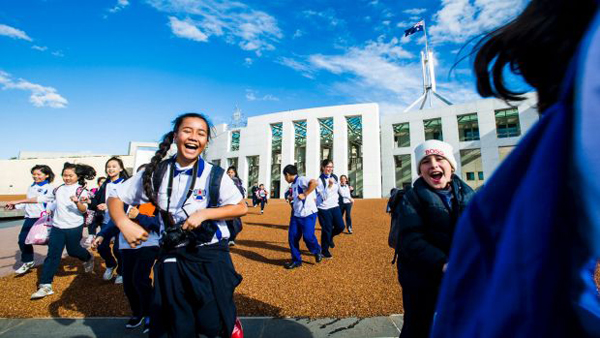 Year 5 and 6 students from from St Mel’s Catholic school in Sydney outside Parliament while on an excursion. Photo: Rohan Thomson.

Andrew Leigh, We must help the 20,000 school kids who miss out on trips to Canberra, The Sydney Morning Herald, 11 September 2017

Joe Hockey first decided to enter politics when his school visited Canberra. Watching parliamentarians from the gallery of Old Parliament House, he said to himself: “I’m going to be one of them.”

Reasonable people might disagree over the merits of Hockey’s decision, but it’s proof that a school visit to Canberra can change a life.

Politicians aren’t all that students see in our great city.

Visiting the National Gallery might be the first time a kid from regional Australia sees major artworks, produced by the likes of Rover Thomas, Sidney Nolan or Emily Kngwarreye.

Standing in the Australian War Memorial at the close of the day, a young person will hear the story of one of the 102,825 people featured on the roll of honour. For some, witnessing the Last Post ceremony might be their best insight into the valour of those who gave their lives for their country.

At the National Press Club, a federal minister delivering a policy address might find that the last question is asked by a visiting school student.

Attending Questacon, a child may suddenly decide on a career in science, as they learn about robotics, geology and space exploration.

If you didn’t grow up in Canberra, there’s a good chance your first visit to the bush capital came while you were in school. Every year, about 160,000 schoolchildren come to Canberra. According to Garry Watson, of the National Capital Educational Tourism Project, that means almost half of all Australian children visit Canberra at some point during their schooling.

About two-thirds of children who visit Canberra are supported by a program known as the parliament and civics education rebate. Established by the Howard government in 2006, it provides a modest grant to schools to partially offset the cost of travel and accommodation to Canberra. The program reflects the bipartisan view that there’s no better form of civic education than a trip to the nation’s capital.

But there’s a catch. A number of the favourite activities at our nation’s intuitions are oversubscribed. On one estimate, more than 20,000 children every year miss the chance to learn about science, the arts, history and democracy.

This isn’t just a loss for those children – it means our nation is failing to ensure that the next generation understand our institutions and feel part of our civic community. When disenchantment with politics is rising and involvement in political groups is falling, we can’t afford for thousands of youngsters to be falling through the cracks.

If Australia’s schoolchildren don’t understand how politics works, can we blame them when they fail to enrol? At a time when radical ideas are on the rise, why are we penny-pinching a high-quality and cost-effective civics program?

In an era of rising government debt, it’s understandable that our national civic institutions are tightening their belts. And, unlike for-profit providers, they don’t get reimbursed when they serve more children.

As a Labor member representing Canberra, I feel a special delight in welcoming people who are coming to our city for the first time. I know my ACT Labor colleagues Gai Brodtmann and Katy Gallagher share that pride. Yet this is about more than Canberra-boosting. Ensuing that schools can visit the capital is fundamental nation-building. From Ottawa to Delhi, Tokyo to Wellington, a school trip to the national capital is a critical element of ensuring that young people understand their political system.

This week, a fresh group of children will walk into the National Electoral Education Centre in Canberra. Chances are they’ll start off pretty sceptical. So the educators won’t ask them to vote for politicians, but to select what everyone might eat for lunch. After voting between chicken, ham and salad, they’ll never look at a preferential ballot paper the same way again. The students will discover the joy of voting, and walk out stronger citizens.

Let’s ensure that no young Australians miss that opportunity.

Dr Andrew Leigh is the federal member for Fenner.