You are here: Home » Articles filed under: 'News' » Article: '‘The value of what was destroyed is incalculable’'

‘The value of what was destroyed is incalculable’ 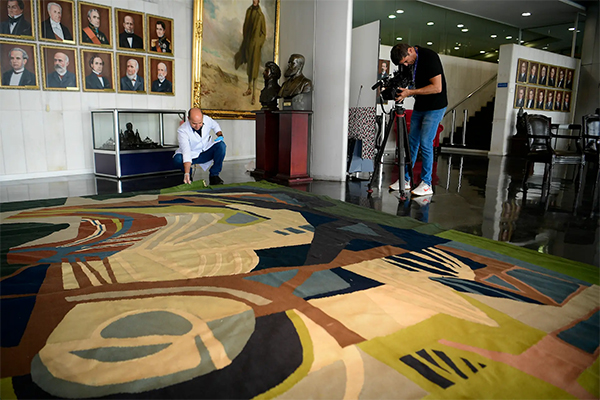 Claire Voon, ‘The value of what was destroyed is incalculable’: Brazilian authorities assess artworks damaged by rioting Bolsonaro supporters, The Art Newspaper, 17 January 2023

An extensive report chronicles the state of objects in the national collection following the riot in Brasília on 8 January.

As rioters in Brasília stormed Brazilian government buildings on 8 January, they smashed glass, burned furniture and graffitied walls. In their rampage—motivated by what they falsely believe was a stolen presidential election—they also damaged dozens of artworks, from a modernist statue of Justice to a tapestry by the landscape architect Roberto Burle Marx. Initial assessments of the destruction were published in a 50-page report released last week by Brazil’s National Historic and Artistic Heritage Institute.

The violent invasion began in the afternoon, when hundreds of far-right supporters of former President Jair Bolsonaro who refused to accept his election loss broke into Brazil’s Congress, the Supreme Court and Planalto presidential palace, all designed by the Pritzer-prize winning architect Oscar Niemeyer. For around four hours—in scenes reminiscent of the 6 January 2021 storming of the US Capitol—the mob trashed the buildings’ architecture and art. Photographs in the report show shattered ceramics, fragmented sculptures and punctured paintings. A portrait of former prime minister the Duke of Caxias was vandalised with a blue Adolf Hitler moustache, and one of Senator Renan Calheiros was slashed at the eyes. As Mulatas, a large genre painting of women by Emiliano di Cavalcanti, valued at $1.5m, was punctured several times.

Rogério Carvalho, a curator at the presidential palace, said in a statement that it will be possible to recover most of the vandalised works. “The value of what was destroyed is incalculable because of the history it represents,” he said. “The collection is a representation of all the presidents who represented the Brazilian people during this long period that begins with [president Juscelino Kubitschek]. This is its historical value. From an artistic point of view, Planalto certainly has one of the most important collections in the country, especially Brazilian Modernism.”

One iconic work that will be “very difficult” to restore, Carvalho added, is a 17th-century grandfather clock made by the French clockmaker Balthazar Martinot. Gifted to Dom João VI of Portugal and brought to Brazil in 1808, the gilded treasure was found knocked to the floor, with a hole where its face should be.

Elsewhere, Bolsonaristas broke sculptures by the Polish-born artist Frans Krajcberg and Brazilian sculptor Bruno Giorgi. In the Senate, they ripped the edge of a vibrant 1973 tapestry by Roberto Burle Marx, just above the artist’s stitched name and date. Outside the Supreme Court, someone took a marker to a statue titled A Justiça, a seated personification of Justice by Alfredo Ceschiatti, leaving a message on her torso: “perdeu, mané”—a riposte from Supreme Court judge Luis Roberto Barroso to a Bolsonaro supporter following the election results, roughly translating to, “You lost, fool”. Other unidentified works suffered water damage from sprinklers, set off by several fires. 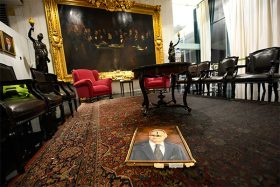 The report shows that most damage to the building is reversible, and its authors outline a list of emergency and long-term measures that will be taken to restore the buildings and artworks. Workers have already started replacing glass, cleaning graffiti and soiled carpets, and they continue to catalogue damaged artworks. Hundreds of rioters have since been arrested, and the attorney-general’s office intends to hold perpetrators financially responsible for the destruction.

The collection “is an artistic treasure of the Brazilian people, which belongs to the nation and whose integrity needs to be respected,” Brazil’s new culture minister, Margareth Menezes, said during a press conference. “The idea is to create a memorial about this violence we suffered, so that it never happens again.”