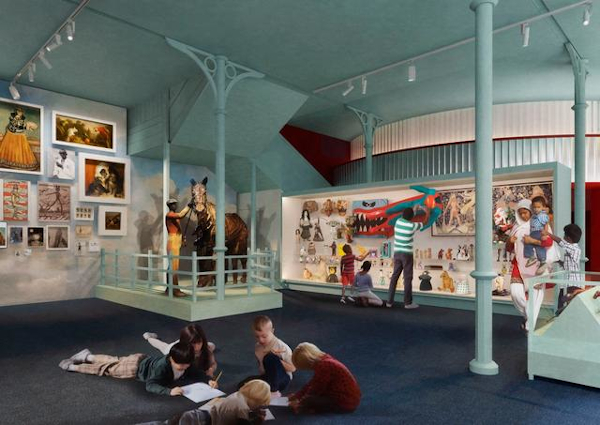 A rendering of the Adventure display in the Imagine Gallery of the renamed Young V&A. Image: Picture Plane © Victoria and Albert Museum, London.

East End institution will no longer cater to adults “revelling in nostalgia” and rather be focussed on those aged up to 14 years old
London’s Museum of Childhood, which is now being refurbished, is to be rebranded as the Young V&A. Tristram Hunt, the director of the Victoria and Albert Museum (which runs the childhood branch), stresses that it is much more fundamental than simply a change of name.

“It is to signal a complete transformation in its purpose from a museum about the social history of childhood to one focussed on building confidence, cultural capital and design skills,” Hunt tells The Art Newspaper. He is no longer setting out to appeal to adults “revelling in nostalgia with objects in glass cases” and rather being “much more focussed on the needs of children and young teenagers”. The target audience is those aged up to 14 years old.

Originally named the Bethnal Green Museum, it opened in 1872 in what was then the poverty-stricken East End, displaying various collections until it was turned into the Museum of Childhood by the V&A’s director Roy Strong in 1974. Its building was last renovated in 2003-06, with a new entrance, in a £5m project.

The current refurbishment will cost £13m, of which two thirds has been raised (including a donation from the UK’s Wolfson Foundation). Fundraising has been challenging with Covid-19, but Hunt is confident that it will be achieved.

The Museum of Childhood had been due to close in May 2020, but the pandemic meant that this happened two months earlier, in March last year. The 35,000 objects stored there have now been taken to the main V&A museum in South Kensington.

The refurbishment and redisplay have have been designed by two London firms, De Matos Ryan and AOC Architecture. There will be a similar area of display space as before the closure, presenting around 2,000 objects. The main galleries are to be named “Imagine”, “Play” and “Design”, and there will be a new temporary exhibition space. Hunt also expects the main V&A museum will lend appropriate objects, such as Samurai suits and Hockney prints.

Building work should start next month and Young V&A is due to open in summer 2023. This is just over a year later than anticipated, largely due to Covid-19.

Gina Koutsika, the Museum of Childhood director, left the museum in July, to be replaced by Helen Charman, who is now the V&A director of learning, national programmes and the Young V&A. Before its closure the museum was attracting around 350,000 visitors a year, but Hunt hopes that the number will now rise to 550,000.