You are here: Home » Articles filed under: 'News' » Article: '‘They’re not property’: the people who'

‘They’re not property’: the people who 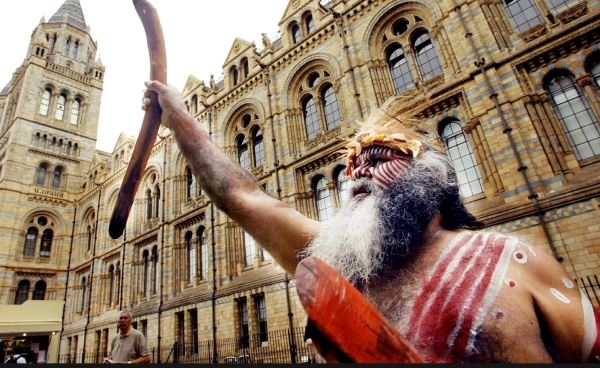 The Aborigine Major Sumner, of the Ngarrindjeri people, protests outside the Natural History Museum in 2003 over indigenous human remains. Photograph: Nicolas Asfouri/AFP/Getty Images.

David Shariatmadari, ‘They’re not property’: the people who want their ancestors back from British museums, The Guardian, 23 April 2019

The remains of indigenous people from all over the world have ended up in various British institutions. Why do their descendants have so much trouble getting them returned?

In November 2011, Ned David travelled the 8,500 miles from his home on Thursday Island, off the tip of Queensland, Australia, to the Natural History Museum in London. He was on a mission to collect the bones of his ancestors. The material included skulls, a jawbone and other fragments from the Torres Strait archipelago, collected by Europeans in the 19th century as scientific specimens and anthropological curios. The museum had agreed that the remains should be given back to their “originating community”, and it was finally time to take them home.

A private ceremony was held – David is reluctant to share the details with outsiders – and afterwards he and his fellow islanders went back to their hotel. But the mood wasn’t celebratory. “Mate,” he says, “it was sombre with a capital ‘S’. There was sort of this eerie feeling after all the hoo-ha and the media, and whatever. We sat around and no one spoke. I think it took a long time to realise the significance of what we had done.”

The handover had followed a consultation in which islanders were asked what they wanted to do about body parts that were sitting in collections on the other side of the world. Feelings ran high. “It’s probably one of those rare exercises we have done as a nation in which we were in total agreement with each other,” says David, who chairs the Gur A Baradharaw Kod, or Torres Strait Sea and Land council. “As one elder said: ‘How would you feel knowing that one of your family members is in some strange place and, more importantly, hasn’t been afforded the right burial?’ That has an impact on the psyche of a group.”

The islanders aren’t alone in their campaign to reclaim human remains from European museums. On 20 March this year, more than 150 years after they were cut from the corpse of the Ethiopian emperor Tewodros II by a British soldier, two locks of hair were returned by the National Army Museum in London after a request from Addis Ababa. A few days later, Norway’s King Harald V and Queen Sonja signed an agreement to repatriate thousands of artefacts, including a number of skulls, to the Rapa Nui people of Easter Island. And in April, German institutions will conduct their largest ever transfer of remains to Australia, involving 53 items from five sites in Munich, Stuttgart and Berlin. This follows a “joint declaration on the handling of colonial collections” by ministers from all 16 German states, which argued that human material “does not belong” behind glass.

These moves are dramatic, but in a sense, they represent the easier side of the restitution question. As the Greek president, Prokopis Pavlopoulos, reminded us recently – when he called the British Museum a “murky prison” holding the Parthenon marbles as “trophies” – art and artefacts have traditionally generated greater controversy. This week, the British secretary of state for culture, Jeremy Wright, ruled out any change in the law to allow national museums to return objects to their countries of origin.

In contrast, the moral case for giving back body parts, many taken without regard to the feelings of indigenous people who at the time were judged to be less than human, is harder to dispute. They are frequently in storage rather than on public display, and often of limited scientific interest. A 2,000-year-old piece of sculpture that pulls in the crowds is more difficult to give up.

Even so, says Sarah Morton, a lecturer in heritage at Bath Spa University, there has been a change in the way restitution is seen. “There’s more thinking about collections from the point of view of how things were acquired and the circumstances they were taken in,” she says. “People are addressing the colonial foundations of museums and challenging that.” She mentions the Pitt Rivers Museum in Oxford, which makes a point of its engagement with indigenous peoples. In 2018, it hosted the Museum Ethnographers Group annual conference, which had the theme of “decolonising the museum in practice”. For many institutions in the UK, Morton says: “It’s now about asking: how do we work with the communities these objects or remains came from? They may want them back, or they may be quite happy for them to stay in the museum and to work with the museum. But the ‘we’ve got them, they’re ours, we can do what we want’ position is starting to be untenable.”

That view is echoed by Janet Dugdale, executive director at National Museums Liverpool, which includes the city’s World Museum, home to 40,000 objects of ethnographic significance including 10,000 from Africa and 6,000 from Oceania. “Thirty years ago, museums would probably be saying: ‘They’re in our collection, we own them and it’s really important that they’re here in this country for people to research and understand them.’” There was also the anxiety – that has not entirely dissipated – about a domino effect. “The fear was: if you let one thing go, does that mean everything’s going to leave? And, of course, that doesn’t happen.” The process of deciding what to ask for, and gathering supporting evidence, is hugely labour-intensive for indigenous communities and even national governments, so a torrent of claims is unlikely. Calls for restitution are nevertheless part of a modern museum’s workload. “We absolutely acknowledge where our collections are from,” says Dugdale. “And if you do that, you have to be open to having some different conversations. But it’s not going to be the case that suddenly all museums are going to be denuded of everything. That’s just not realistic.”

As far as human remains are concerned, the shift in thinking may have come earlier to Britain than elsewhere in Europe. In 2000, the British and Australian prime ministers, Tony Blair and John Howard, issued a joint statement pledging to increase repatriation to Australian indigenous communities, the source of so much human material in UK museums. “In doing this,” it said, “the governments recognise the special connection that indigenous people have with ancestral remains, particularly where there are living descendants.”