You are here: Home » Articles filed under: 'News' » Article: 'Through the Plexiglass' 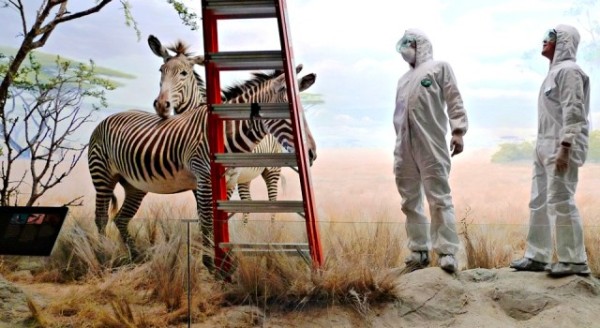 Bridgitte Barclay, Through the Plexiglass: A History of Museum Dioramas, The Atlantic, 14 October 2015

How animal displays have shaped, and been shaped by, humans’relationship with the natural world: an Object Lesson.

Sally: How do they get all these animals?

Sally: Do you think they were a family?

Glen: I hope so. Otherwise, they’d be walking around saying, “We just need a baby to finish this diorama.”

This exchange gets to the heart of habitat dioramas: Created to mimic the natural context of the animals that they contain, these scenes invite their viewers to question how those animals relate to each other, their environment, and humans. In her book The Breathless Zoo, Rachel Poliquin writes that “taxidermy is deeply marked by human longing,” exposing our hopes and fears about our place in the natural world. Dioramas represent an attempt to make sense of nature, but they also reveal humans’ deeply complicated relationship with it.

Habitat dioramas—the kind with a painted background, plants in the foreground, and an animated animal in mid-action—are generally credited to Carl Akeley, a taxidermist and expeditionist during the late 19th and early 20th centuries. Ironically, these museum displays were created, in part, to promote the conservation of the species that had been killed for display, highlighting the strange tension between animals as hunting trophies and creatures worthy of our empathy.

As Akeley saw it, though, the habitat diorama embodied a different tension, one between science and art. Akeley had become frustrated with the habitat-free, single-subject exhibition style common to most museums. If it were just about the animals, the older, curio-style displays would suffice—but Akeley wanted to give museum visitors a sense of the animal’s life, to animate the inanimate behind glass. On museum expeditions, he would measure the carcasses of his kills, preserve their hides with salt, and, once back at the museum, sculpt the animals’ musculature out of clay or plaster. Akeley’s 1890 muskrat diorama, which many consider the first specimen of the form he pioneered, is still viewable at the Milwaukee Public Museum, in an unassuming hallway near the bathroom.

The artful representation of the habitat is part of the narrative of dioramas. From the muskrats on, Akeley was careful to create animacy in his taxidermy, crafting habitats that conveyed both realism and emotion. On his plan for the American Museum of Natural History’s gorilla diorama, Akeley wrote: “I have been constantly aware of the rapid and disconcerting disappearance of African wildlife. [This] gave rise to the vision of the culmination of my work in a great museum exhibit, artistically conceived, which should perpetuate the animal life, the native customs, and the scenic beauties of Africa.” Both the real (animal skins and habitat details like plants) and the rendered (how the human artist interprets and frames the animal) work together to provide the narratives of habitat dioramas.