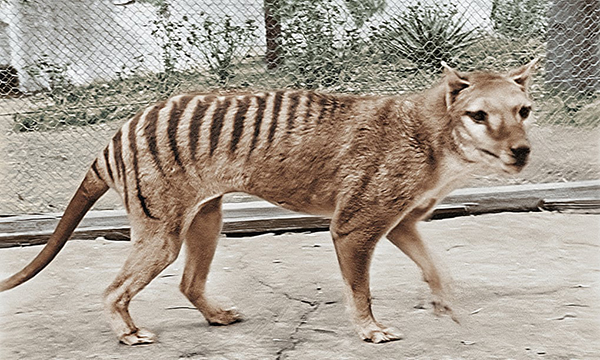 Colourised footage of the last-known Tasmanian tiger. Scientists say numbat DNA could be used to revive its cousin the thylacine. Photograph: National Film and Sound Archive of Australia.

Scientists are convinced reviving extinct species is no longer confined to science fiction. Can we really do it, and should we?

Researchers at DNA Zoo Australia have mapped the genome of the numbat for the first time. The milestone is notable in its own right, motivated by a desire to improve conservation efforts for the endangered termite-eating marsupial, which is now found only in small pockets of Western Australia.

But in announcing the development last week, scientists also had a more extraordinary suggestion: that the numbat’s DNA could be used as a blueprint to bring its extinct cousin, the thylacine, back from the dead.

The last known Tasmanian tiger died in 1936, but the apex predator – which once also roamed the Australian mainland and Kangaroo Island – continues to beguile and obsess even in extinction.

It seems hard to imagine that the carnivorous marsupials might once again roam the Apple Isle in future, but recent advances in gene-editing technology have scientists convinced that de-extinction is no longer confined to the realm of science fiction. Can we really revive a species from extinction, and if so, should we?

One de-extinction avenue scientists are exploring is to take the genome of a living species and edit its DNA to more closely resemble that of an extinct relative.

The first step in this process requires an intact genetic blueprint of the extinct animal, says Prof Andrew Pask at the University of Melbourne. In 2017, Pask’s team sequenced the thylacine genome from a juvenile specimen held in Museums Victoria’s collection. “It’s one of the best genome builds we have for an extinct animal,” he says.

“It’s in lots of little tiny pieces when we get it from an extinct specimen, so the DNA is broken up. 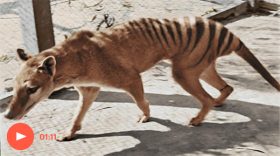 “The problem with any mammal genome, not just the thylacine … is that half of our genome is made up of repeat sequences,” Pask says – repeating patterns of A, C, G and T nucleotide bases. “Those bits are really hard to put back together when you’re building your puzzle, particularly because we don’t have the picture on the box of the puzzle – we don’t know what [the thylacine genome] is meant to look like.”

This is where the numbat genome could be helpful. Numbats and thylacines had a common ancestor that lived about 35m to 41m years ago – “not a long time in the evolutionary timescale”, says Parwinder Kaur, the director of DNA Zoo Australia and an associate professor at the University of Western Australia.

Kaur estimates numbats and thylacines share 95% of their DNA, and that the living marsupial’s genome could be used as a reference to fill in the gaps for the thylacine, for which “we don’t have a complete blueprint”.

Both species belong to the Dasyuromorphia order of animals, which also includes most of Australia’s carnivorous marsupials, such as Tasmanian devils, quolls and dunnarts.

The genetic makeup of these animals “has been highly conserved in terms of keeping its DNA in the same order,” Kaur says. 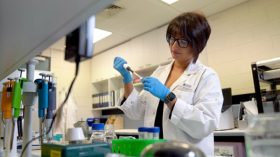 Associate Prof Parwinder Kaur says numbats and thylacines had a common ancestor that lived about 35m to 41m years ago. Photograph: University of Western Australia

The comprehensive thylacine genome can then be compared to a relative’s genome to determine which sequences differ, Pask says. Using Crispr-Cas9, the Nobel prize-winning genome editing method, it is possible to “turn all of those bits that are different to look like thylacine DNA”.

Though the numbat is genetically similar to the thylacine, it is not an ideal candidate for gene editing, Pask says. “We wouldn’t use the numbat because of its specialisation as an anteater. We would probably use another, like a Tasmanian devil or a dunnart … [which] eat meat, so they’re going to have a much more thylacine-like digestive system.”

Currently, gene editing isn’t advanced enough to be able to change all of the differing sequences to thylacine DNA in a timely manner. “It would take hundreds of years to go through and do it with our current technology,” Pask says. Any de-extinction via this process would therefore involve prioritising which DNA sequences to target, yielding a gene-edited animal genome that isn’t exactly the same as the extinct one.

Pask adds: “We then need to be able to turn a marsupial DNA-containing cell into a living marsupial, and we don’t have that technology developed yet either.”

Another way to bring a species back from the dead is to clone it, à la Dolly the sheep, using a method called somatic cell nuclear transfer. The process involves taking a nucleus – the structure containing the genome – from the cell of an extinct animal and inserting it into an egg of a living relative species, which has had its own nucleus removed.

It relies on intact cells from the extinct species, so is only practical when the last animal has recently died – which effectively rules the method out for thylacines.

Scientists have already used the technique successfully, although the triumph was short-lived. In 2003, researchers cloned a Pyrenean ibex, a subspecies of the Iberian wild goat that went extinct when Celia, the last living individual, was killed by a falling tree. The team successfully cloned Celia, reviving the subspecies from extinction for several minutes, before the newborn animal died of a lung defect. 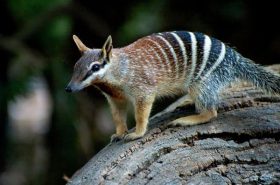 A numbat, an endangered termite-eating marsupial which shares 95% of its DNA with the thylacine. Photograph: University of Western Australia

The aptly named Lazarus project, led by Prof Mike Archer, a palaeontologist at the University of New South Wales, is taking a similar approach to try to bring back the southern gastric-brooding frog. The last known specimen of the frog, which was native to Queensland, died in 1983, but the team have some well-preserved tissues.

Though the project has successfully produced early-stage embryos, no clones so far have survived to tadpoles or adult frogs.

How to bring species back from the dead is one question; whether we should is another.

Pask believes the thylacine is one of the best candidates for de-extinction efforts because there are sound ecological reasons for bringing it back. Apex predators like the Tasmanian tiger play an important role in stabilising ecosystems, he says.

Archer agrees, citing the successful reintroduction of wolves to Yellowstone national park in the US. “The primary habitat where the thylacine was is still there, and the animals that they fed on are still there,” he says.

Archer – who previously led the Australian Museum’s 1999 effort to revive the thylacine, which was scrapped in 2005 – says de-extinction is “too enticing [and] probably too important” a research topic for the scientific community not to progress on. 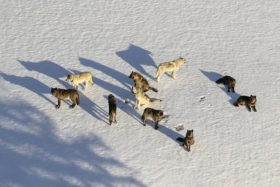 A wolf pack in Yellowstone national park, Wyoming. Wolves have repopulated the American west with remarkable speed since their reintroduction 25 years ago. Photograph: AP

“There are those people who would argue that this is playing God … I don’t buy that,” he says. “This is about playing smart human to redress the times when we inappropriately played God by exterminating things.”

In the US, an effort to bring back the woolly mammoth by editing the genome of the Asian elephant has been widely publicised, and also criticised.

“Ecologically, it’s a very hard argument to make to bring that animal back,” Pask says, though he is personally excited by the project. “I don’t think it’s particularly good for the environment or the mammoth.”

Because woolly mammoths have been extinct for thousands of years, it is more difficult to piece together an intact genome, Pask says. “It’s likely then that whatever the animal is that they bring back will be more of an amalgamation between the Asian elephant and the mammoth.”

The project to genetically revive the mammoth “undermines the ongoing effort to save every sad species on the brink”, Mark Carnall, an Oxford University Museum of Natural History curator, wrote in this masthead in 2017.

Pask agrees that money is better spent on conservation efforts for endangered species. “That is a much more noble pursuit than trying to bring back something that’s been dead for [thousands of] years.”

But he believes the same approaches that underpin de-extinction efforts are useful in the short-term for marsupial conservation, particularly in the face of existential threats like increasingly severe bushfires. “The recent bushfires that we’ve had started to wipe out … populations of marsupials that have different genetic diversity.

“If we were able to go out and collect cells [from fire-affected species], freeze them down, and then bring back members of that species with that genetic diversity, we could really help safeguard marsupials against things like these horrendous weather events.

“We want to do that work for conservation benefits right now for marsupials,” he says. “It will one day then provide the basis that we would need if we want to consider bringing the thylacine back.”