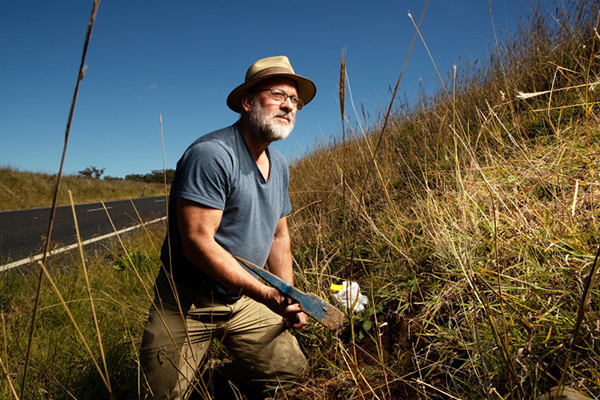 Tim Flannery searches for fossils on the side of the road in the Upper Hunter. He found several bone fragments from mammals that are 4 to 5 million years old. Credit: Janie Barrett.

With news about to break that he had been awarded the Geddes Environment Medal by the Royal Scottish Geographical Society, Tim Flannery spent the day fossicking in a windy highway cutting in the Hunter Valley with his seven-year-old son Coleby, hoping that recent rains may have revealed fossils from the Pliocene era when crocodiles patrolled the NSW plain.

Despite finding ancient fragments of bone, Professor Flannery – who was visiting the area with Australian Museum paleontologist Dr Matthew McCurry – was unimpressed with his haul. Nonetheless, he ended the day in good spirits, thrilled to receive recognition for his contribution to science communication.

“It gives me a chance to highlight the good climate work being done in Australia, but also the fact the federal government is way, way behind the rest of the world,” he said.

Professor Flannery – famous as an academic, broadcaster, scientist, explorer, author, and conservationist – has never backed away from the politics of his field.

“Reading between the lines, I think they recognise that Australia can be a difficult environment for this sort of work,” he said.

It is also no coincidence that the award is being given this week – as the world prepares for US President Joe Biden’s climate summit – nor that it is being conferred by a Scottish body in the months before Glasgow plays host to the upcoming United Nations climate talks.

Professor Flannery believes that because Australia is the largest exporter of coal and natural gas in the world, the fossil fuel industry has powerful “tendrils” into government, leading Australian politicians to deny the significance of climate change and the need for immediate action on the issue.

He said he expects the Biden administration to set “very, very aggressive” reductions targets and expects other nations to “help carry the weight”. 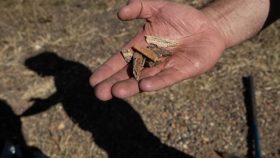 “They are not mincing words anymore and something will have to give. The world is expecting real action this decade.”