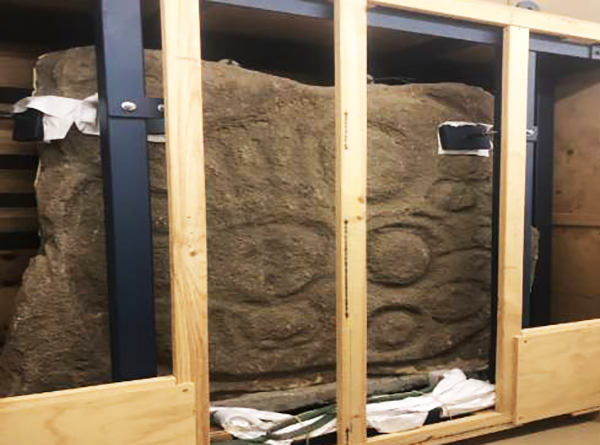 The Tasmanian Museum and Art Gallery will return sacred North-West rock art to the Aboriginal community.

In a statement, the TMAG board said it recognised that one large petroglyph panel and a number of smaller pieces in its collection belonged to the Aboriginal community.

“The board recognises the significance of this material as part of an extensive and complex cultural landscape at Preminghana,” it said.

“The TMAG board resolved that it intends to deaccession the petroglyphs and return them to the Tasmanian Aboriginal community, once the necessary arrangements and approvals are in place.”

Aboriginal Land Council chair Michael Mansell said Aboriginal people would be “thrilled to the teeth” about the return of the rock art to the people and place from which it was taken near Marrawah.

“The museum board acted with great sensitivity,” Mr Mansell said.

“The quick response saved further Aboriginal anxiety which would have been caused by delay.

“We understand the board were alive to the importance of rectifying the act of cultural vandalism caused by past museum directors authorising the sawing away of great slabs of rock art from the rest of the massive piece.

“It was like cutting off the finger of Mona Lisa so that if the rest of the painting was destroyed part of it was saved.”

Mr Mansell thanked the museum for honouring the wishes of the Aboriginal community who met on Tuesday and decided the sacred rocks should be returned.

“The Aborigines who carved out symbols of tribes and great warriors in these sacred rocks between 3,000 and 8,000 years ago described where the villages and camping grounds were, walking tracks and significant events on the ground and in space,” he said.

“The rock carvings are the oldest written record of human history in Tasmania going back between 3,000 and 8,000 years.”

It is expected the rocks will be returned to the North West Coast next year.

“TMAG has written to representatives of the Tasmanian Aboriginal community to formally advise of its intention to deaccession the Preminghana material and to continue the discussions around next steps,” the board statement said.