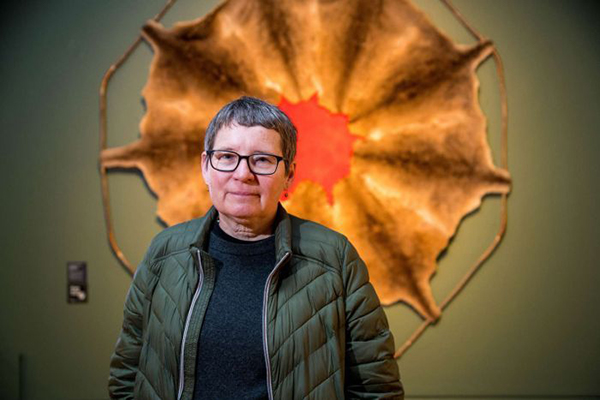 Julie Gough with her 2011 work (In)Case of Emergency. TMAG/Alastair Bett.

There’s an air of “politeness” to the Tasmanian Museum and Art Gallery’s winter exhibition, at first glance, that belies the anger, pain and terrible — true — events from which the art is forged.

The effect is mostly due to the staid aesthetic of the Victorian-era furniture and paintings populating the exhibition galleries, but also the conservative aesthetic of museums: wooden parquetry floors, glass vitrines, bollards and cordons separating viewer from object.

Slowly, as you walk through the galleries, a sense of dread starts to seep in. You’re reading an embroidered text on a well-worn chaise longue, when you realise it’s not embroidered — it is made from pins stuck into the fabric. It reads:

Saturday 27 November 1830. The Hobart Town Courier. Two of the aborigines who have been living so long at Mr Robinson’s … absconded this morning, after divesting themselves entirely of the clothing given to them … They were encountered in the bush by two broom makers, one a cripple, who succeeded in taking them. The blacks made every effort to escape. Several persons at work in the bush fled at the sight of them. Nothing can tame them. 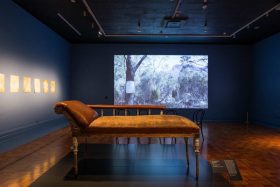 Gough has written that the chaise represents the “comfort of the upper classes in ‘settling’ into a supposedly colonised Van Diemen’s Land”. Supplied: TMAG/Alastair Bett.

She found the text as part of her decades-deep research into Tasmanian history, which has fuelled almost her entire practice — including the 37 artworks in her exhibition Tense Past, currently showing at the Tasmanian Museum and Art Gallery (TMAG). 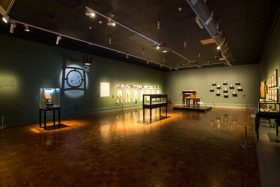 When the report above appeared in the Hobart Town Courier, Lieutenant-Governor George Arthur had just wrapped up his Black Line campaign: a moving human ‘cordon’ (comprised of settlers and soldiers) to round up the remaining indigenous population and exile them to a single outpost (ultimately Wybalenna on Flinders Island was chosen).

The Black Line was a failure, but Governor Arthur’s broader Black War (1824-1832), and colonisation generally, was devastating: in 40 years in Tasmania, the indigenous population went from approximately 8000 to less than 50.

There is no evidence of a widespread influenza or similar epidemic in that time that might account for the deaths.

The question of what happened to Tasmania’s Aboriginal people has been the driving force for Gough’s art practice over 25 years.

This line of enquiry began when she moved to Tasmania at the end of 1993 and began to map the history of her Trawlwoolway ancestors from north-east Tasmania.

Her ongoing research into Tasmanian Aboriginal children who were removed from their families as part of the colonial project led to two new works that premiered in June: the video work Crime Scene, exhibited in Tense Past, and the outdoor installation Missing or Dead.

Crime Scene was inspired by court records relating to an incident in which Gough’s 12-year-old ancestor Dalrymple Briggs, who had been separated from her parents and forced into servitude, was shot and wounded by her master. 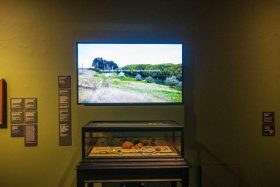 Missing or Dead, which premiered as part of this year’s Dark Mofo festival, took over a patch of bush in Hobart’s Queens Domain; the labyrinthine walking track was fly-postered with 185 A4 sheets of paper emblazoned “Missing” or “Dead”, each bearing the details of an Aboriginal child who went missing or died or was killed in Tasmania between 1803 and 1850.

Some were abducted; some were shot, some drowned, and some were thrown into fires to burn alive. The body of one boy who died while living with a white family was decapitated and the head embalmed, for scientific use.

As Gough told ABC: “Imagine bringing up a child from another culture and then going, ‘They’re dead and now I’ll use their body parts, put their head in a jar’.”