You are here: Home » Articles filed under: 'News' » Article: 'TMAG tells a moth from a butterfly'

TMAG tells a moth from a butterfly

March 15th, 2018 | Browse other: News. | Tagged with: How to tell a moth from a butterfly, Tasmanian Museum and Art Gallery | 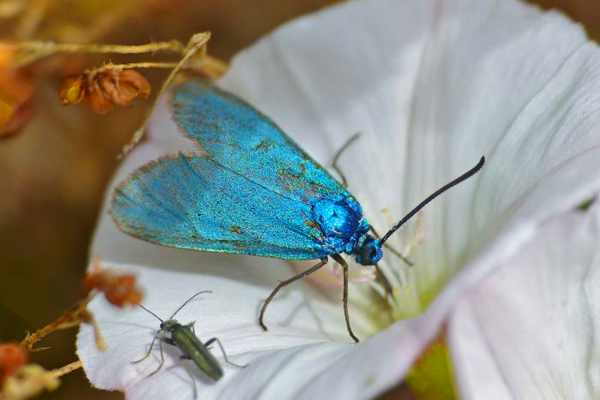 The shiny forester moth has straight antennae, a tell-tale sign to indicate it’s not a butterfly. Wikimedia Commons: Bernard Dupont.

Carol Rääbus, How to tell a moth from a butterfly and why their genitals are so special, ABC News, 11 March 2018

Moths have been on the planet for millions of years, flying around like tiny, non-fire-breathing dragons.

But because most of them are nocturnal, we often hardly notice them.

Cathy Byrne is not one of those people.

She is the curator of zoology at the Tasmanian Museum and Art Gallery and has spent years identifying and describing moths.

“They’re just as beautiful as their cousins the butterflies,” she told Louise Saunders on ABC Radio Hobart.

Butterflies and moths are closely related and are in the same scientific order of Lepidoptera, but they are not the same insects.

While most moths have evolved to be active at night, there are some which fly during the day and some butterflies which will fly late into the dusk.

The best way to tell if a fluttering insect is a moth or butterfly, without dissecting it, is to look at its antennae.

“The easiest way to tell them apart is the clubbed antennae that you see on the butterfly,” Dr Byrne said.

“Moths don’t usually have that. There is one family of moths that does, but mostly moth antennae are either branched or they don’t have any branches at all, and they definitely don’t have the bump.”

Moths evolved to embrace the darkness to avoid being eaten; it also helps them get around easier.

“Winds are much more stable at night, so they’re able to fly around a lot more easily; that’s why most moths by far are nocturnal,” Dr Byrne said.