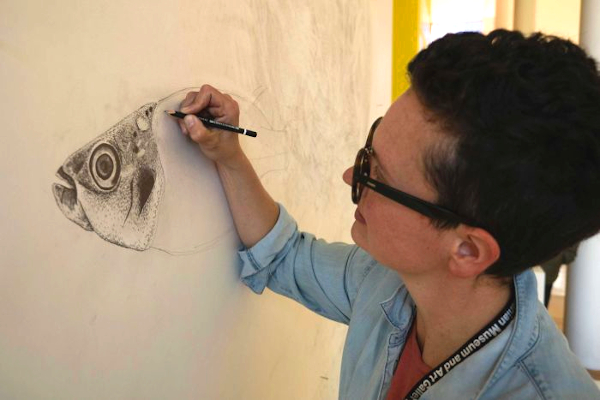 Lucienne Rickard spends about six hours each day drawing a masterpiece that depicts an extinct creature, only to erase the finished product.

The artist will follow this process for a year as part of a durational performance called Extinction Studies, which aims to draw attention to biodiversity issues.

The idea came to her after seeing a series of documentaries about extinct species.

“I get really upset about this. I feel sorry and sick and sad for about half an hour,” Ms Rickard said.

“But then I have to cook dinner, and pay a bill, and get up and go to work … and I forget about it.

“I wanted to do something where I don’t let people forget about it. I’m the bad-news bearer for a year.”

Until September 2020, Ms Rickard will return to the same space in the Tasmanian Museum and Art Gallery in Hobart each morning and choose an extinct species to draw.

Passers-by will see the whole art process, including the erasing at the end of the day.

She uses Red List, the United Nations-backed authority on endangered and extinct species, which has enough creatures on the list from the mid-1990s to do the project for five or six years.

And she’s not picky — she kicked off with a rodent from the Torres Strait.

“Rodents don’t get a lot of attention, which is very unfortunate, they aren’t very charismatic,” she told Jane Longhurst on ABC Radio Hobart.

Day two was a bushwren from New Zealand and day three was a Malaysian snail.

“I could spend quite a lot of time drawing Australian species, but I feel with issues like extinction and climate change, parochialism is pointless,” Ms Rickard said.
“We need to care about these issues on a global scale.”

Ghosts of extinctions past

Ms Rickard said she would leave the eraser rubbings in view.

“The floor is filthy, it’s covered in shavings,” she said.

“We’re leaving them there for the year; it’s quite a pain for the cleaner.

“He told me it’s very triggering for him to walk past and not clean up the shavings.”

Ms Rickard had planned to use the same piece of paper, with traces of the previous drawings remaining.

“I think the ghost of the drawing remaining on the paper is quite a nice thing. Their ghosts merge and mingle.

“It will end up as a murky extinction creature.”

By the second week of the project, Ms Rickard realised she might have to change paper every month or two.