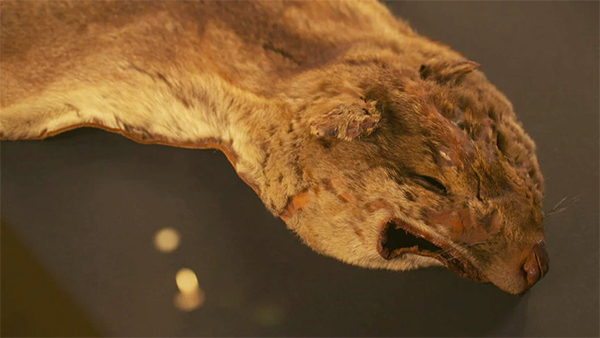 The endling of a species: the skin of the last-known thylacine, rediscovered in a museum cupboard. (ABC News: Owain Stia-James).

The remains of the last-known thylacine — thought lost for more than 85 years — were kept in a cupboard in a Tasmanian museum for decades, with their significance only recently being realised.

The female thylacine, or Tasmanian tiger, died at the Hobart Zoo on September 7, 1936, and was supposedly transferred to the Tasmanian Museum and Art Gallery (TMAG), but it has long been assumed its skin and skeleton went missing.

But detective work from researcher Robert Paddle and museum curator of vertebrate zoology Kathryn Medlock has resulted in the remains, which had been stored in a cupboard of the museum’s education office, now being understood as belonging to the last thylacine.

Dr Medlock said a failure to correctly catalogue and record the specimen resulted in its skin being taken around the country as a travelling exhibit, with museum staff blissfully unaware they were handling the last of the species.

“It was chosen because it was the best skin in the collection, we didn’t know then it was the last one,” she said.

“This particular skin and skeleton that we’ve discovered has rarely been on display.” 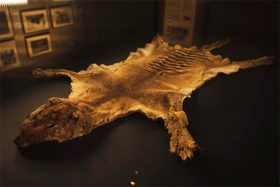 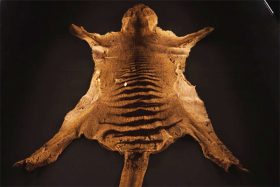 The thylacine’s distinctive stripes are clearly visible on the skin.(ABC News: Maren Preuss). 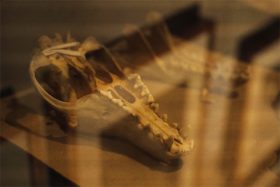 The skull of the last-known thylacine, on display in a glass cabinet.(ABC News: Maren Preuss). 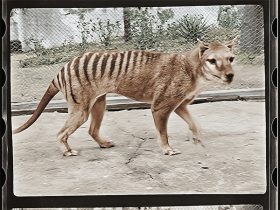 The thylacine, or Tasmanian tiger, went extinct in 1936.(Supplied: NFSA).

‘We didn’t understand the significance’

Dr Medlock said the disappearance of the specimen was also partly explained by the fact that no-one believed the female thylacine was the last one when it died.

“At that time they thought there were still animals out in the bush, in fact, I think the fauna board actually issued a permit for someone to collect one. 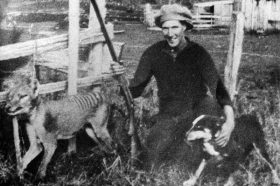 Tasmanian farmer Wilfred Batty poses with a thylacine shot at his property in 1930, now thought to be the last Tasmanian tiger in the wild. Six years later, the tiger at Hobart zoo would die, with the species considered extinct.(Wikipedia).

“I know the museum offered 50 pounds for a thylacine if someone could catch one and bring one in, but no-one did,” she said.

“They didn’t really know it was the last one … and it is likely that there were still some in the bush at that time but as the endling, this is the last specimen.” 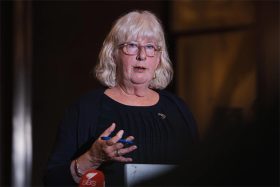 Kathryn Medlock says the skin had rarely been on display.(ABC News: Maren Preuss).

Dr Medlock said the skin and skeleton had been moved to the museum’s zoological section in the Hobart suburb of Rosny.

“We’ve got them stored in special acid-free boxes and it’s dark, the conditions are good,” she said.

“We want them to last, so they’re looked after very carefully.”

It has long been believed that the last-known thylacine was a male, sometimes known as Benjamin, but Dr Paddle said that was a rumour peddled by a “bullshit artist”. 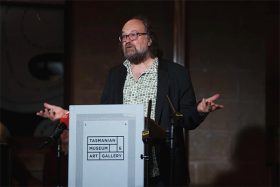 He said the theory there was a thylacine known as Benjamin at the Hobart Zoo had been debunked.

“It’s an unfortunate myth,” he said.

“It’s time to remove it from the literature. It’s so appalling Kathryn [Medlock] and I haven’t even mentioned it in the [research] paper.

“We just want people to forget it please.”