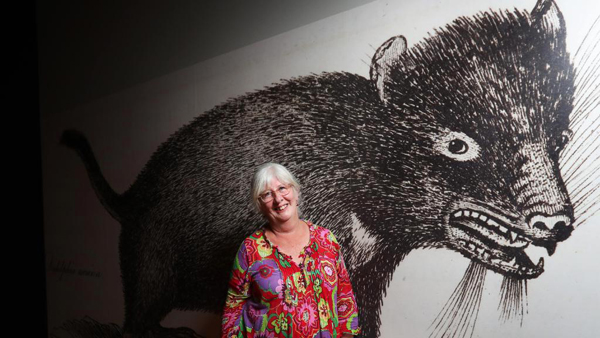 On show: Kathryn Medlock in front of an illustration at the Tasmanian Devil exhibition. Picture: Nikki Davis-Jones.

The poor creature was somewhat doomed from the outset.

When you name a feisty, toothy marsupial a devil, it’s bound to cop some flak.

Tasmanian Museum and Art Gallery senior curator of vertebrate zoology Kathryn Medlock says since the Tasmanian devil was named by early European settlers after hearing its “devilish” screams and growls, it fell out of favour.

“It had a reputation for many years as being fierce and nasty, a vicious predator with few redeeming features,” Kathryn says.

“Farmers in particular saw it as a threat to the island’s agriculture and didn’t like them because they believed they preyed on lambs.”

But, she says, 21 years after Devil Facial Tumour Disease first came to light in 1996, which has seen their numbers listed as endangered, the animal has experienced a renaissance and is being celebrated in a new exhibition at TMAG, The Remarkable Tasmanian Devil, running until May 6, 2018.

“People’s perception of the devil has changed for the better. They’ve softened their attitudes towards it. Because of the disease it gets a lot more sympathy,” Kathryn says.

“Even in areas where devil numbers have dropped, farmers are discovering they now have to clean up dead animal carcasses.

“We now know the devils don’t pose a threat.”’

Kathryn says the exhibition uses history, the natural sciences and art to tell little-known stories of the animal.

For instance, in 1914, Tasmania’s 12th battalion adopted a Tasmanian devil (“Bluey”) and took him to World War I as their mascot, travelling to Egypt, where he lived near the Great Pyramid.

“We’re not sure what happened to Bluey, but because the Cairo Zoological Gardens offered to purchase him we assume he ended up there,” she says.

In 1939, three devils were captured in the Tasmanian bush and sent to Hollywood at the request of Warner Brothers film studio, and given to three film starlets, who presented the devils to Los Angeles Zoo.

“The first cartoon appeared in 1954, some time after the devils were taken to Hollywood, so we don’t think there was a link,” Kathryn says.

“The cartoon certainly did establish the Tasmanian devil in popular culture.”

“Visitors will learn why the devil has endured when Tasmania’s other large predator, the thylacine, succumbed within 150 years of European arrival,” Janet says.

“There are simple actions we can all take, such as slowing down and driving more carefully at night to prevent killing devils on our roads.”

Kathryn, who is a zoologist by training, says devils can eat up to 40 per cent of their own body weight in one meal, eating any flesh — alive or dead.

Afterwards they sleep for two to three days, before moving on to find another meal.

She says because of the facial disease, the devil is defined as “facing a high risk of extinction in the near future”, and predicted to possibly be extinct within 25 years.

“It is difficult to know how many devils there were at their peak, however in some areas their numbers have been reduced by more than 90 per cent due to DFTD.

“The exhibition shows how firefly beetles are helping save the devil,” Kathryn says.

The enzyme they produce, called luciferase, helps scientists see glowing tumour cells in the lab, and test the effectiveness of possible treatments.”

“Luciferase comes from the Latin word lucifer, which means ‘devil’.”