You are here: Home » Articles filed under: 'News' » Article: 'Tony Abbott appointed to AWM Board'

Tony Abbott appointed to AWM Board 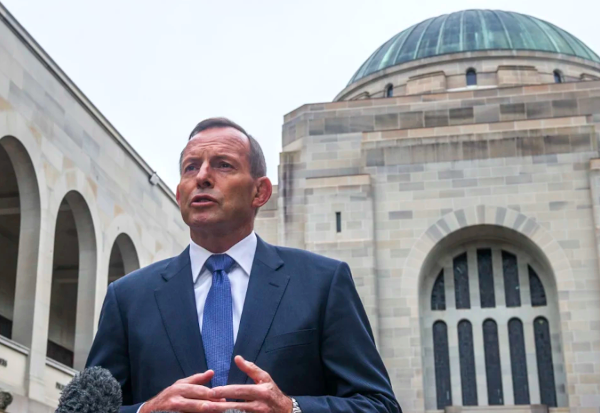 Tony Abbott will join the high-powered board of the Australian War Memorial in the former prime minister’s first official appointment since his political career ended at the May 18 election.

The Morrison government will on Tuesday announce his appointment to fill a vacancy left following the death of acclaimed author, historian and former editor of The Age, Les Carlyon, in March.

Veterans Affairs Minister Darren Chester said Mr Abbott would bring “dedication, passion and knowledge” with him as the Memorial undergoes a $500 million upgrade to tell the stories of more recent conflicts.

He said Mr Abbott had a long history and interest of supporting veterans and their families and his experience would ensure the stories from recent military conflicts in Afghanistan, Iraq, the Solomon Islands and East Timor would be “proudly” told.

“As Prime Minister, Mr Abbott led the case to build the Sir John Monash Centre in Villers-Bretonneux to tell the stories and honour the thousands of fallen Australians who served in the First World War,” Mr Chester said.

“I congratulate Mr Abbott on his appointment and am confident he will ensure we continue to record the stories of those who have served, in their words, and be able to share those stories to the more than 1 million visitors to the memorial each year.”

Mr Abbott, a keen war history buff, has kept a low profile since his election defeat but said in his election night concession speech he would “continue to serve”.

Since 1998, he has convened the annual Pollie Pedal charity bike ride, which has raised more than $5 million for medical research, indigenous health scholarships and Soldier On.

Mr Abbott said it was a “great privilege” to be asked to serve on the board.

“I look forward to working with the Director, board members and staff of this wonderful institution to ensure that the service and sacrifice of our armed forces are properly appreciated and honoured,” he said.

A national search is currently under way to find a replacement for Brendan Nelson, who will step down as the director of the Australian War Memorial when his term ends at the end of the year.

The Age and The Sydney Morning Herald first reported in August that Mr Abbott was the front runner to fill the part-time member vacancy of a three-year term, which attracts a modest annual salary of $26,340 plus additional travel and meal allowances.

The influential Australian War Memorial board is headed by Seven West chairman Kerry Stokes, a well-known benefactor to Australia’s national cultural institutions who donates to a wide range of other charitable causes. He was reappointed for a second three-year term by the government in August 2017.

The memorial’s multimillion dollar expansion, supported federally by both major parties, will see Anzac Hall at the rear of the building knocked down and rebuilt with more than double the exhibition space.

But it has attracted some criticism, with a group of prominent Australians uniting in March to call for it to be halted.

Novelists Tom Keneally and Richard Flanagan, author and speechwriter Don Watson, Australia’s first female premier Carmen Lawrence, historians and a group of ex-senior public servants and diplomats were among 83 signatories to an open letter saying the money could be better spent.