You are here: Home » Articles filed under: 'News' » Article: 'Touristification, Venice & the European' 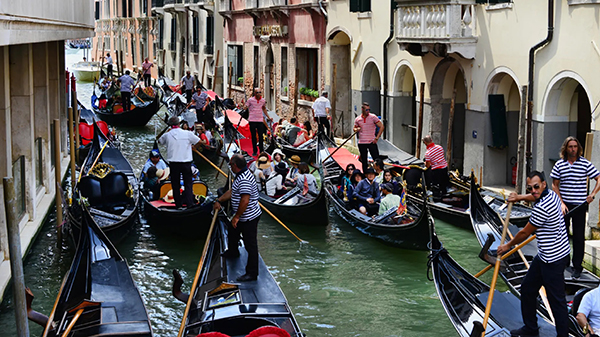 Gondolas full of tourists in a “traffic jam”. Photograph: Alamy.

Young Venetians had skipped school to join the global youth climate strike, holding placards with statements such as “If climate was a bank, you’d save it.” The movement is especially relevant in Venice, since a 50cm rise in sea levels could see the city vanish beneath the waves.

Critical as the climate crisis is, the city faces a more immediate risk: the rising tide of tourists, presently estimated at 25 million a year and projected to reach 38 million by 2025.

Europe, already the world’s largest tourism market, received 713 million international visitors in 2018, an 8% increase on the previous year, according to the UN World Tourism Organization. But, in European cities, the increase is far greater: since 2008, overnight stays have jumped 57%. While tourism provides significant economic benefit – contributing €2bn annually in gross revenue to Venice alone – overtourism is causing cities like Barcelona, Amsterdam, Dubrovnik and others to make international headlines on issues ranging from housing affordability, environmental degradation and the destruction of local life.

In 2016 in Dubrovnik, residents were outraged when the mayor asked them to stay home to avoid the dangerous levels of crowds disembarking from multiple cruise ships. The new mayor, Mato Frankovic, has since capped the number of cruise ships that can dock in the city at two per day, cut souvenir stalls by 80% and cut restaurant seating in public spaces by 30%. But similar issues of overcrowding in Palma de Mallorca, San Sebastián, Prague and Salzburg have brought locals out into the streets in increasingly impassioned protests.

One of the most dramatic was Venice’s 2016 No Grandi Navi (“No Big Ships”) protest, when locals took to the Giudecca Canal in small fishing boats to block the passage of six colossal cruise ships. And, although plans have been announced this year to reroute the largest ships to a new dock in Marghera (still to be built), campaigners still argue for a dock outside the lagoon at the Lido, where heavy cargo ships historically unloaded.

This is just one of the ways the Venetian Republic safeguarded the equilibrium of the lagoon and the complex system of commerce around it. In fact, the act of sustaining the lagoon for over a millennium is a singular human achievement, because a lagoon by definition is a temporary natural phenomenon. Venice’s lagoon would have silted in 500 years ago if it hadn’t been for careful environmental protection, sensitive technical intervention and strict commercial regulation – a historic blueprint that provides useful lessons for tourism.

A new generation of concerned citizens and entrepreneurs is taking up that challenge, combining grassroots activism with socially sensitive, sustainable initiatives to save their island home. Consider waste. What comes into Venice must be removed again via a complex collection and recycling system. Every day an army of sanitation workers knocks on every door in the city, collecting waste to be ferried away on barges. The same rules and fines, however, do not apply to tourists – despite the fact that during high season the bins around Piazza San Marco have to be emptied every half an hour.

Troubled by the plastic waste generated by their two boutique hotels – the Novecento and Hotel Flora – the Romanelli family have taken action, eliminating plastic bottles from their properties, and encouraging guests to use steel flasks at Venice’s historic water fountains, for which they supply a map. “We don’t pretend to be [Leonardo] DiCaprio, but through these small actions we hope to do something positive,” says the owner, Gioele Romanelli.

With just 50 rooms and 40 members of staff, they calculate they save 36,000 plastic bottles a year. Multiply that by the estimated 40,000 guest beds in Venice – to say nothing of restaurants or the waste unloaded from cruise ships – and you could save hundreds of millions of plastic bottles a year. “Our children learn about these issues at school and all of them carry their own water flasks, so why not us?” concludes Romanelli’s wife, Heiby.

Addressing the issue of waste is only the most tangible effort to create a more sustainable tourism in Venice.This June will see the launch of Fairbnb, a not-for-profit home-sharing site that only permits resident hosts; mandates one home per host; and contributes half of the 15% booking fee to social projects.

Their launch is timely. Since 2015, Airbnb tourist rentals in Venice have tripled from 2,441 to 8,320, according to Airdna. Of those, 80% are entire home rentals, many are owned by agencies or foreign investors and a 2018 report by Centro Studi di Federalberghi Nazionale found the most prolific host in the city had 135 listings.

Other European cities are responding to similar problems. Barcelona is prosecuting unlicensed apartments and has secured access to Airbnb’s host data in order to pursue offenders. In Madrid, home sharing is now only permitted in houses with their own entrances. Palma, meanwhile, has banned short-term tourist rentals completely in flats that are part of multi-family residential housing, although it is still possible to rent detached homes and villas, provided they are not in a protected area.

“Without significant regulation of the rental market [in Italy], we saw the only way to change things was to provide a market alternative,” says Emanuele dal Carlo, a Venetian who is one of five co-founders of Fairbnb, which crowdfunded for its startup cash. “We’re not anti-Airbnb – we just want to show that it’s possible to create a tourism model that works for local communities as well as travellers.”

On booking, Fairbnb renters decide which project to support and are invited to visit or participate: in Venice this could mean joining volunteers cleaning graffiti or helping turn a centuries-old squero (boat yard) into an educational centre.

“We want to bring back the connection between tourists and locals that has been lost,” dal Carlo says. “Nowadays you can go to a place and virtually never meet a local. But this way you can join them in their real pursuits or even just share a drink together.”