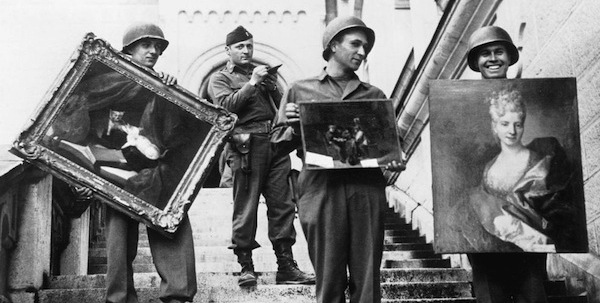 The real Monuments Man James Rorimer, with notepad, as he supervises American GI’s hand-carrying paintings down the steps of the castle in Neuschwanstein, Germany in May 1945. Photo: AP/National Archives and Records Administration, Monuments Men Foundation for the Preservation of Art of Dallas​.

Tracking provenance is the detective genre of the museum world, attracting filmmakers and journalists as well as museum professionals.

Provenance is a serious business, a difficult and expensive issue that has always troubled museum professionals and art dealers.

No one knows that better than the National Gallery of Australia, which is currently reviewing provenance in response to the now notorious case of the stolen Shiva. The Shiva, which now appears to have been stolen from a temple in Tamil Nadu before being purchased by the NGA via New York gallerist Subhash Kapoor in 2008, was repatriated to India in September. A sculpture from the Art Gallery of NSW and another from the NGA have also been repatriated.

But provenance is no longer just a tedious task for scrupulous archivists. Cases like Shiva and the repatriation of Nazi-looted artwork have moved provenance from a back end administration issue into the public eye, providing front page news stories and dramatic narratives that capture the imagination of filmmakers.