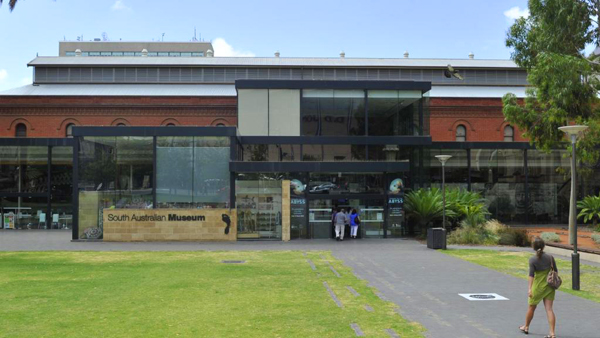 Looking a bit tired — the current exterior of the SA Museum on North Terrace.

On the third level of the South Australian Museum, just after the megafauna exhibit, somewhere between opals and Egypt, and with the giant squid dangling not far away, the director of the cherished old building, Brian Oldman, is explaining why it all needs to change.

“It’s a bit like going around a house that has not been decorated in 30 years and you think ‘It’s a nice house, but it needs updating’,” the enthusiastic Englishman says.

And he’s not just talking about applying a lick of paint and putting up some new curtains.

There are grand plans afoot, some of which could mean the end of a few long-time museum favourites.

Another driver is to dig out more of the 95 per cent of the 4 million museum artefacts, valued at $280 million, that never see the light of day.

Oldman has been the SA Museum’s director since January 2014 and has spent the time coming to terms with his new home and understanding what needs to be done to update its somewhat faded grandeur and occasionally mouldy exhibits.

The 55-year-old arrived in Adelaide with an impressive CV — with stints at the British Museum, the National Maritime Museum and London Zoo.

“It’s important we become a forward-looking dynamic museum,” he says. “We can’t become a museum of museology.”

What he wants is a museum that looks out to the world. The place may be called the SA Museum, but it just can’t be about South Australia. It also needs to be a place of “continuous evolution”.

“Are we just about South Australia? No, we’re not, we are a great international museum and can tell these bigger stories,” he says. Oldman, though, also knows that transformation is expensive, takes time, and can run into resistance.

Especially in a place like Adelaide, which has been known, from time to time, to express a reluctance to change.

What Oldman wants to do to the museum will take 20 years. It will cost more than $100 million. He will also be battling for scarce public funds with other cultural institutions, including the neighbouring Art Gallery of South Australia, which is on the hunt for $250 million to build a contemporary art gallery on the old Royal Adelaide Hospital site just down North Tce.

The most striking change Oldman is planning to introduce will be to the front of the building. It turns out our current museum is not as originally intended. That big front lawn area wasn’t planned. It only ended up that way because the struggling colony of South Australia ran out of money and could not complete the original 1877 design, which was supposed to fill in all that space between the museum’s wings.

“Now is the opportunity to perhaps complete that vision,” Oldman says. “I think it would help us do more, bigger exhibitions. We could get more things on show, we could offer more facilities on North Tce.”

The proposed design would see the building of a covered “museum square” on top of the current lawn area, which “would literally put our doorstep out on North Tce”.

The ambitious idea would create a meeting space out the front of the existing area and leave room underneath for a new 1000sq m exhibition space.

Museums are more than just collections of old objects. Increasingly, the most successful museums and art galleries globally make statements with design and architecture as well as exhibits and displays.