You are here: Home » Articles filed under: 'News' » Article: 'Treaty of Waitangi' 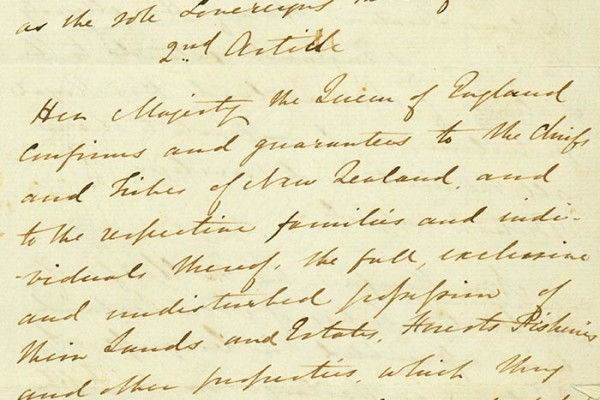 This document is the earliest comprehensive draft of the Treaty. It was written in early February, 1840, by James Busby, the Crown’s official representative. Auckland War Memorial Museum – Tāmaki Paenga Hira. MS-46-B2-F6

The small scale exhibit, situated in the Māori Court, aims to provide an insight into the history of the Treaty from multiple perspectives. It touches on the ongoing Treaty of Waitangi Settlement Process including the work of the Waitangi Tribunal which turns 40 years old in 2016.

With a strong interactive digital element the display brings contemporary voices and personal stories to life, highlighting differing perspectives relating to the Treaty with a focus on iwi from Tāmaki Makaurau. Perspectives from the Treaty partners are all considered.

The late, highly respected academic Dr Ranginui Walker DCNZM worked with the Waitangi Exhibit project team as an advisor, and helped to set the direction and focus of the display. The Museum has been very fortunate to have had the opportunity to work with Dr Walker. His contribution to the project has been highly-valued and represents a further significant legacy from one of Aotearoa New Zealand’s foremost leaders and thinkers in this field.

“We pay a humble tribute to Dr Ranginui Walker as we open this exhibit; we extend our sincere condolences to his wife Deidre and his whanau and we are sorry that he has not been able to view the outcome of his recent work with us”, said Museum Director Roy Clare.

“The display is a pilot that will guide our future thinking. It represents a respectful and exciting addition to our ongoing dialogue with visitors about the Treaty of Waitangi, supplementing the ‘Treaty Trail’ that we installed in 2015 to mark the 175th anniversary of the signing of the Treaty,” he added.

“It’s a further expression of our commitment to He Korahi Māori – a Māori dimension – first  published in ‘Future Museum’ in 2012, and we are grateful to have been able to develop this exhibition in consultation with Ngāti Whatua and Ngāti Paoa who have generously shared their experiences.

“Taking account of public responses to the pilot, we will be extending our conversations about the Treaty of Waitangi with other Tāmaki iwi in the future,” he said.

A timeline starts from first arrivals in Aotearoa and extends to the 1975 land marches. It highlights significant moments in our history, illustrated with taonga from the Museum’s Documentary Heritage Collection.

Visitors will be able to see digital copies of the Treaty and read the English and Māori versions of the Treaty text alongside Professor Sir Hugh Kawharu’s English translation of the Māori text. This feature will enable visitors to compare the versions.

A touchscreen map illustrates the changes in land ownership since the signing of the Treaty to today, and shows where the Treaty was signed right here in Tāmaki Makaurau.

The display features films that have been especially commissioned by the Museum, to reveal the various perspectives about the Treaty and the process of Treaty Settlement. Among other things, visitors will have an opportunity to understand the history and be able to place the financial Settlement in the context of the hurt and wrong that the Crown acknowledges.

The Treaty of Waitangi Exhibit opens 10 March and is free with Museum entry.