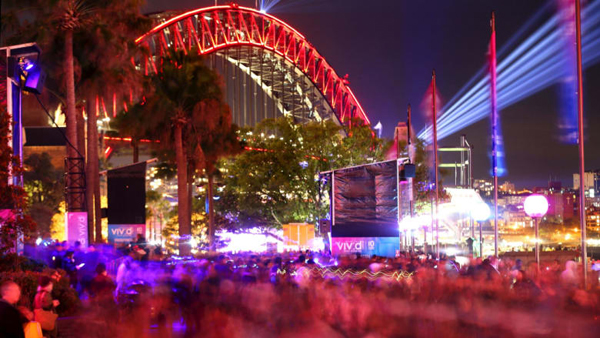 Information previously withheld about the Vivid Festival will now have to be released. Photo: James Alcock.

The NSW Government has been ordered to release a raft of documents, revealing how it lands major tourism events and the money spent on them.

After a three-year legal battle with Fairfax Media, the publisher of the Sydney Morning Herald, Destination NSW must disclose details of investment agreements with key organisations including the Art Gallery of NSW, Vivid and the Sydney Festival.

The decision by the NSW Civil and Administrative Tribunal found the balance of public interest sat in favour of disclosure of the information found in 79 documents withheld by the government body.

Exhibitions of works by renowned artists Picasso and Francis Bacon, the Bangarra theatre’s Corroboree event and the broadcast of Sydney’s New Year’s Eve celebrations are some of the tourism drawcards in the documentation.

The decision overturned Destination NSW’s initial refusal to provide Herald journalist Andrew Taylor with documents used to decide support for events including Vivid, Strictly Ballroom, the Blue Man Group and Yabun Festival for the three years up to and including April 2015, when the request was lodged.

In arguing for the documents’ release, lawyers for Fairfax said the material went “to the very heart of how it (Destination NSW) operates, how it makes decisions as to which events to support, and how it spends taxpayers’ money.”

In refusing the information, the government body said part of its role was to receive commercial proposals for events and evaluate them in a competitive setting to maximise the financial return for the NSW government.

Destination NSW CEO Sandra Chipchase told the tribunal she was concerned the release of the information could deter organisations from staging events in NSW in the future.

Lawyers for the body said the disclosure of commercial-in-confidence information could have the effect of reducing Destination NSW’s ability to negotiate with organisers.

The tribunal heard the release of event organiser’s confidential information would likely result in them losing “any competitive advantage which they currently hold”.

“Events sponsored by Destination NSW further contribute to the economy by causing a ripple effect of increased expenditure across a wide number of industries.

“In this regard, the consequences of disclosure are significant because they could cause great economic and cultural loss to NSW,” the government body argued.

In favouring the release of the documents, NCAT Senior Member Deborah Dinnen said she agreed with submissions that disclosure of the information contained in them could promote discussion of public affairs, enhance government accountability and help ensure effective oversight of public spending.