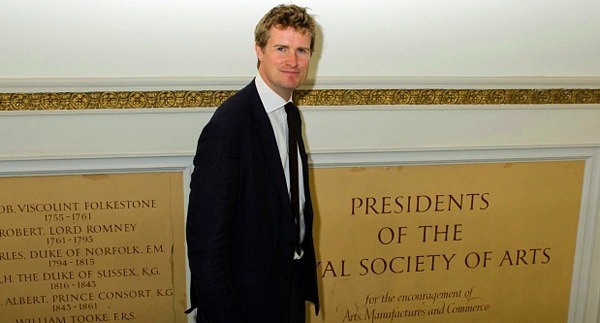 The Labour MP Tristram Hunt will be the next director of the Victoria & Albert Museum (V&A), leaving Westminster for the South Kensington institution. The announcement today (13 January) took many in the museum and political world by surprise.

While he might lack experience running a large institution, Hunt has a strong academic background and has written and broadcast extensively. Before he entered politics he was a university lecturer with a burgeoning career as a TV historian.

Hunt brings “a highly compelling mixture of experience across public life, the arts, history, education and academia,” says the V&A chairman, Nicholas Coleridge, in a statement, adding that “he is an informed and articulate communicator on numerous facets of culture, both historic and contemporary.”

In Parliament he represented Stoke-on-Trent in the English Midlands and became Shadow Education Minister although he left the shadow cabinet when Jeremy Corbyn was elected leader of the party. Hunt has been a vocal critic of Corbyn.

Hunt says that he is “honoured to take on this exciting opportunity”, in a statement, when the V&A is at a moment of “transformation and renewal” with the planned opening of new exhibition galleries in South Kensington, and galleries “in Dundee, China and Stratford”, referring to partnership projects in Scotland, Shenzhen and East London. He is expected to take up the post in the next couple of months.

Martin Roth, whose sudden departure created a vacancy at the top of the V&A, left after Britain voted to leave the European Union last summer. Hunt’s decision to stand down as an MP will trigger a by-election in a constituency where the pro-Brexit party Ukip came second in the last General Election.

When the Wedgewood Museum near Stoke-on-Trent was in danger of losing its historic collection of pottery, Hunt backed a fundraising campaign and deal to save the collection from being sold-off. The V&A acquired the collection, which is now on long-term loan to the museum in Barlaston.

In 2011, after ten years of free admission to the South Kensington museums, including the V&A, Hunt deviated from New Labour orthodoxy and wrote in a comment piece for the Guardian newspaper that “a truly equitable cultural policy might begin to think about reintroducing charges for our national museums,” in order to support museums in the regions.

Last summer he gave a keynote speech to the Institute of Conservation at its conference in Birmingham on the importance of heritage for civic pride and economic regeneration, ending by inviting conservators to visit Stoke and enjoy the “sublime ugliness of the Potteries”.