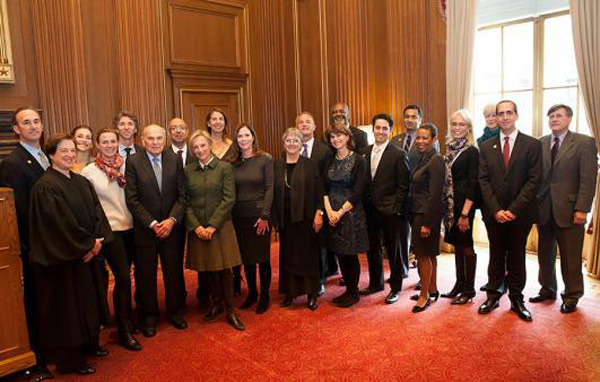 All 17 private members of the President’s Committee on the Arts and Humanities published a letter condemning Trump’s “hateful rhetoric” after Charlottesville.

All but one private member of the President’s Committee on the Arts and Humanities (PCAH), which advises the President on cultural issues, resigned this morning, with a letter to Trump that condemns his “support of the hate groups and terrorists who killed and injured fellow Americans in Charlottesville.”

The letter, posted in full on Twitter by actor and former Obama official Kalpen Modi (Kal Penn), strongly rebukes Trump for his equivocal comments about the violent events in Charlottesville last weekend. “The false equivalencies you push cannot stand,” it reads. “We cannot sit idly by, the way that your West Wing advisors have, without speaking out against your words and actions.”

The letter goes on to list some of the ways in which Trump has attacked the arts and humanities, including his proposal to eliminate the National Endowment for the Arts and his persistent verbal assaults on journalists. It concludes:

Ignoring your hateful rhetoric would have made us complicit in your words and actions. We took a patriotic oath to support and defend the Constitution of the United States against all enemies, foreign and domestic.

Sixteen of the 17 private members of the PCAH signed the document, among them Penn, artist Chuck Close, architect Thom Mayne, writer Jhumpa Lahiri, and Jill Cooper Udall, the former officer of cultural affairs for the State of New Mexico and wife of Senator Tom Udall. Only director George C. Wolfe’s name is missing, apparently because he could not be reached, according to Variety. As the Washington Post notes, these members are all holdovers from the Obama administration; the group had been planning to continue serving until Trump named their successors, but they changed their minds in the past few days and drew up the letter, the Post reported.

They’re not the only ones: two of the President’s business advisory councils decided to dissolve on Wednesday in response to his comments on Charlottesville.

The PCAH was created in 1982 by President Ronald Reagan, who, just two years earlier, had considered dismantling both the National Endowments for the Arts and Humanities (NEA, NEH). It focuses on cultivating arts education, particularly through a program called Turnaround Arts, which aims “to help transform some the nation’s lowest performing schools”; promoting cultural diplomacy and economic growth (the committee led a historic cultural delegation to Cuba last spring); and, less consistently, conducting research on related issues.

The First Lady serves as the PCAH’s honorary chair, and the committee has, in addition to its private members, a slate of government members who serve ex-officio. These include the heads of the NEA, NEH, and the Library of Congress, as well as the director of the National Gallery of Art and the chairman of the Kennedy Center for the Performing Arts. None of the committee’s government members signed the letter of resignation — which, as an editor of the Washington Examiner pointed out on Twitter, is also an acrostic poem of sorts, spelling out the word “resist.”