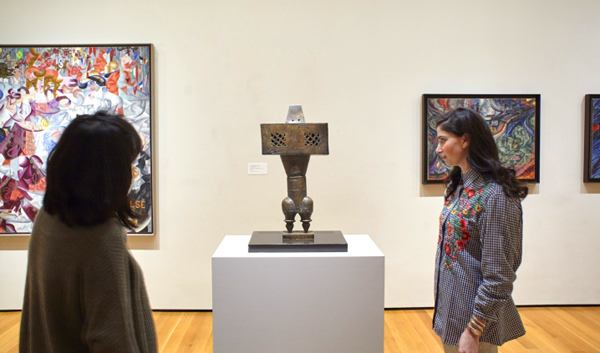 In an unprecedented gesture, the museum has replaced works in its permanent collection galleries with eight by artists from Muslim-majority nations named in Trump’s executive order.

In response to President Trump’s executive order temporarily banning immigration from seven majority-Muslim countries, the Museum of Modern Art (MoMA) has replaced works in its permanent collection galleries with eight by artists from the targeted nations. Though it might sound small, the rehang is an unprecedented gesture in the museum’s history, instigated and executed by staff who wanted to react to unsettling political circumstances.

Organized by a group of curators across a number of departments, the reinstallation occurred last night on the fifth floor, following an initial discussion two days after Trump issued the order on January 27. The new works span an array of mediums, from a painting by the Sudanese-born Ibrahim El-Salahi to an earthwork by the Iranian-born Marcos Grigorian to a video by Iranian artist Tala Madani. There are also sculptures by Iranian-born artists Parviz Tanavoli and Siah Armajani as well as works on paper by Zaha Hadid, who was born in Iraq, and Iranian-born Shirana Shahbazi and Charles Hossein Zenderoudi.

Curators wanted to select works that stood alone as extraordinary examples of modern art from their regions, but the rehang was also constrained by a short time frame, a need for easy installations, and the question of whether a potential piece would work well in the context of MoMA’s permanent collection galleries. For such reasons, artists from Libya, Somalia, Syria, and Yemen are not represented in this effort, but MoMA will also screen a series of films by artists from the affected countries later this month. And curators are organizing another rehang that will occur next week, when the museum reopens the remainder of its fifth-floor galleries, which are currently under renovation.

“We want the gallery to be a place of freedom, where people can find a safe haven,” Christophe Cherix, MoMA’s chief curator of drawings and prints, told Hyperallergic. “A lot of artists in our holdings of the ’20s, ’30s, and ‘40s came from abroad. The [executive order] just made us think that it could be interesting to think about that history in relation to today and bring into the galleries work by artists we deeply care for whose nations are part of the current ban.”

These less commonly seen pieces replace familiar works of Western art by Picasso, Matisse, James Ensor, Francis Picabia, Umberto Boccioni, Oskar Kokoschka, and Alberto Burri. Rather than being confined in one room, they’re spread across multiple galleries, each accompanied by a statement clearly expressing MoMA’s intention “to affirm the ideals of welcome and freedom as vital to this Museum, as they are to the United States.”