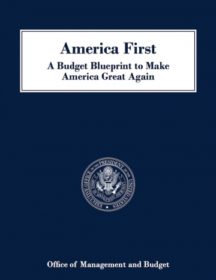 A slew of independent agencies would be done away with, while defense spending would go up by $54 billion, under the president’s proposed budget.

Last night, US President Donald Trump released his proposed federal budget for 2018, which seeks to eliminate the National Endowments for the Arts and Humanities (NEA, NEH), the Corporation for Public Broadcasting, the Institute of Museum and Library Services, the Woodrow Wilson International Center for Scholars, and about a dozen other independent agencies.

The budget also calls for extensive cuts to social programs like Medicaid, food stamps, Social Security benefits for Americans with disabilities, and student loan programs, while advocating for a $54 billion increase in military spending — including $1.6 billion to begin construction of a wall along the US–Mexico border. In total, Trump’s proposed federal budget for financial year 2018 — humbly titled “America First: A Budget Blueprint to Make America Great Again” — makes a case for $4.3 trillion in cuts and $717 billion in additional spending over the next decade. Trump’s proposal will not be adopted wholesale by lawmakers, but be used by members of Congress as a kind of benchmark or guide in crafting the federal budget for next year.

Trump’s federal budget proposal makes good on his promises to do away with the NEA and NEH, which he first articulated the week before his inauguration and subsequently reiterated in March with the release of his preliminary budget outline. In spite of this, both agencies recently earned small funding boosts for fiscal year 2017 with the passage of a spending bill earlier this month, bringing their annual budgets to $150 million each. In light of the latest budget document, the recent outpouring of support for the NEA and NEH — from artists, arts administrators, politicians, and the public — seems likely to continue and accelerate.

Update, 1:55pm: In response to the Trump budget proposal, the National Endowment for the Humanities released a proposed appropriations request for financial year 2018 seeking $42 million “for the orderly closure of the agency.” According to NEH Deputy Chair Margaret Plympton, “This amount includes funds to meet matching grant offers in effect as of October 1, 2017, as well as funds to cover administrative expenses and salaries associated with the closure.” Plympton is serving as the NEH’s leader following the resignation yesterday of the agency’s chair, William D. Adams. Read the full NEH 2018 appropriations request proposal here.

Update, 6:30pm: The National Endowment for the Arts has also released a proposed appropriations request for fiscal year 2018 to obtain the necessary funds for an orderly shutdown, requesting $29.019 million. The agency’s request says it “will require funding to support a reduced staffing level and administrative costs needed to effectively shut down operations.” Read the full NEA appropriations request document for 2018 here.