This collection of hei tiki displayed in a spiral form makes is a centrepiece in the Kura Pounamu exhibition at Tuhura Otago Museum. Photo: Linda Robertson.

Kura Pounamu has toured the world, but is finally among its own. Bruce Munro talks to Gerard O’Regan and Dougal Austin about the exhibition that explores the history, meaning and stories of Te Waipounamu’s most-prized material treasure. 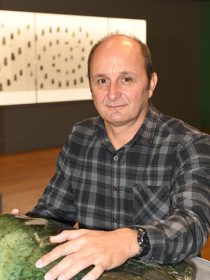 When Gerard O’Regan started work at the National Museum, later to become Te Papa, as a teenager during the 1980s, the late Piri Sciascia was a dynamic, driving force in the Maori renaissance.

Already elevated to Director of the Council for Maori and South Pacific Arts — and later to become kaumatua to the governor-general, prime minister and Cabinet — Sciascia was at the time also a leading figure in Te Maori, the exhibition that wowed United States audiences before returning to New Zealand to do the same.

A key element in the landmark Te Maori exhibition of priceless traditional artwork, which came to Dunedin in 1987, was a pounamu touchstone, Te Mauri o te Maori. That large emerald-green stone had been collected from Southern mountains by New Zealand’s foremost pounamu expert the late Russell Beck and Sciascia, who was of Ngati Kahungunu and Kai Tahu descent.

A generation later, O’Regan is overseeing his first major Maori exhibition in his role as Curator Maori at Tuhura Otago Museum.

That exhibition, Kura Pounamu: Our Treasured Stone, has opened in Dunedin.

It brings to the South for the first time an unrivalled touring collection of ancient and contemporary pounamu pieces.

It too has travelled the world before coming here, and it too has a link to Sciascia.

One of the new trustees of Te Mauri o te Maori, which resides in Southland, is Sciascia’s son, Tumarangai Sciascia.

“He asked if we might be able to bring Te Mauri o te Maori up from Southland to join the exhibition,” O’Regan says.

“That’s a special [local] addition to the exhibition here.

“So, we’ve got these wonderful historical threads.”

First exhibited at Te Papa Tongarewa, Wellington, in 2009, Kura Pounamu then toured China between 2012 and 2014, and was shown in Paris in 2017, one of the exhibition’s lead curators, Te Papa’s Curator Maori, Dougal Austin, says.

In 2019, it was on display in Christchurch and Nelson.

And now Kura Pounamu is here.

“Otago Museum cares for and displays a lot of taoka pounamu … but this exhibition shares a broader narrative and focus than we’d normally have a chance to see,” O’Regan says.

“It’s lovely to see our whanauka’s awesome mahi that has travelled internationally now shared here in the South.”

It was not unusual for pounamu tools to be later reshaped as adornments, as shown in this series demonstrating the transformation from toki to tiki. Photo: Linda Robertson.

The exhibition is in the Museum’s 1877 gallery. Its centrepiece is an impressive wall of hei tiki displayed in a spiral pattern.

“The pounamu is from … Te Waipounamu, so it is fitting that it is coming back home to be seen by the people and communities it came from.”

O’Regan says Kura Pounamu is an exhibition for everyone living in Aotearoa New Zealand.

“If you think of how many New Zealanders have a taoka pounamu around their neck — Maori, Pakeha, katoa — pounamu remains special to a very large part of our community.

“This exhibition offers the opportunity for insights in a way that only a specialised, dedicated, carefully curated exhibition can.”

There are multiple ways to see, understand and engage with each piece in the exhibition, O’Regan says.

A term used to describe this is “the biography of artefacts”.

“It’s recognising that as taoka move through time, different aspects of their stories emerge and develop.

“Perhaps more than anything we see that with taoka pounamu.

“So, this exhibition is a huge celebration of that whole multiplicity of story.”

“Particularly with the introduction of steel tools for carving … a whole lot of pounamu toki, adzes, got turned in to hei tiki.

“You can still see something of the original adze blade form in [some] hei tiki.”

To enrich visitors’ experience, Te Runanga o Ngai Tahu has funded Kai Tahu kaiarahi, guides, who will be present during anticipated busy periods at the exhibition.

“It’s a way of keeping the exhibition warm … They will be providing opportunity for a bit of korero.

“Going and seeing things is wonderful. But if you can have a natter with someone about it, that adds another level of engagement.”

Toki, adzes, were one of the earliest uses of pounamu by Maori. Photo: Linda Robertson.

The Sciascia linkages between this and present exhibitions and the connections many of us have to pounamu are just some of the threads woven through Kura Pounamu.

O’Regan, the son of Sir Tipene O’Regan, former Ngai Tahu Maori Trust Board chairman, has ties to pounamu and this exhibition that stretch in several directions.

When O’Regan jun was heritage manager for Kai Tahu, one of his jobs was to help the iwi plan to manage its pounamu resource. As part of the Kai Tahu Treaty of Waitangi settlement all the natural pounamu resource in the South Island was re-vested in the iwi.

“We had the challenge of figuring out how we were going to manage that resource … It was a very exciting part of my work.”

He and others involved visited various pounamu sources. The iwi also funded a pounamu research project led by Russell Beck and Michael Mason.

“Both of those men have passed on, but Russell’s stories and interpretations are here in this exhibition.” 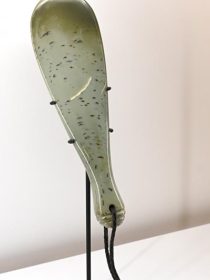 Kura Pounamu also has a section examining traditional ways of shaping and working with pounamu. It includes video of Auckland University academic Dante Bonica demonstrating the making of stone tools and taoka.

“For a lot of my time up in Auckland [studying for a PhD in indigenous rock art] my office was next door to Dante’s.

“So, for me personally, when I go through the exhibition … there’s a whole lot of wonderful posts in my museological, archaeological past, which I see coming together here.”

The paths of Otago Museum’s curator Maori and that of his Te Papa counterpart, Austin, who co-curated this exhibition, have crossed frequently.

Austin is of Kai Tahu whanui descent, raised in Colac Bay, Southland. During the 1980s, he and O’Regan both studied archaeology under distinguished Kai Tahu archaeologist Professor Atholl Anderson, at the University of Otago.

“We were on the famous Shag River Mouth excavation together,” O’Regan recalls.

“Atholl was a bit of a mentor for both Dougal and myself.”

The hundreds of pieces in Kura Pounamu are gathered from throughout the motu, the islands of New Zealand, but of course they all originated in Te Waipounamu.

“There is no other cultural material more highly valued by Maori than pounamu,” Austin says.

“It’s so deeply embedded in the culture it is inseparable, particularly so in Te Waipounamu.”

When the ancestors of modern Maori arrived on these shores about 750 years ago they were already master stone workers, Austin says.

But they had never previously encountered pounamu.

“Very quickly after first settlement they explored the landscape and discovered the available stone sources.”

They could use pre-existing techniques and technologies to shape most of the stones, except for pounamu.

“We think it probably took them a hundred years to really start using pounamu to much of an extent.

“But what was made from it was extremely durable.

“For tools, it could hold a sharp cutting edge much better than other stone types.

“It’s a very beautiful stone too.” 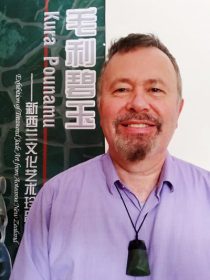 Dougal Austin, who grew up in Colac Bay, Southland, is one of Te Papa Tongarewa’s lead curators for the Kura Pounamu exhibition that has toured the world and is now on show at Tuhura Otago Museum. Photo: Supplied.

Tools were probably the primary early use for pounamu, Austin says. Then weaponry, particularly the mere pounamu, a symbol of rangatiratanga, chieftainship. And also adornment.

Sometimes, it was a mixture.

“Some of the small tools, like chisels, when not in use could have been worn to look after them and serve as a pendant.

“The pounamu rings that were put around the legs of kaka being used as decoys during hunting; they are often thought of as an adornment, but their origin is fowling.”

Austin has a strong affinity for the largest of the four touchstones in Kura Pounamu, the 170kg Te Hurika, which has distinctive snowflake patterning.

Back when Austin was putting the exhibition together, he was looking for touchstones to include.

“That was part of the impetus for Te Runanga o Makaawhio, the South Westland people, having one of the big pieces of pounamu they had smoothed down as a touchstone.”

The stone had been among a large quantity of pounamu stolen from source on the Cascade Plateau, during the the last decades of last century. Some of it, including this stone was recovered and returned.

“There was a huge amount of theft, on a large scale.

“It was a turning point from holding a lot of mamae, hurt, and turning it around in to a positive.”

During the past 13 years, Austin has been involved in all, and visited most, of the Kura Pounamu exhibitions, in China, France and New Zealand.

“Now we are at the ultimate stage, where it is back touring amongst its own people, who have the strongest connection of all to pounamu.”